The very ancient city of Madurai is one of the oldest cities of India and dates back to several centuries before Christ. Situated some 472 km from Chennai, Madurai is located on the banks of River Vaigai. Madurai is also the second largest city of Tamil Nadu after Chennai and covers an area of 109 sq km. Madurai was home to the ancient Tamil Sangam and also hosted the literary summit that produced the first Tamil epic and many other famous literary works. Madurai is also one of the most sacred temple towns of India. The presence of Meenakshi Temple, around which the city evolved, has made Madurai one of the most widely visited pilgrim as well as a tourist destination. The city is not overly crowded and has a population of around 1 million. Major part of the population speaks the native language Tamil but English is also used. The people here are friendly, caring and have a deep respect for their culture and heritage which indeed is very rich. In the present world, it is a fast paced commercial center taking the competition head. The city is mainly famous for the hand loom products and tourists can purchase the local apparels and items as a memorabilia of their visit to Madurai.

Madurai is almost synonymous with the famed Meenakshi Temple. Located on the banks of River Vaigai, Besides displaying its cultural legacy, Madurai has also emerged as a commercial hub, being a well-known producer of textiles and exporter of jasmine flowers. 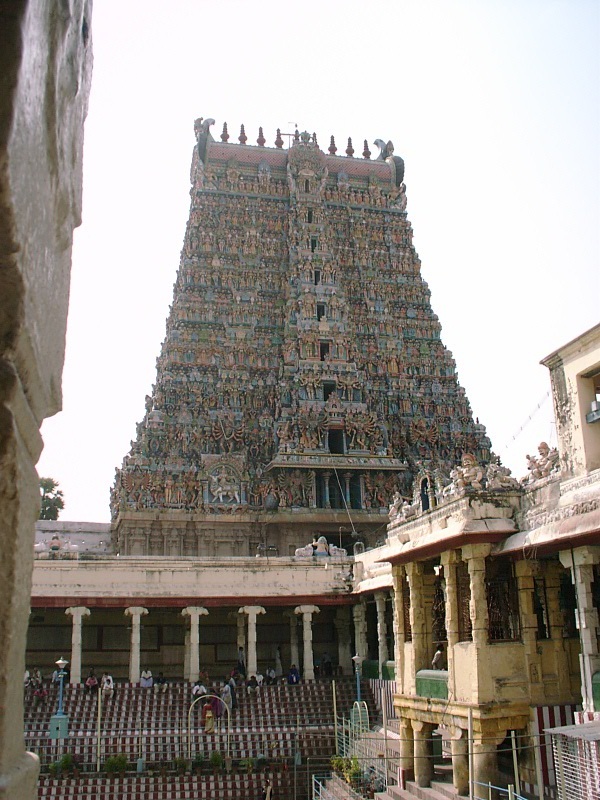 It was the capital city of the Pandya Kings of South India. The Pandya King Kulasekara built the Meenakshi temple in the centre and around it he built a city resembling a lotus flower. The streets of Madurai go around in concentric circles, closing in on the centre.
Madurai was originally a forest called Kadambavanam. It is believed that Lord Shiva appeared on the day the city was to be named. Drops of nectar fell on to the city from his locks and the city was named ‘Madhurapuri’ and eventually Madurai meaning sweetness in Tamil.

Rail: Direct train services from Madurai to many cities in India are available. Many trains are running between Madurai and Chennai daily.

Road: Many private operators are providing deluxe AC and non-AC luxury coach buses from Madurai to many cities in the South India, including Chennai, Trivandrum, Coimbatore, Trichy etc. Tamil Nadu State Road Transport Corporation buses connect Madurai with other local cities in and around. Super fast buses of TSRTC runs between Madurai and Chennai.

Although Madurai is famous as a temple town, it is also a fascinating shopping place. Madurai has retained its fame as a textile center from ancient times. The hoards of textiles and tailoring shops around the famed Meenakshi Temple are ample proof of this.

While shopping in Madurai, you can buy locale manufactured cottons and batiks from Puthu Manadapam Market, just outside the eastern entrance of the Meenakshi Temple. The interesting things about the rows of tailoring shops here is that they can stitch a dress for you in an hour or two. You can also pick up the famed Madurai silk and handloom sarees from big textile showrooms like the famous Hajeemoosa Textiles. If you want to buy souvenirs in wood or brass, you should visit the Cottage industries emporium and other government emporiums nearby. Madurai is also famous for its ethnically crafted jewelery if you want to indulge in the pleasure of buying gold and silver ornaments.

Madurai may not be shoppers' paradise, but here you can spend your time looking around the market and just chilling out amidst the colorful chaos of the marketplace. The hustle and bustle of the market packed with myriad of people jostling about over things they love to haggle.

Indeed shopping in Madurai can be a fun. Plan a visit to Prithu Mandapam Market that is a famous market in Madurai, based just inside the eastern entrance of Meenakshi Temple. Here you can buy cotton and batiks, for which Madurai is famous. You can sit back on the Pottramarai tank and let the essence of Maduari seep in you.

Madurai has also been a textile centre for long. Here skilled tailors can reproduce your dress with cottons and printed fabrics at Puthu Mandapam. You can also visit the government Poompuhar Handicrafts shop, the Cottage Arts Emporium and the Madurai Gallery for hand-woven silks and cottons, bell-metal lamps, bronze images, wood and stone carvings.

The city of Madurai in Tamil Nadu is synonymous with temples. Hotels in Madurai offer a comfortable and pleasant stay for the religious tourist and the pleasure traveler alike.

Hotels in Madurai have a range of packages to suit the budget of all categories of tourists. Most of the hotels in Madurai are conveniently located in the main city near the pilgrim centers and the railway station.

Some of the prominent hotels in Madurai are: