Kumbakonam, also spelt as Coombaconum in the records of British India, is a town and a special grade municipality in the Thanjavur district in the southeast Indian state of Tamil Nadu. It is located 40 kilometres from Thanjavur and 273 kilometres from Chennai and is the headquarters of the Kumbakonam taluk of Thanjavur district. The town is bounded by two rivers, the Kaveri River to the north and Arasalar River to the south. According to the 2001 census, Kumbakonam has a population of 160,012 and has a strong Hindu majority; but it also has sizeable Muslim and Christian populations.
Kumbakonam dates back to the Sangam period and was ruled by the Early Cholas, Pallavas, Medieval Cholas, Later Cholas, Pandyas, the Vijayanagar Empire, Madurai Nayaks, Thanjavur Nayaks and the Thanjavur Marathas. It rose to be a prominent city between the 7th and 9th centuries AD, when it served as a capital of the Medieval Cholas. The town reached the zenith of its prosperity during the British Raj when it was a prominent centre of European education and Hindu culture; and it acquired the cultural name, the "Cambridge of South India". In 1866, Kumbakonam was officially constituted as a municipality, which today comprises 45 wards, making it the second largest municipality in Thanjavur district.
Kumbakonam is known as the "temple town" due to the prevalence of a number of temples here and is noted for its Mahamaham festival which attracts people from all over the globe. The main products produced are brass, bronze, copper and lead vessels, silk and cotton cloths, pottery, sugar, indigo and rice.

Kumbakonam, a picturesque temple town located in Tanjavur District of Tamil Nadu, is known for its age old temples including famous Kumbeswarar and Sarangapani temples. Kumbakonam literally means the place of pot (Kumbam). This beautiful town is naturally set between the rivers Cauvery and Arasalar. This city was the capital of the historically important Chola dynasty ruled the region during the medieval period.

Legends points the birth of Kumbakonam towards the period in which a huge pralaya (flood) occurred to destruct the whole universe. Lord Brahma collected all tools and Vedha’s Amrutham, which are required to recreate the Universe, in a pot and preserved it on the top of Mount Meru. In the flood, the pot washed away and stopped at a holy place. Lord Shiva had broken this pot at that place and the Amrutham from the pot was filled in two tanks. The parts of the pot and the Amrutham merged together to form the idol of Kumbeswar, a form of Lord Shiva. The place at which Kumbeswar got placed is Kumbakonam.

Apart from Kumbeswarar and Sarangapani temples, there are many other important temples, numbering around thousand, in and around Kumbakonam. A rare temple dedicated to Lord Brahma, Sri Abhimugheswarar, Kasi Vishwanathar, Nageswaran, and Ramaswamy are some of the temples. Kumbakonam is famous for the Kumba Mahamaham, celebrated once in 12 years. The Mahamaham tank in which devotees take holy dip is a prime attraction in Kumbakonam. It is believed that a visit to this temple town will wash off all sins committed in the life. 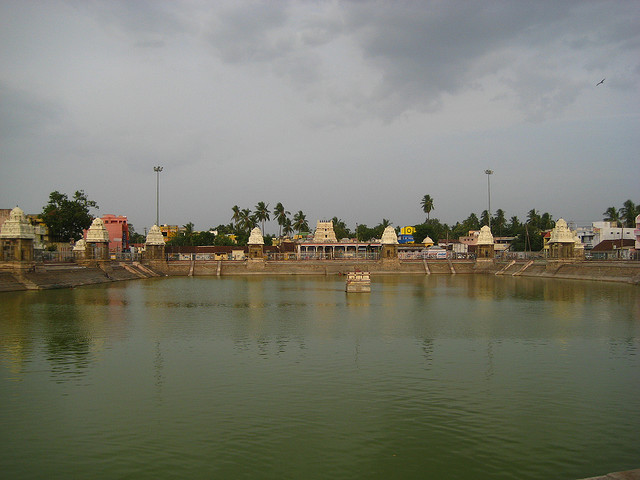 The name "Kumbakonam", roughly translated in English as the "Jug's Corner",[2] is believed to be an allusion to the mythical pot, the Sanskrit kumbha of the Hindu god Brahma, which according to Hindu legend, contained the seed of all living beings on earth. The kumbha is believed to have been displaced by a pralaya or deluge and ultimately came to rest at the spot where the town of Kumbakonam now stands. This event is now commemorated in the Mahamaham festival held every 12 years.

Kumbakonam was a natural sister city to the kingdom of Tanjore and the history of the two cities run in parallel. Initially built by the Cholas, the city rose to it’s greatest splendour during the 16th and 17th centuries after which the Nayakars (descendants of Vijayanagara Empire) and the Marathas lay claim to the land.
When the local kings fell to the British, the city fell in significance as the European rulers did not find any strategic significance in building a power centre in here. But the town has retained it’s significance as a pilgrimage location throughout it’s history.

Air: The nearest airport to Kumbakonam is Trichy at distance of 96 km away. Domestic flights operate from this aerodrome. Regular flights are available to Chennai International airport. Taxis are available from Trichy to Kumbakinam and it charges about Rs 1,000. The major international airport is at Chennai at distance of 273 km. Prepaid taxi is available from Chennai to Kumbakonam charging about Rs 2,500.

Rail: Kumbakonam railhead is connected by trains from Chennai, Quilon, Tirupathi and Rameshwaram. Travellers can use trains to reach this place comfortably from Chennai and other places.

Kumbakonam is known for the numerous products and also for the various attractive shopping items. The temporary shops in the streets and permanent shopping places display all varieties of attractive goods, textiles, handicrafts, brassware and Jewels. Silk materials, Sares, modern textile goods, silver, brass and gold jewelries are all available in the shops of Kumbakonam. Temple and religious materials are also available in plenty in this temple town.

Kumbakonam is famous for aesthetically carved Panchaloha idols, silk products, brass and metal wares, electrical goods such as lamps. The shopping at this place is an experience as the price tags are moderate and avenues for best quality items are more.