Nalanda, lies about 100 kms south-east of Patna, is believed to have been one of the greatest centers of learning in the ancient times. It is also one of the important Buddhist pilgrimage centre as Nalanda was frequently visited by Lord mahavira and lord Buddha in the 6th century BC. It is also supposed to be the birthplace of Sariputra, one of the Chief disciples of the Lord Buddha.

The place was founded in the 5th century AD and is famous as the ancient seat of Buddhist learning. It is believed that 2,000 teachers and 10,000 monks from all over the Buddhist world lived and studied here. The ancient past of Nalanda stands proud today though in ruins. 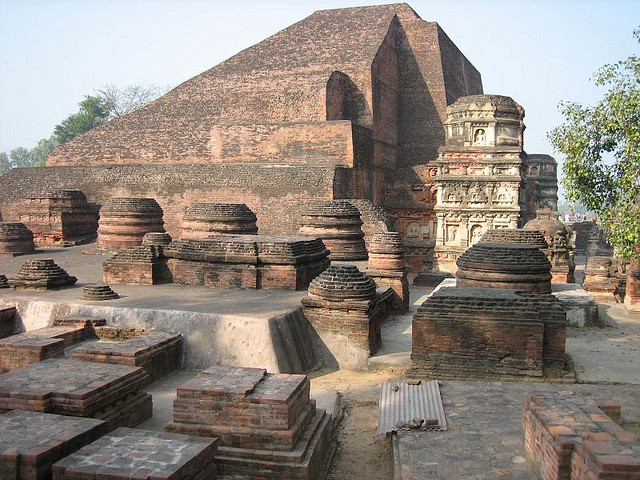 The history of Nalanda is deeply connected with the Buddhism during its early stages. Buddha himself visited Nalanda several times.

THE history of Nalanda, the ancient university town of Bihar, goes back to the days of Buddha and Mahavira in the Sixth Century B.C. The town was home to Nalanda Mahavihara, a monastic university of international repute.

There are many versions of what the term nalanda means. One is that nalam (lotus) and da (to give) combine to mean "giver of the lotus". Since the lotus is supposed to represent knowledge, Nalandameans "giver of knowledge". The university of Nalanda, a suburb of Rajgir in ancient times, is just off the main road from Rajgir to Patna.

Ancient Buddhist sources say that Asoka, the Mauryan emperor (Third Century B.C) built a temple at Nalanda. It was a flourishing hub where the philosopher and alchemist, Nagarjuna, studied and taught in the Second Century A.D. However, excavations have not revealed anything to suggest that the site was occupied before the Gupta period (Fifth Century A.D.), the earliest finds being a copper plate of Samudragupta and a coin of Kumaragupta (414-455 A.D.). Fa-Hien who visited in the Fifth Century A.D. makes no mention of the massive monastic establishments at Nalanda. But Hiuen Tsang who came in A.D 637 during Harsha's reign (606-647 A.D.) refers to the great monastery that Harsha endowed with liberal grants.

Modern District of Nalanda with HQ Biiharsharif was established on Nov 9, 1972. Earlier it was Biharsharif sub-division of Patna district.

Lok Nayak Jayaprakash airport at Patna is the nearest airport, which is 100 km away from Nalanda. This airport is connected to major Indian cities like Mumbai, Delhi and Kolkata. Taxies are available from the airport to Nalanda and fare is about Rs 2000.

Patna is the ideal base to visit Nalanda, which is dotted with a number of good hotels including deluxe and budget hotels. Equipped with all the necessary amenities the hotels in Patna provide a pleasant stay to guests.