Howrah or Haora is an industrial city, located on the west bank of the Hoogli River. It it is a twin city of Kolkata. The two cities are connected by the Howrah Bridge (also known as Rabindra Setu), the Vidyasagar Setu (also known as the second Hooghly Bridge) and ferry services between various jetties in the two cities. It serves as a major rail and road transportation hub for the Kolkata metropolitan region. 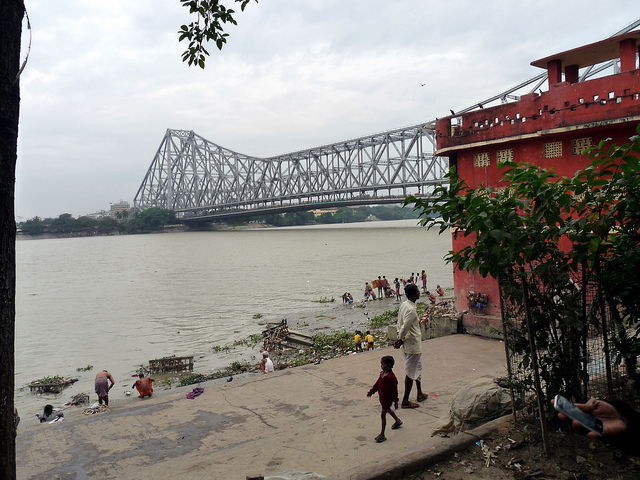 History of Howrah City dates back to 500 years. But, the district has thousands of years of rich heritage in the form of the great Bengali kingdom of Bhurshut. Venetian explorer Ceasare de Federici, who travelled India during 1565–79, mentioned a place called Buttor in his journal circa 1578.[3] As per his description, this was the place up to which large ships could travel (in the Hoogli River) and so, it was the dock for loading and unloading goods for those ships.[3] This place is identifiable with the modern day neighbourhood Bator of Howrah.[3] Bator was also mentioned in the Bengali poetry Manasamangal written by Bipradas Pipilai in 1495.[4]
In 1713, the Bengal Council of British East India Company, on the accession of the Emperor Farrukhsiyar, grand son of Aurangzeb, to the throne of Delhi, sent a deputation to him with a petition for a settlement of five villages on west bank of Hooghly river along with thirty-three villages on the east bank.[5] The list of villages appeared in the Consultation Book of the Council dated 4 May 1714. The five villages on the west bank on Hooghly river were: 'Salica' (Salkia), 'Harirah' (Howrah), 'Cassundeah' (Kasundia), 'Ramkrishnopoor' (Ramkrishnapur), and 'Battar' (Bator): all identifiable with localities of modern day Howrah city.[6] The deputation was successful except for these five villages.[6] By 1728, most of the present day Howrah district was part of either of the two zamindaris: Burdwan or Muhammand Aminpur.[6] After Battle of Plassey, as per the treaty signed with the Nawab of Bengal Mir Qasim on 11 October 1760, Howrah district (then part of Burdwan) came under control of East India Company.[7] In 1787, the Hooghly district was formed, and till 1819, the whole of the present day Howrah district was added to it.[8] The Howrah district was separated from the Hooghly district in 1843.[9]
With the establishment of the Howrah Railway Terminus in 1854 started the most important phase of its industrial development. Flour mills were established in 1855, followed by Jute mills and around 1870s, there were five mills near Howrah station.[10] The Howrah–Shalimar Railway Section and the Shalimar Terminus were constructed in 1883.
By 1914 almost every major city in India was served by the Railways and the increased demand for its rolling stocks and repair works resulted in the establishment of railway workshop in Howrah. The light engineering industry grew up after 1914.[11] This industrial boom continued throughout the second world war and brought with it rapid urbanisation phase in unplanned manner creating slums near the industrial establishments.

Kolkata is the nearest airport to Howrah which is adjacent to the city. Kolkata airport receives flights from all part of India and all major countries in the world. From the airport, you can either catch a bus or hire a taxi to your hotel in Howrah.

Howrah Station is the most important station in West Bengal after the capital city Kolkata. In fact, Howrah is the gateway to Kolkata as all trains to the capital city pass through Howrah. There are trains to and from all major cities of India.

Howrah is well connected to all parts of the state by transport buses as well privately operated coaches. Howrah borders Kolkata, which makes it quite easy to travel to the capital city. The distance between their city center will not be more than 25 Km. One can always go to Kolkata to catch a bus to other cities, but there is a major bus stand in Howrah as well.