It is not often that a certain landmark becomes the very identity of the entire city. The Howrah Bridge or the Rabindra Setu, also termed as the gateway of Kolkata, is one such structure which due to its grandeur and majestic appeal has been the face of Kolkata for over a century. Constructed on the river Hoogly, the bridge connects the city to the Howrah district and effectively the Eastern part of the country.

This steel structure is 705m long and boasts of 8 lanes collectively 97m wide. Reportedly over one lakh different vehicles and 2 million commuters traverse the bridge to either direction every day. The ships and boats often enter the Kolkata harbor after traveling under the bridge. Recently it has been illuminated and is a sight to behold during evenings.

The magnificent Howrah bridge has been dominating the Howrah landscape from even freedom. Opened to Public in 1943, Howrah bridge is a cantilever truss bridge and one of the largest of its kind in the world. Constructed over Hooghly River, Howrah bridge connects the twin cities of Howrah and Kolkata. Earlier Howrah Bridge was a floating pontoon bridge built of timber in the year 1874. It was then replaced by the current bridge which was renamed to Rabindra Setu in 1965. Today, it is used by more than 150000 vehicles and 400000 pedestrians everyday. The best time to view the bridge is during night time when the entire bridge is illuminated. Though traveling on it might not be a very memorable experience as it is often jam-packed with vehicles. 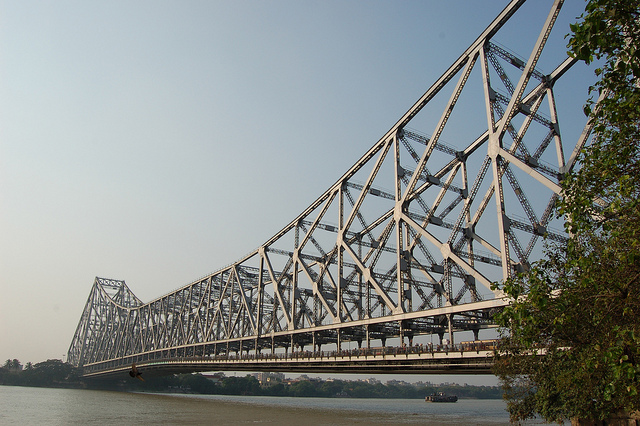