Alappuzha, also known as Alleppey, is one of the exotic backwater sites with beautiful blue lagoons, canals, backwaters and beaches. It lies between the cities of Cochin and Trivandrum. It was entitled as the 'Venice of the East' by Lord Curzon because of its large network of canals passing through the heart of the city. 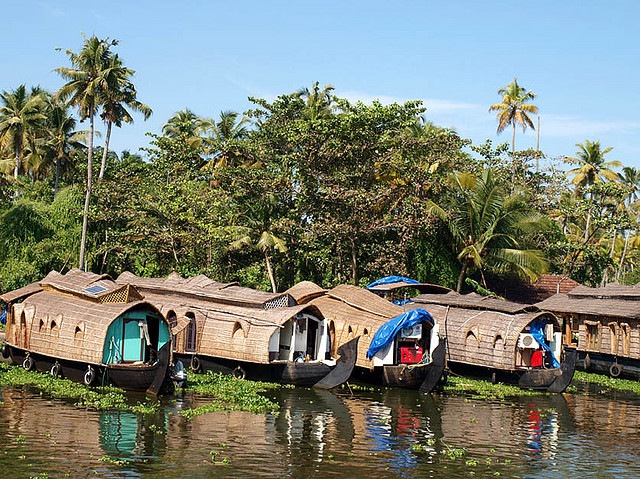 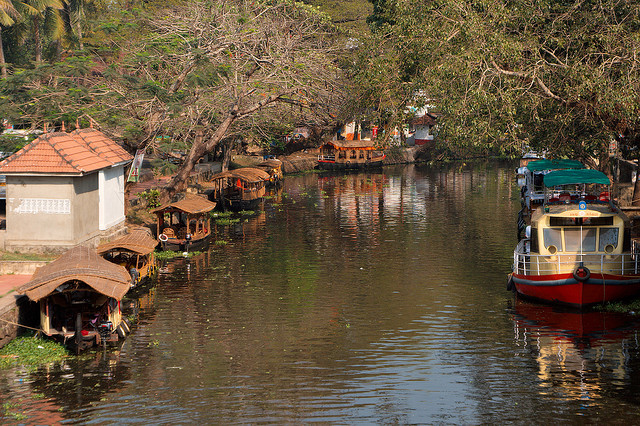 Before the Dutch took over this place, the Portuguese were the predominant rulers of this place. Later Maharaja Marthandavarma came into power and he gave ample importance to the developmental works of the place. Slowly it became a very busy commercial place attracting merchants from all over. This resulted in the establishment of a number of coir factories producing coir-related goods of quality. The first coir factory was developed by an English sea captain and soon others followed suit. The first Anglican Church was built in 1816 by the Christian missionaries whose headquarter was in Alappuzha.

By Rail: Alleppey is well connected by train to Cochin and Trivandrum.

By Road: KSRTC buses are plenty, which are connecting all the major cities in Kerala.

Alleppey is pretty well known for its coir products and carpets. Almost every nook and corner in Alleppey has some shop selling coir products and carpets. Since these two items are easily available and have a reasonable price, they are always in high demand among tourists. In coir, one can find products like mattresses, rugs, doormats, etc. that are much in demand due to the good quality and the reasonable price. One can find carpets in different sizes, shapes and colors and can choose from a wide collection to suit one's personal taste.

Alleppey is also famous for its spice plantations. The markets over here sell all Indian spices both rare and the common ones. So you can shop for those rare herbs and spices and take the spice of India back to your home!

Hotels in Alleppey offer a blend of the rustic homeliness of Alleppey town and modern amenities. There are number of hotels and resorts in Alleppey with world-class accommodation that cater to the needs of tourists.

The hotels and resorts in Alleppey, the enchanting backwater destination of Alleppey, popularly known as the 'Venice of the East' has holiday packages with an array of leisure activities like boating and fishing. A boat cruise on the traditional houseboats (kettuvallams) will be an unforgettable experience.
The annual vallamkalli or boat races in Alleppey are a truly exciting and spectacular event.

Alleppey has a range of hotels-from fascinating beach resorts to budget hotels.

Some of the prominent hotels in Alleppey are:

Nehru Trophy Snake Boat Race
Punnamada Lake near Alleppey is host to the spectacular snake boat races that are annually held on the second Saturday of August. This competition is named after India's first prime minister Jawaharlal Nehru. The story goes that when Nehru say his first boat race, he got so into the competition that he jumped right into the boat that won the race, so the event became named the Nehru Trophy Snake Boat Race. Each and every 50 meter long wooden snake boat that is in the race is manned by over a hundred oarsmen. Such man power allows these boats to travel at remarkable speeds. The event traditionally commemorates the carrying of idols to their abodes in the state's magnificent temples. The trophy is a silver snake boat mounted on a wooden pedestal.

Backwaters
Made up of small canals, lakes and lagoons they have shaped the lifestyle of the people of Kerala, Alleppey has come to be known as the "Venice of the East". Alleppey's calm backwaters are one of the most visited spots in Kerala and have become a popular honeymoon destination and beautiful setting to view bird and animal life. One of the best way to enjoy the backwaters is by renting a houseboat.

Houseboats
A boat cruise along the backwaters of Alleppey is one popular way to experience the entire area, after all, Kerala's network of navigable backwaters covers an amazing 900 kilometers. Honeymooners especially are drawn to the peaceful atmosphere of the waterways. A backwater cruise on a houseboat allows you to see the scenic manmade islands and beautiful sights of coconut and paddy fields. You will want to book a houseboat in advance since they are always in high demand. These giant 80-foot long houseboats are altered traditional boats from the area. These houseboats are luxuriously equipped with all of the modern amenities you would need or even want. There are single-bedroom or even four or five-bedroom houseboats available, with living rooms, bathrooms, an equipped kitchenette, and even air-conditioning. You do not have to maneuver your own houseboat. You get a crew of a cook and a bearer along with two oarsmen to drive your way.

Kettuvallams
These boats also called “Rice Boats” were once used to transport men and goods across the backwaters. Now used as a houseboat, the kettuvallams ferry you across the meandering tranquil backwaters, navigating you through the rural life of Kerala folk. Due to its huge popularity among local tourists as well as foreign tourists, houseboats or kettuvallams are now available with a/c facilities and other convenient amenities.

Snake Boat Race
Snake Boat races are held on the 2nd Saturday of August on the Punnamada Lake every year. The 50m long wooden boats are painted and decorated with flowers for the highly competitive sport where each boat is manned by over hundred oarsmen. The race is a very popular attraction among the local people and visitors.