Thanjavur, which is popularly known as Tanjore, is situated between the city of Tiruchirapalli and the Coromandel Coast. This ancient citadel of Cholas lies 60 kilometers east of Trichy and nearly 330 kilometers south to the city of Chennai. The city of Thanjavur is named after a demon by the name of Tanjan-an asura. According to the legend the last wish of the demon was that the place should be named after him. Thanjavur has the pride of being the best among the best in Cholamandalam. That was because Tanjore was the capital city of mighty Cholas. The place remained the capital city of the Cholas for 9th century to 13th century A.D barring a brief period during the reign of Rajendra Chola when the capital was briefly shifted to Madurai.

The probable reason why Thanjavur was selected as the capital city was because Thanjavur has got the most fertile of lands in Tamilnadu. This is the reason Thanjavur is still known as the 'Granary of South India'. Thanjavur, the royal city, also has a rich and varied heritage for which it is known across the globe. The city has always been the center of knowledge, art and culture that reached its peak between the 10th and 14th centuries, under the reign of the mighty Cholas.

The Chola dynasty is considered one of the mightier dynasties in the Indian history and probably the mightiest in South India. Besides, Cholas come second only to Pallavas when it comes to patronizing art and craft. During their numerable campaigns in and around the then India, Cholas built many temples. These temples were built actually in order to mark their victories over other dynasties. You can get an idea of magnitude by the fact that there are no less than 70 temples built by Cholas in Thanjavur alone. The most famous among these temples is the mighty and magnificent Brihadeswara Temple.

Apart from its celebrated temples, Tanjore is also famous as the cultural capital of the peninsular India. The city is still proud of its cultural heritage and continues to be the center of classical arts and music in spite of the advent of technology era. Don't forget to catch the performances by the classical musicians, percussionists and the Bharatnatyam dancers during your trip to Thanjavur. Apart from that there is the exquisite Tanjore style of painting that attracts innumerable tourists. These paintings are unique in themselves as they are developed over multiple layers and are usually centered on the Hindu deities.

Thanjavur is a little town placed among the lush rice fields of the Cauvery delta, which is why it is called 'The Rice Bowl of India'. Formerly known as Tanjore, the city is situated some 55 km east of Trichy. From 9th to 13th century, Thanjavur served as the capital of the powerful Chola dynasty which was spread in most of south India. The 8th largest city of Tamil Nadu with a population of around 250,000, the people normally speak only Tamil with only a few citizens who are well versed in English. The splendorous temples are the perfect example of Chola's architecture. The most important temple in Thanjavur is the Brahadeeswarar temple which is now a UNESCO world heritage site built by the great King Rajaraja I. The Thanjavur Palace is another masterpiece worth a visit. There are museums and galleries for artifacts and ancient paintings inside the palace apart from a library named Saraswati Mahal which has an extensive collection of over 40,000 manuscript, palm leaf inscriptions and books of times gone by.

Thanjavur is specially famous for its breathtaking temples, more than 70 of them. The grandest and the most attractive of them is the Brahadeeswarar temple, the tallest temple in South India.. Apart from the temples, the Thanjavur Palace, which houses few of the most magnificent galleries, is also widely visited by tourists. The Royal Museum, The Saraswati Mahal Library and the Art Gsallery have carved a name for themselves. Once in Thanjavur, do not miss a look at the famous Tanjore paintings. Find them anywhere from art galleries to temple ceilings. 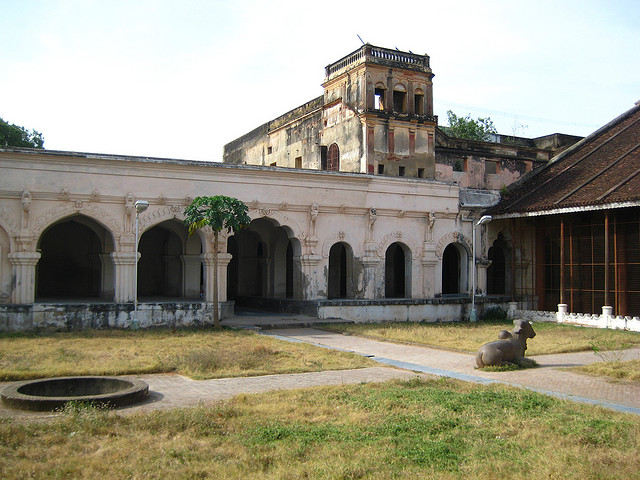 A demon by the name of Tanjan-an asura lends its name to the terrific town of Thanjavur. As per the legend the last wish of the demon was that the place should be named after him, Sri Anandavalli Amman and Sri Neelamegapperumal granted it.

The royal city of the Cholas, Nayaks and the Mahrattas Thanjavur has a rich and varied heritage and is renowned for the same across the globe. The center of knowledge and culture reached its zenith between the 10th and 14th centuries under the reign of the Cholas. Though the magic Thanjavur continues un-faded over the period of time.

By Air: Trichy international airport 58 km away from Thanjavur is the nearest airport. Trichy is connected to Chennai by regular flights. Chennai (345 km) and Banglore (390 km) are other major airports nearby.

By Rail: Trichy Junction is the nearest rail head, which is at a distance of 58 km Thanjavur and is an important railway station in Trivandrum – Chennai route via Madurai.

By Road: Tamil Nadu road transport corporation buses connect Thanjavur with other major cities in the state. Regular bus services are available from Tiruchy and Madurai to Thanjavur and is well linked with other cities by private tourist buses as well.

Tanjore or Thanjavur is known as the cultural capital of peninsular India. It does not come as a surprise then that the city of Tanjore in Tamilnadu is considered a haven for craft lovers. The city is famous for the magnificent and subtle Tanjore paintings that have attracted much demand among the tourists. Apart from the Tanjore paintings, the city is also known for its exquisite handicrafts and handlooms.

The major handicrafts of Tanjore include weaving, painting, jewelry and woodworks among others. These are some of the things that you can shop for in Tanjore. Tanjore has a glorious history of patronizing and producing mesmerizing artifacts. Don't forget to take back some artifacts while shopping in Tanjore.

Silk weaving is a major traditional craft in Tamilnadu and two of its most renowned centers are Kanchipuram and Tanjore. The city of Tanjore specializes in weaving silk saris that have broad border and unique motifs, which are laden with Zari. Don't forget to buy these saris, as they are very popular for weddings and religious occasions.

Nevertheless the thing which is a must buy in Tanjore is a Tanjore Painting. These richly adorned paintings of mostly Hindu deities are quite popular among the tourists. Other minor items that can be shopped include Thalaiyatti Bommai (head-nodding doll), Thanjavur plates and Bronzes.

There are many shops within the city. Several government and private run ones are available in Tanjore that you may explore. As far as Tanjore Paintings are concerned it is always good to visit the craftsmen at work and buy directly from them.

The city of Tanjore in Tamil Nadu is a haven for craft lovers. The city draws much of its fame from the exquisite handicrafts and handlooms that its skilled artisans produce.

Weaving, painting, jewelry, woodworks are some of its renowned handicrafts which make for wonderful shopping in Tanjore. Since long past Tanjore has been a princely state and under the patronage of the royals, tradition of art and craft attained a glorious height in Tanjore. Do remember to take back some artifacts while shopping in Tanjore.

Silk weaving is a major traditional craft in Tanjore. A lot of people are engaged in the profession. They specialize in weaving silk saris with broad border and unique motifs laden all over with Zari work. The saris are huge hit for weddings and religious occasions. Pick up graceful Tanjore silk saris while shopping in Tanjore.

Another must-buy in Tanjore is traditional paintings. Richly adorned paintings of mostly Hindu gods are quite popular with those who want to do shopping in Tanjore.

Check out Thalaiyatti Bommai (literally the head-nodding doll), which serve as great souvenirs of a Tanjore tour. Thanjavur Plates (with sombu, coconut), brass and bronze idols, bowls and vessels are other items for shopping in Thanjavur.

There are many shopping joints within the city. Several government run shops and private ones dot over the townscape, which you may explore for great variety and right price.

Visiting the craftsmen at work and buying directly from them is also a good option for shopping in Tanjore.

With its wealth of temples, historic ruins and picturesque eco-tourism sites, Tanjore is a major tourist attraction in south India. Two / three days stay in hotels in Tanjore make for an ideal tour to the city should constitute of.

There are a good number of hotels in Tanjore. A few are sophisticated luxury hotels that offer you modern amenities with a perfect blend of local tradition.

But if you prefer not to spend much on accommodation, there is a range of choices among rather economy class hotels in Tanjore.

Most of the tourist attractions are close to the hotels in Tanjore and it is easy to visit the sites from the hotels. Some hotels often organize cultural evenings for the guests.
Many hotels have good restaurants too. You may choose to try local cuisines there.

Here are a few select hotels in Tanjore: