Ranchi, also called as Kishunpur earlier, is surrounded by many popular waterfalls and thus is also nicknamed as “City of Waterfalls and Lakes and Forest”. It was once the summer capital of the state of Bihar. The place derived its name from the word “Archi” which is an Oraon/ Kurukh word for farmer’s baton in use while ploughing. It has a hilly topography and its combination with dense tropical forests ensures that it enjoys a comparatively moderate climate compared to the rest of the state. 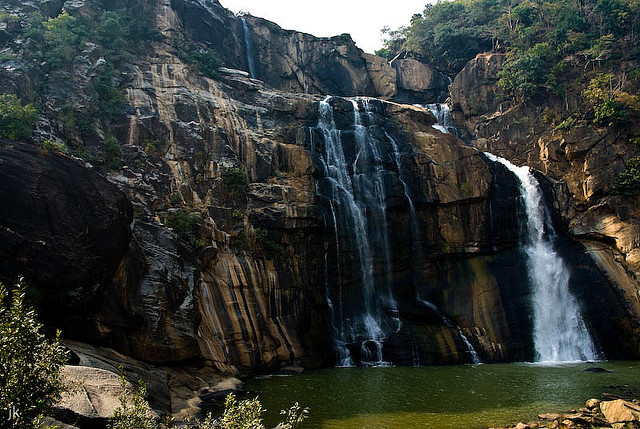 The geographical area currently comprising the district of Ranchi was ruled by the Kshatriya rulers named hanimukut and was in the direct control of the kings of the epic period of the Mahabharata such as Jarasandh, the king of Rajgir. However Lord Krishna was believed to have a loose control over the territory.
Magadha Empire exercised indirect control over the territory, which lasted until the reign of the Ashoka. Kalinga rulers are believed to have ravaged the region during their expeditions to Rajgir and Pataliputra. Armies of Samudra Gupta passed through the region on their expedition to Deccan. After the decline of the Guptas, Phanimukut established the Kingdom of Chhotanagpur. The legendary Phanimukut, which literally means the crown of the cobra, was found by the side of a cobra (Nag in Hindi), and grew to be an industrious king, and founded the Nag Dynasty, which ruled Ranchi district and a larger part of Chota Nagpur Plateau as a sovereign king for almost next 1000 years.
With the expansion of the Mughal Empire, the sovereign status of the Nag Dynasty was technically affected, but they continued to rule and administer independently until the advent of the East India Company. During the period of the British Raj, adivasis and the local population of other ethnic backgrounds of Ranchi and other regions currently comprising the State of Jharkhand continued to oppose the subjugation by the British, and the region witnessed a number of uprisings and revolts.

Air: Ranchi is well linked to important airports in India, including Patna, Delhi and Kolkata. Ranchi airport is located at Hinoo, nearly 7 km away from the city center. Kolkata is the nearest International airport, which is well connected to many cities in India and abroad. Kolkata is about 400 km from Ranchi and tourist pre-paid taxi charges about Rs 7500 from Kolkata to Ranchi.

Rail: Ranchi railhead is well connected to important cities all over the country. Nearest station Hatia is a terminal station and many express trains starts from Haiti and have stop at Ranchi.

Road: Ranchi is well linked with many cities in Jharkand by state road transport corporation buses. The cities Bokaro (110 km), Chaibasa (130 km), Dhanbad (170 km), Patna (340 km) and Jamshedpur (140 km) are all connected to Ranchi. Tourist bus services are available from Kolkata to Ranchi costing about Rs 1200.

Shopping in Ranchi is a pleasant experience, you will find everything of daily use in the markets of the city. Some of the specialties of Ranchi include handicrafts, handlooms, jewelleries and textiles etc. Ranchi also has a number of branded shopping outlets where you can buy clothes, shoes and many other items.

Most of the hotels in Ranchi are along or just off the main road. Sufficient accommodation options are available in Ranchi and you will not face any type of difficulty while staying in these hotels. Some of the noted hotels of Ranchi include Yuvraj Palace, Ranchi Ashok, Hotel Amrit, Hotel Barsa Vihar, Hotel Embassy, Hotel Highland Inn, Kwality Inn, Hotel Arya etc.