Surrounded by tea plantations, Coonoor is the second largest hill station in the Nilgiri mountains characterized by lush green slopes, ravines, valleys and waterfalls. Situated at an altitude of 1839 meters above the sea level, the hill station is located at the head of Hulikal ravine and was once home to the Coon tribe. It is referred to as Coonoor “oor” meaning "hamlet" or "village".

Coonoor became a popular hill station in the 19th century courtesy the British. And while the British have left, the touches of the old grandeur Raj as still evident in the architecture, the landscaping and the names of lanes like Bedford, Elk Hill etc.

Coonoor is one of the hill stations on the toy train line that runs between Mettupalayam and Ooty. It is a part of the Nilgiri Mountain Railway, one of India’s oldest mountain railways, and declared by UNESCO as a World Heritage Site in 2005 (Mountain Railways of India).

Some of the tourist attractions of Coonoor are Dolphin's Nose, lamb's Rock, SIM' Park and Coonoor Tea Festival. This place is a paradise for bird lovers, which can be sighted along the trekking paths and forest trails around Coonoor.

Coonoor has been divided into upper and lower parts, the upper part being residential and lower part being commercial. The surrounding locales also make Coonoor an ideal location for many filmmakers from both India and abroad. The town was the backdrop for the movie “A Passage to India” by David Lean based on the novel of the same name by E.M.Foster.

Coonoor, a beautiful and serene hill station of Tamil Nadu, lies in the Nilgiri Hills. Coonoor derives its name from the Coon hill tribe of the region. Tea bushes, Grassy meadows, profusion of Sunflowers, Marigolds and Rhododendrons characterize Coonoor. Coonoor is basically a small tea estate town where the weather remains pleasant all through the year. Based on its relief, the town is divided into upper and lower Coonoor. Coonoor is one of the three popular hill stations in the Nilgiri Hills, the other two being Ooty and Kotagiri.

Perched at an altitude of 1800 ft, Coonoor is second largest hill station in the Nilgiri Hills, Ooty being the largest one. It is extremely famous for the production of Nilgiri tea. Coonoor extends travelers with the panoramic view of the lush green Nilgiri hills, replete with deep ravines, beautiful valleys and imposing waterfalls. And if these were not enough, the hill station also extends travelers a number of sightseeing places, including Sim's Park, The Pasteur Institute, Dolphin's Nose Viewpoint, Lamb's Rock, Droog, Law's Falls and Ooty.

Coonoor forwards tourists a number of fun activities, which they can indulge in on their tour. Two such activities are nature walking and trekking. Travelers can take a walk through the tea gardens or go for a number of hiking trails around Coonoor. Apart from this, tourists can also enjoy the exhilarating and unique ride on the toy train that connects Coonoor with Mettupalayam and Ooty. The trip provides some breathtaking views of the Nilgiri hills in all its natural glory. Overall, Coonoor is an ideal place to spend a memorable and refreshing vacation in Tamil Nadu.

Coonoor is a town and a municipality in the Nilgiris district in the state of Tamil Nadu, India. It is known for its production of Nilgiri tea. Recently it has experienced a growing networked economy and a significant influx of tourists.
Coonoor is the second largest hill station located in the Nilgiri hills. It is famous for its verdant environs and for a variety of wildflowers and birds. Coonoor provides a perfect setting for activities like trekking and hiking. It is also famous for its tea plantations and festivals. Travelers can also enjoy the ride on the toy train, which connect Coonoor with other hill stations in the Nilgiri Hills.
Coonoor is located in the western part of the state of Tamilnadu, in the southern region of India, at the head of the Hulikal ravine at an altitude of 1850 m above sea level. It is 19 km from Ooty. The weather in Coonoor is pleasant. Summers (April-June) are mild, while winters (November-February) are cool. It experiences southwestern monsoon rains in July-September.
The Coonoor ghat road rapidly supplemented all other routes to the Nilgiris, and Coonoor at the head of this ghat which possessed essential advantages gained its importance. Coonoor Stands on a lower ridge of the plateau at an altitude of 1,858 mts. and has a railway station on the Mettupalayam - Udhagamandalam route. Coonoor is an important trade centre for tea and the Tea Board of India, has a branch office here.
Around and near Coonoor, the travellers and tourists could enjoy the beautiful places of interest like Sim's Park, the Lady Canning's Seat. Lamb's rock. Dolphine's Nose, the Law's Falls, the Droog. 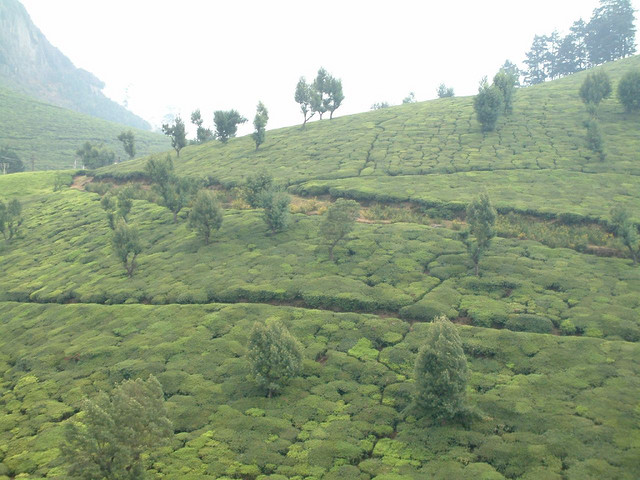 The Nilgiri hills have been the home of the Toda tribe for centuries. Coonoor began to develop as a tourist destination in the 19th century when the British made the region a popular hill station. During summers Coonoor enjoys a mild climate while the burning sun scorches the surrounding plains. The British gentleman, who discovered these hills in 1819, returned the following year to build the first bungalow. Attracted by the temperate climate, the British elite lost no time and established their settlements in the hills. With them came tea plantations. The construction of a railway line accelerated the development of this region.
In those days the rail track from Chennai ended at Mettupalayam. From there the journey to the hills had to be undertaken on pony or bullock cart. In August 1891, the Governor of Chennai laid the foundation of the Nilgiri railway. The concourse was ready within three years, after which a new company undertook the project. In 1897, the line reached Coonoor and was officially inaugurated the following year. By 1908, the line was extended up to Ooty. Today the train is a major attraction and Coonoor attracts a large number of tourists round the year.

Air: The nearest airport from Coonoor is Coimbatore Peelamdeu Airport, which is at a distance of 70 km. Coimbatore is connected by air to airports in South India, especially to Chennai and Bangalore. Bangalore airport, 310 km away from Coonoor, is the nearest international airport which is well connected to many gulf countries and other foreign cities. It takes about 10 hr journeys by Taxi from Bangalore to Coonoor and costs around Rs 5000.

Rail: The Nilgiri Mountain Railway service between Ooty and Mettupalayam is available with stop at Coonoor. Major broad gauge railway station nearby is Coimbatore junction. This station is connected to all major cities in the country.

Road: Coonoor is well connected by bus services. Regular state owned bus services are available from Coimbatore, Ooty and other cities in Tamilnadu. Ooty is only 17 km from Coonoor, with a bus fare of about Rs 30. Many private tourist buses are also running to Coonoor from Ooty, Coimbatore and Mettupalyam.

It may not be one of the most well known shopping locations, but it should be. Exceptional petit point embroidery can be found here. Coonoor is also famous for its tea, hand made antiques, Indian handlooms, and shawls. Irish and Belgian table sets and shadow-worked bed sheets are also readily found in the Coonoor shops. With such fine cotton clothes available here, many like to stock up on household clothing items at such stores as the Fine Things boutique. The stores in Coonoor are also known for the outstanding fruit that can be obtained there. Such items as fruit nectar, mulberry fruit, passion fruit, and ambrosia can all be found in Coonoor.

There is no dearth of accommodation in Coonoor. Accommodation options range from luxury to budget hotels catering to those who travel to this beautiful hill resort.

Coonoor Tea Festival
The Coonoor Tea Festival is an event held annually in January and attracts tea connoisseurs and buyers from all parts of the world given the large number of tea plantations around here that produce quality tea.

Bird Watching
Coonoor is a bird watchers paradise. One just has to look and listen to their melodious chirps to believe it. Some of the varieties that are seen in Coonoor include Parakeets, Skylarks, Nilgiri Verditer, Cormorants, Pipits, Thrushes, Vultures, Eagles, Owls, Cuckoos, and Robins.

One of the best ways to bird watch is to take one of the many trekking routes around Coonoor.

Golfing
For those who have a knack for playing golf, Coonoor can be an ideal haven to retreat to during vacations. One of the most popular golf courses in India, the Wellington Golf Course Coonoor is spread over a large area and is surrounded in the midst of exotic landscape. The serenity of the place coupled with its picturesque beauty adds to the charm and charisma of the place. Due to this, the Wellington Golf Course has become hugely popular among film crews, who film in this area.

Nature Walks
If you want to get a taste of the unexplored beauty of Coonoor, nature walk would be the best bet. Enveloped by lush greeneries on all sides, amidst wild flora and fauna, the place extends tourists just the right opportunity to have a walk in the blissful surrounding. All you need to do is fit in a comfortable pair of shoes and step outside to explore the beautiful and picturesque hill station of Coonoor.

Trekking
Trekking enthusiasts can quench their thirst for thrill and adventure with their visit to Coonoor. Beyond the Wellington Golf Course is the Hidden Valley, an ideal place to indulge in trekking. It is a great trek route and also one of the best ways to explore the bounty of nature. The picturesque beauty of the place would add to the glory of trekking. Some of the trekking options are:
One of the popular trekking trails leads to Lamb’s Rock, which is about 9 km from Coonoor. Overlooking the Coimbatore plains, it provides a spectacular view of the tea and coffee plantations.
Another option would be to trek from Lady Canning’s Seat to Dolphin’s Seat, which is located 12 km from Coonoor.
The Law’s Fall is another trekking option, which is located 5 km from Coonoor.
You can then trek from the falls to Droog that is located at a distance of 13 km from Coonoor.