Auroville is an "experimental" township near Puducherry, was founded by Sri Aurobindo's mother on February 28, 1968. It is meant to be "a universal town where men and women of all countries are able to live in peace and progressive harmony above all creeds, all politics and all nationalities. 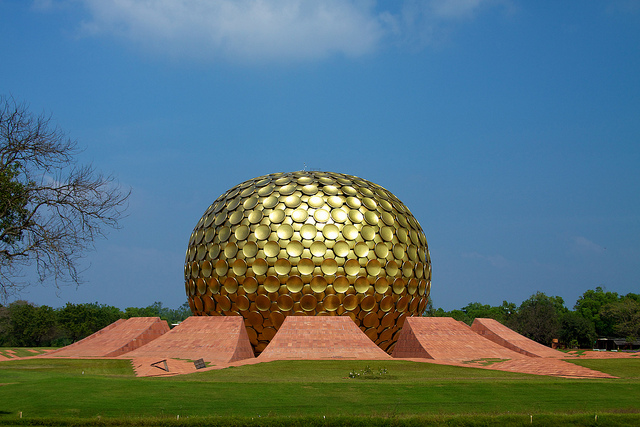 Auroville was founded as a project of Sri Aurobindo Society on Wednesday 28 February 1968 by Mirra Alfassa, "The Mother". She was an equal spiritual collaborator of Sri Aurobindo, who believed that "man is a transitional being". The Mother expected that this experimental "universal township" would contribute significantly in the "progress of humanity towards its splendid future by bringing together people of goodwill and aspiration for a better world." The Mother also believed that such a universal township will contribute decisively to the Indian renaissance (Ref. Mother's Agenda, Vol. 9, dt.3.02.68). The Government of India endorsed the township, and in 1966, UNESCO also endorsed it inviting the member-states to participate in the development of Auroville. UNESCO re-endorsed Auroville four times more in the course of the last 40 years[citation needed].

By Road: There are buses plying regularly from Chennai, Bangalore, Ooty, Madurai, Kanchipuram and Mahabalipuram.

The town has a number of settlements to cater to the needs of travellers and guests. You can find accommodation varying from Rs 150 to Rs 1,000 (per head/ night).

District
Viluppuram
STD Code
041386
Best time to visit
Throughout the year
Famous For
An 'experimental' township, City of Dawn
Upcoming