Dwarka, also known as the kingdom of Lord Krishna, is located on the western most tip of Saurastra and is one of four most holy pilgrimage sites (Chardham) of Hindu faith and is associated with Lord Krishna’s life. The place is close to the edge of the Kutch peninsula near the shores of the Arabian sea, the city of Dwarka is built on the right bank of the Gamut creek. The city is regarded as one of the seven oldest cities in India.

Apart from the tranquil ambiance of the holy shrines, Dwarka offers some of the appealing beaches, where the glittering waters and the warm weather tempts the beholder with its inherent charm. 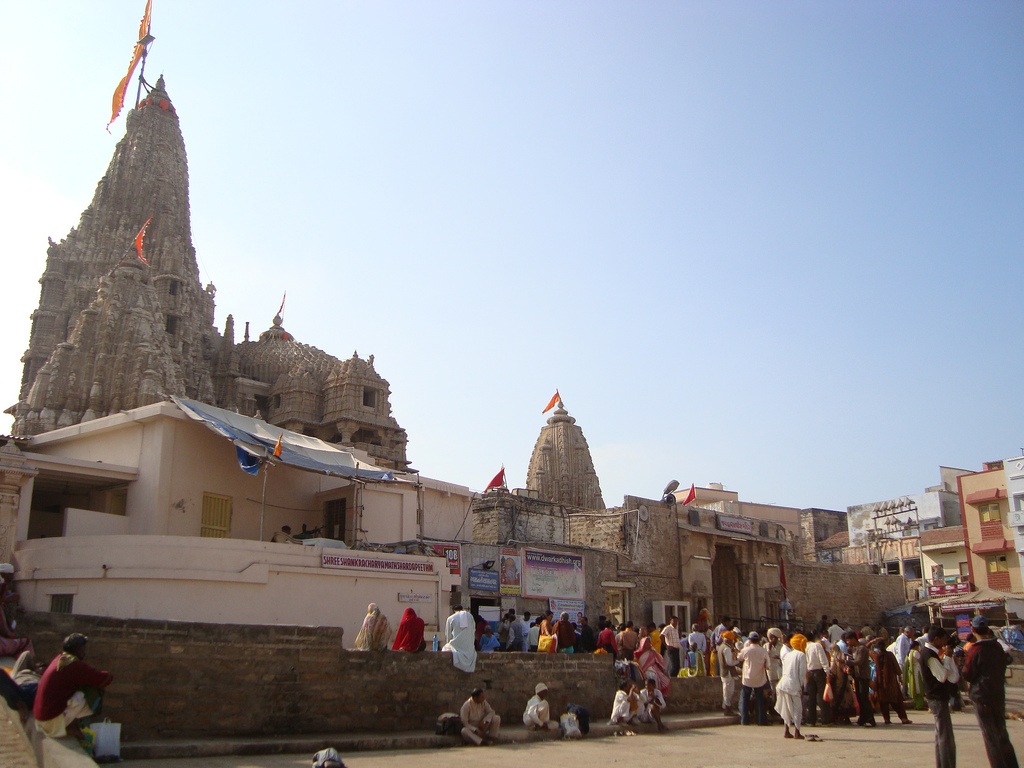 Dwarka called as Dwarawati or Kushasthali in Puranic times, is deeply associated with Lord Krishna, who developed his kingdom here, after he left Mathura with his followers. During Lord Krishna's time, Dwarka was called as Swarnadwarka. There are many legends connected with Dwarka. It is said that original Dwarka, that is believed to be built by Vishwakarma, where Lord Krishna spent 100 years, was destructed by the sea when the Lord Krishna finally abandoned his body and the city in due course was submerged by the sea, devastating the entire Yadava clan.

Present Dwarka, the gateway to western India, is the 7th city built with stone and brick on the edge of the Kutchh peninsula, facing the Arabian Sea. Dwarka extended up to Bet Dwaraka (Sankhodhara) in the north, Okhamadhi in the south and Pindara in the East. The earlier cities were buried under the sea and have been revealed by marine archaeological excavations.

Along with Joshimath (Uttarakhand), Sringeri (Karnataka), and Puri (Orissa), Dwarka is one of the four Mathas or Sharada peethas (centres for the practice of an ascetic form of Hinduism) established by the great Indian Saint and Philosopher Adi Shankaracharya in the 8th century AD.

By Air: The closest domestic airport to Dwarka is located at Jamnagar, which is about 137 km away.

Shopping is an inevitable pastime in this historic city. A variety of shops that supplies excellent Gujarati artifacts on a comparatively good price would be the sweet remainders of your trip.

Beautiful Patola sarees are a must among the buys while Shopping in Dwarka. Exuding the essence of rich Gujarati folk culture, the Bandhni form of embroidery is a treat to the eye. Bandhni works in sarees, Ghagra cholis, dress materials, handicraft items, showpieces and accessories in a rich demonstration of life and liveliness. The mirror works coupled with a dazzle of sequins shells and beads in fabrics, footwear and home accessories like bed covers and home linen, add a new dimensions to the shoppers' list. Ornaments or any showpieces made out of silver is another interesting buy in Dwarka.

The narrow street leading to the temples is lined on both the sides by vendors selling seashells, local crafts, photos of deities, cassettes, coconuts and other refreshments. The pilgrims engage in bargains after paying obeisance to the deities in an atmosphere of tranquility on this windy island.

Hotels in Dwarka can be classified into lower, middle and upper class budget hotels. They provide you with comfortable rooms and a fine dining experience. Moreover the other facilities and customer centric behavior of the hotel staff goes a long way in making your stay memorable and worthwhile.

Most of these hotels are located in close proximity to the airport and near the tourist spots so that it becomes easily accessible to the tourists. Hotels in Dwarka offers you good dining facilities too. Most of the hotels here has an onsite restaurant and the very few that doesn’t have an in house restaurant have nearby eating access and restaurants. The restaurant provides you both vegetarian and non vegetarian items. However special vegetarian foods are prepared for the many pilgrims who throng this holy site.

There are many dharamshalas and guest houses in the outskirts of the hotel which provides you with clean rooms and wholesome dining facilities at a reasonable rate.