Anandpur Sahib, known as "the holy City of Bliss", is a holy and sacred city for the Sikhs. It is the birthplace of the Khalsa and is one of the 4 seats of authority of the Sikh religion and has about 40 Gurudwaras within the city. It is located on the lower spurs of the Himalayas surrounded by picturesque natural scenery, with the river Sutlej forming a shimmering and shiny blue border on the south west barely four miles away. 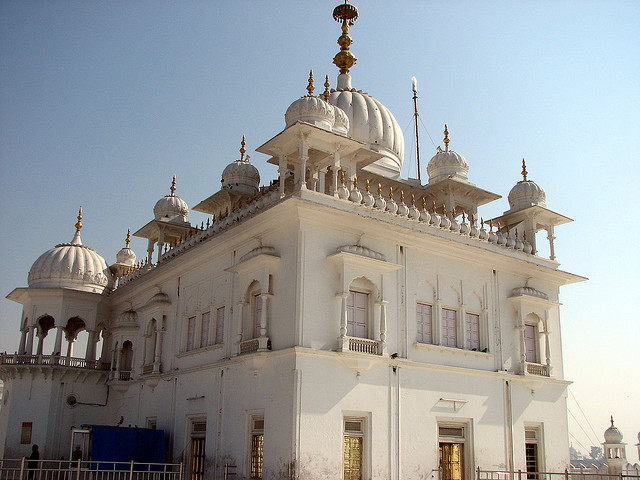 Anandpur Sahib was founded in the year 1665 by the ninth Sikh Guru, Guru Tegh Bahadur, near the ruins of an ancient place, Makhowal. On May 13, 1665, Guru Tegh Bahadur went to Bilaspur to attend the mourning for Raja Dip Chand of Bilaspur State. The Dowager Rani Champa of Bilaspur offered to give the Guru a piece of land in her state. The Guru bought the site on payment of five hundred rupees. The land consisted of the villages of Lodhipur, Mianpur and Sahota. Here on the mound of Makhowal, Guru Tegh Bahadur raised a new habitation. The ground was broken on 19 June 1665, by Baba Gurditta Randhawa. The new village was named Chakk Nanaki after the Guru's mother, Nanaki. The place later came to be known as Anandpur Sahib.

Road: There are ample buses plying at regular intervals from Delhi and Chandigarh to Anandpur Sahib. All buses going to Una in Himachal Pradesh pass through Anandpur Sahib.

There are very good Sarais (Inns) available to house visiting pilgrims. Hotel accommodation at Anandpur Sahib is not ready so far. However, Kissan Haveli is a good place for overnight stay.

Baisakhi 1999 at Anandpur Sahib had been significant as it marked the completion of 300 years of the Birth of the Khalsa. It was on Baisakhi day in 1699 that Sri Guru Gobind Singh Ji baptised the 'Panj Pyaras' at Anaandpur Sahib at the place where Takht Sri Kesgarh Sahib stands.