Vikramshila, site of an ancient University, lies at a distance of approximately 40 km from the city of Bhagalpur. The town is famous for housing ancient Vikramshila University, built under the guidance of Dharmapala (a Pala king of 8th century AD), situated on top of the hills along the banks of river Ganges. It became one of the most popular Buddhist destinations in India.

At present, Vikramshila stands as a site for the remains of this University. 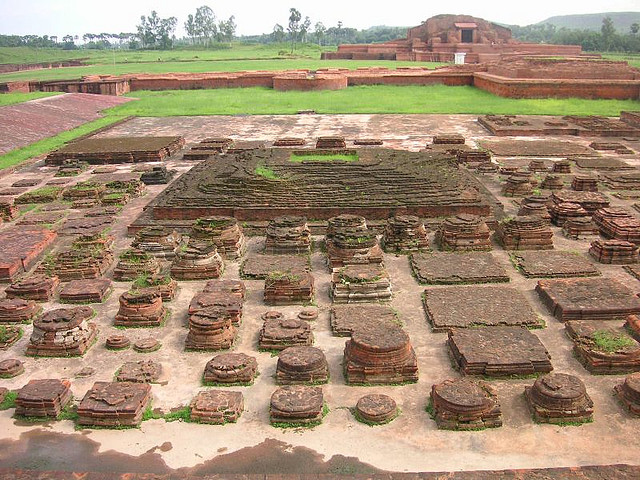 Notwithstanding the current neglected condition, the remains are an exquisite depiction of the glory of Bihar in medieval times. This University, which excelled in the field of education and science, studies in Tantra & teachings in Buddhism., was established by King Dharampal of Bengal (783 to 820 AD) during the fag end of the eighth century. At the time, the charm of the Nalanda University, another ancient Buddhist educational institution, was waning. Vikaramshila University's highest adminstrative post was that of the President and one such President Dipankar Acharya Ateesh, was famous the world over for his knowledge in the field of Buddhist Philosophy. In order to be admitted, the students had to satisfactorily answer all queries of the teacher present at all the six main gates. These teachers were called Dwar-Pandits.

Till 39 years back, historians were kept guessing about the old University, lying beneath the soil. While Cunningham thought that it could be found anywhere around Silao near Patna, Dr. S. C. Vidyabhushan imagined its existance somewhere near Sultanganj - about 22 km west from Bhagalpur city. Francis Buchanan, in the accounts of his tour of Bhagalpur around 1810 and 1811, had referred to the presence of a few small mounds around Pather-Ghatta which he assumed were the remains of a few fortresses. C.F.A.W. Oldham, while editing Buchanan's diary, for the first time suggested that these mounds might belong to the Vikaramshila University. Excavation started at the site in 1961 which continued till 1980, under the supervision of Union Govt. and the History Department of the Patna University. The digging took place over 125 acres and in 1972 the work was handed over to the Archeological Survey of India (ASI). In 1981, the excavation was given up due to financial crunch.

After flourishing for years, it was plundered by invaders around 1200 AD.

By Rail: Bhagalpur is the closest railway station to reach Vikramshila by rail.

By Road: 281 Kms from Gaya, 291 Kms from Patna, 391 Kms from Motihari, 308 Kms from Muzaffarpur, 245 Kms from Biharsharif, 310 Kms from Bodhgaya. Vehicles are available on hire in Bhagalpur to take you to Vikramshila.