Srikalahasti, located on the banks of the river Swarnamukhi (tributary to Pennar), is one of the ancient and most important Kshetras (spiritual abodes) of Lord Shiva. It got its name from the three words 'Sri' meaning a spider, 'Kala' meaning a serpent, and Hasti meaning an elephant, as these three creatures are believed to have worshipped Lord Shiva at this place and attained salvation. The place is also known for its Kalamkari art, an art form which is used for painting on cotton textiles such as saris. 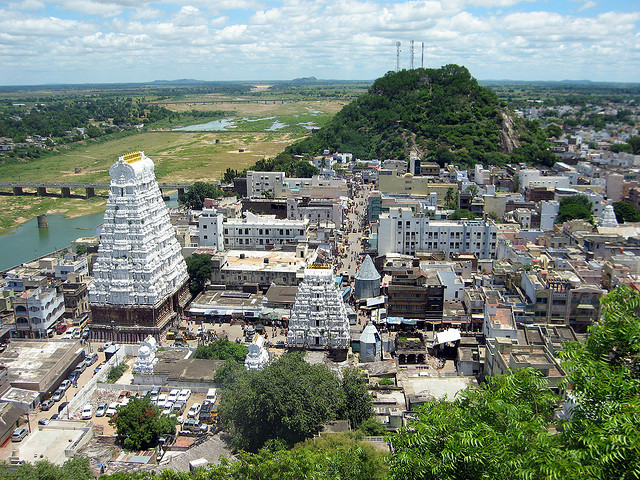 Legend has it that Lord Shiva, while disguised as Vayu ("Air") observed that a Spider ("Sri"), a Cobra ("Kala") and an Elephant ("Hasti") each worshipped Him very devotedly at this location. Lord Shiva rewarded them for their penance and relieved them from a curse they had suffered and helped them attain salvation. As a result of this legend, the place came to be known as Srikalahasti.

Srikalahasi is also one of the "panchabhoota sthalam" which represent the five basic elements of life. The town is said to represent "Air" or "Vayu Sthalam" based on the earlier legend related to Lord Shiva. The remain Pancha Bootha Sthalams are at Tiruvannamalai (Thejo sthalam - Fire), Kanchipuram (Prithvi sthalam - Earth), Tiruvanaikaval (Appu sthalam - Water), and Chidambaram (Akasa sthalam - Space).

Nearest airport is located at Tirupathi at a distance of 60 km from Srikalahasti. Tirupathi is connected to Madurai, Chennai, Hyderabad and Bangalore. Taxi services are available from Tirupathi to Kalahasti and the fare is about Rs. 750. Chennai International airport is the major closest airport to Srikalahasti.

Srikalahasti is on Tirupati-Vijayawada broad gauge rail route and all express trains have stop at Srikalahast. It is well connected to all major cities in South India directly.

Famed for the ritualistic painting style by name Srikalamkari, Kalahasti offers you one of the most venerated styles of artistic expressions. What makes this painting so special is the fact that it is done with natural dyes, which are not only harmless but also exquisitely beautiful. You will get these paintings from the shops at BP Agraharams and Sriram Nagar Colony.

Since the temple of lord Shiva is the major attraction here, all artifacts that we get from here show a religious inclination. Although the Holy Scriptures inspires these objects, they would be a valuable treasure and hence it is advisable to have some of them as your shopping itineraries.