Ranthambore is known for its tigers and is one of the best places in India to see these majestic predators in the jungle, bounded to the north by the Banas River and to the south by the Chambal River. It was the erstwhile hunting grounds of the Maharaja of Jaipur until 1955 when it was declared as a game sanctuary. It is also the site for one of the largest banyan trees in India. 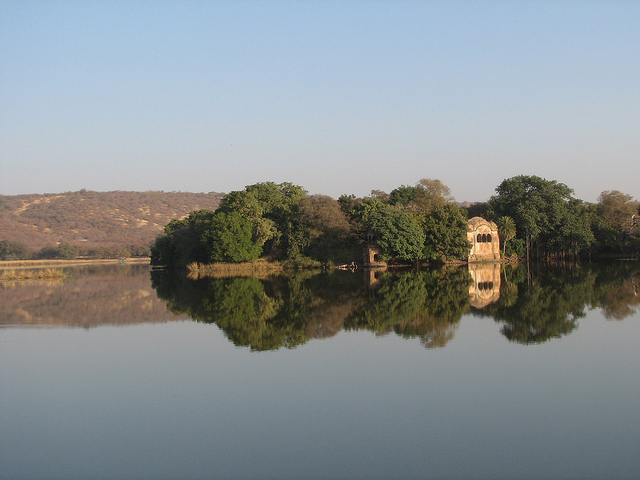 The Ranthambore National Park was the hunting ground of the Maharajas of Jaipur. The region of Ranthambore is rich in history. This region was under the control of the Rajput King Hamir but was defeated by Ala-ud-din Khilji's army in AD 1301. The history of Ranthambore reached the pinnacle of its glory when Emperor Akbar captured it in 1569 AD. He also took over the control of the fort from the Rajputs. The painters and artists have painted this event in miniature paintings of the Akbarnama. The fort was transferred to the Kachwaha rulers of Jaipur later and remained under their control till 1949 when Jaipur was made the part of Rajasthan.

Air: Sanganer Airport located at Jaipur is nearly 180 km from the Ranthambhore city and taxi fare is about Rs 3500 from Airport to the city. Jaipur airport is connected to metro cities Mumbai and Delhi. Foreign travelers can take connection flights from Delhi international airport, which is nearly 425 km away from Ranthambhore. Taxi charges about Rs 7500 from Delhi to Ranthambhore.

Road: Ranthambhore is connected by regular bus services to other cities in and around. Many public transport buses connecting Ranthamabhore with Jaipur, Pushkar and Ajmer. Private bus services are available from Ranthambhore to Agra (250 km) and Delhi (400 km).

One can choose from a variety of accommodation options in Ranthambore. There are a number of budget hotels and resorts that provide good services. From deluxe rooms to standard suites, you can certainly be assured of a comfortable stay. Guests can also enjoy scrumptious Indian and Rajasthani cuisines at the Ranthambore budget hotels and the various resorts.

Bird Watching
Ranthambore Wildlife Sanctuary is considered to be a bird watchers paradise. This is because it approximately 272 species of birds, both resident and migratory, can be seen in the park. Some of the most popular species include graylag goose, woodpeckers, Indian gray hornbills, common kingfishers, bee eaters, cuckoos, parakeets, Asian palm swift, owl, nightjars, pigeon, dove, crakes, snipes, sandpipers, gulls, etc. Malik Talao, the Ranthambore Fort, Rajbagh Talao, Padam Talao and the Jhalra area are the areas in Ranthambore that are best suited for bird watching.

Hot Air Ballooning
Ranthambore is one of the places in Rajasthan where hot air ballooning takes place. As you fly miles above the wildlife sanctuary, the lush greenery scenery surely takes you by surprise. The balloon ride also provides you with an opportunity to take some of the best photographs of the wild animals as well as birds, from above, suspended in mid air. Majority of the hot air balloon flights in Ranthambore take off from the helipad on the arterial road. However, you can also take a flight from Ranthambore Road, Madhopur, or any other destination.

Jungle Safari
One of the best ways to explore Ranthambore is through a jungle safari, which takes you as close to the wildlife as possible. It is undertaken on open-roofed canters (small trucks), which can seat 20 people at a time. These canters move on a network of four tracks that crisscross the park. Apart from that, you can also go on a jeep safari. At any given time, a maximum of three open jeeps are allowed on each trail.

Exploring Heritage
Apart from being home to a large number of wild animals as well as birds, Ranthambore National Park is also known for housing a historical monument i.e. Ranthambore Fort. Situated atop a hill, the fort is one of the best places to have a view of the entire park. It presents an architectural and historical wonder and is best visited on foot. Another attraction of the park is Raj Bagh Ruins, located between Padam Talab (lake) and Raj Bagh Talab. It includes ancient stone structures, like arches, palace outhouses, domes, and steps, all in ruins now.