Rajgir, just 15 kms from Nalanda, was the first capital of the kingdom of Magadha, a state that would eventually evolve into the Mauryan Empire. Its date of origin is unknown, although ceramics dating to about 1000 BC have been found in the city.

Rajgir, a small hill town, is covered with lush green forest which adds to the beauty of the place. It is located in a verdant valley and is surrounded by seven rocky hills: Vaibhara, Ratna, Saila, Sona, Udaya, Chhatha, and Vipula.

The place is also associated with Buddhism and Jainism as Lord Buddha and Lord Mahavira spent some of their time here meditating and preaching. 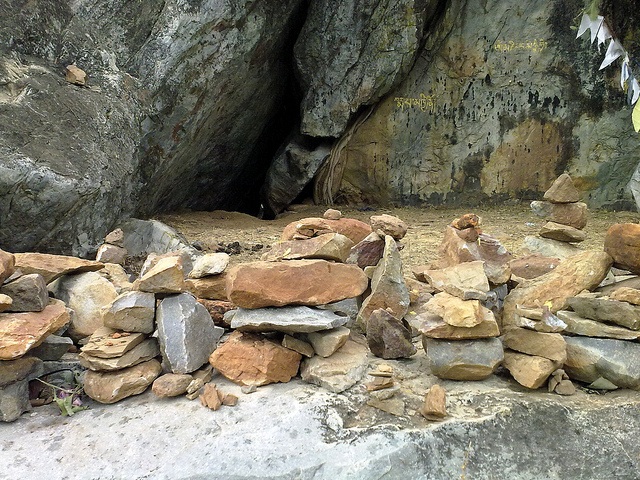 Rajgir, "House of the King", is an important religious place for Hindus, Buddhists and Jains. This ancient town has reference in Mahabharata, Buddhist and Jain texts.

Rajgir was the ancient capital city of the Magadha kings until the 5th century BC. Jarasanadh who hailed from this place had defeated Krishna 18 times. Mahabharata reco unts a wrestling match between Bhima and Jarasandh, the then king of Rajgir. Jarasandh was invincible as his body could rejoin any dismembered limbs. According to the legend, Bhim split Jarasandh into two and threw the two halves facing opposite to each other so that they could not join.

It was at this place the Gautam Buddha spent several months meditating, and preaching at Griddhkuta,(Hill of the Vultures'). He also delivered some of his famous sermons and converted King Bimbisara of Magadha and countless others to his religion. Rajgir is also famous for its association with Maurya Kings Bimbsara and Ajatashatru. Ajatshatru kept his father Bimbsara in captivity here. On one of the hills is the cave of Saptparni where the first Buddhist Council was held under the leadership of Bhikshu Kashyap. The Saptparni cave is also the source of the Rajgir Hot Water Springs that have curative properties and are sacred to the Hindus, Buddhists and Jains. Today an aerial ropeway provides the link with a hilltop stupa "Peace Pagoda" built by the Japanese.

Rajgir was the capital of the Magadh Mahajanpad before Patliputra was formed. In those days it was called Rajgrih. Rajgir, or Rajgrih, which means "Tthe Home of Royalty" has been associated with Lord Buddha and Buddhism.

Buddha, apart from spending several years in Rajgir, also delivered sermons here. The Jivekarmavan monastery was the favorite residence for Buddha. The teachings of Buddha were penned down at Rajgir and it was also the venue for the first Buddhist Council.

The nearest airport is Patna (107km).

Rajgir has its own railway station but for taking trains to various parts of the country one should take the trains from Gaya which is 78 km. The nearest railway station on Delhi-Howrah (Calcutta) main line is Bakhtiyarpur 54Kms. Though the loop line connects nalanda

Rajgir is connected by Road to Patna, Gaya, Delhi and Calcutta

Rajgir is not the perfect place to shop for it is more of a pilgrimage destination. Visitors can buy the local handicrafts of the place (sculptors and bowls) and also some religious items like beads, incense sticks, metal statues etc near the many tourists places.

If you were still keen on shopping in Rajgir to take back some souvenirs, Travel.mapsofindia suggests you to go for shopping in Patna. Patna is the nearest important city from Rajgir. You would find here the wide variety of handicrafts that are the specialty of the region.

Madhubani paintings of course are the most popular items for shopping in Patna. You may also pick up several items ranging from hand-painted wall hangings to miniatures in paper and leaves and appliqué work on fabric while shopping in Patna.

Here are a few hotels in Rajgir:

Rajgir Dance Festival : Department of Tourism and Development Bihar organizes the dance festival from October 24 to 26. During the festival the artists from the state present the classical and folk dances.

Makar Sankranti Mela : A specific festival of Rajgir, the Makar Sankranti Mela is held on the last of the lunar calendar month 'Paus' (mid January). During the Mela the devotees offer flowers to the deities of the temples at the hot springs and take a holy dip.