Nabadwip,also referred to as the 'Oxford of Bengal', was earlier located on the eastern bank of Bhagirathi, along with the rest of the Nadia district. However, as Bhagirathi River changed its course, the city shifted to its western bank. It comprises of 9 islands: Antardwip (Sri Mayapur), Simantadwip, Rudradwip, Madhyadwip, Godrumdwip, Ritudwip, Jahnudwip, Modadrumdwip, and Koladwip. is visited by thousands of pilgrims belonging to Gaudiya Vaishnavism every year, on the occasion of Sri Navadvipa-mandala Parikrama. It is a famous temple town with about 185 temples in and around.

Navadwipa-Navadvipa is located in Naida District in the state of West Bengal. The destination is located at a confluence of two rivers, namely Bhagirathi and Jalangi Rivers. Earlier, the place along with the rest of the Nadia District was situated on the eastern bank of River Bhagirathi. However, with the change in the course of the river, the destination is now located on the western bank of the river.

According to the history, it is said that Navadwipa-Navadvipa from around 1179 to 1202 AD, served as the capital city of Lakshmana Sena, the famous ruler of the Hindu Sena Dynasty. However, in 1202 AD, the destination was invaded and captured by Bakhtiyar Khilji. His victory over this destination paved the way for the rule of Muslims in the state of West Bengal.

The destination for around five centuries also served as the prominent centre of education in the country. Owing to this reason, the city was also referred as the 'Oxford of Bengal'. At present, the destination is famous as the birthplace of Chaitanya Mahaprabhu.

Besides, the destination is also known for its numerous temples and festivals celebrated. On the occasion of Sri Navadvipa-mandala Parikrama, this place is visited by large number of devotees, especially belonging to Gaudiya Vaishnavism. In addition, Rash Festival is another important festival, which is celebrated in the month of November in this destination.

With numerous new and old temples, the destination is visited by devotees belonging to different sects like Shaktas, Vaishnavs and Shivaites. One of the most prominent attractions of the region is Sonargouranga temple, which is dedicated to Sri Chaitanya Mahaprabhu. In addition, tourists can also visit some of the other famous places such as Sri Chaitanya Saraswat Math and Sri Devananda Gaudiya Math, located within the destination.

To reach Navadwipa, flights, buses and trains are all available. There is no airport located within the destination and hence is served by Netaji Subhash Chandra Bose International Airport in Kolkata, which is the nearest airport. This airport is located at a distance of around 121 km from Navadwipa-Navadvipa.

Trains are also available for travellers, which are served by the Nabadwip Dham Railway Station, located at a distance of 2.2 km from the destination. In addition to flights and trains, buses are also available, which can be boarded from the places like Kolkata and Howrah.

The best time to explore the destination stretches from the months of October to March. 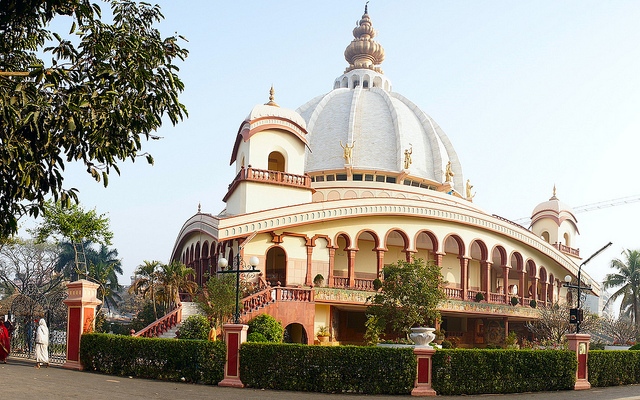 Nabadwip was the capital of Ballal Sen and later Lakshman Sen, the famous rulers of the Sena Empire, who ruled from 1159 to 1206.[2] In 1202, Nabadwip was captured by Bakhtiyar Khilji. This victory paved the way for Muslim rule in Bengal.[3] Nabadwip and Nadia were great centres of learning and intellectual prowess. For five centuries, it was referred to as “Oxford of Bengal”.[4] Chaitanyadeb (1486–1533) who was born at prachin mayapur (which is now under the river bhagarati),?? spent many years at Nabadwip.[5]
The Holy Birth Place of Lord Caitanya Mahaprabhu is known as "Gour Gangar Desh" as well as " Oxford of Bengal". We are proud for Srichaitanyadeb, Krishnanda Agambagish, Basudeb Sarbobhouma etc. The religious atmosphere of Nabadwip is a combination of Baishnaba, Shakta, Buddha, Saiba due to the aforesaid leaders, Pal Monarchy, Sen Monarchy etc. The main festival of Nabadwip is "RASH UTSAV". It is also known as "Pat Purnima" or "Rash Kali Puja" or "Shakta Rash". The varieties of Baishnaba, Shakta, Saiba Pratima (Idols) attracts every one. The Rash Utsav is like national festival of the inhabitants of Nabadwip.

Air: The nearest airport to Navadvipa is Kolkata International airport and is placed at a distance of about 130 km from Navadvipa. Pre-paid taxi services are available from airport to Navadvipa city. Taxi fare is about Rs 1500 to 2000. Kolkata is well connected to all major airports in India and also major cities abroad.

Rail: Navadvipa terminal is well connected to other major railheads through Howrah Junction. The railway station is located well within the city limits. Many local and express trains touch Navadvipa railway station. One can reach Navadvipa from Howrah in Janasatabdi express having a running time of about 2 hours.