Kukke Subramanya is a Hindu temple located in the village of Subramanya in the Sullia taluk of Dakshina Kannada District near Mangalore, Karnataka, India. The temple is one of the pristine pilgrimage locations in India. Here Lord Subrahmanya is worshipped as the lord of all serpents. The epics relate that the divine serpent Vasuki and other serpents found refuge under Lord Subrahmanya when threatened by Garuda.

Kukke Subrahmanya, dedicated to Lord Subrahmanya, also called Murugan, is a Hindu temple situated in Subramanya, in the Western Ghats of Karnataka, India. The God Subrahmanya is worshipped for his divine power as a snake as the epics relate that the divine serpent Vasuki and other snakes found safety under God Subrahmanya. It is famous for Sarpa Samsakara or Sarpa Dosha.

The temple is about 105 km from Mangalore. The temple lies on the banks of the river Kumaradhara. One has to take a holy dip in the waters of Kumaradhara and enter the courtyard of the temple from behind to view the idol. There is silver covered Garuda pillar positioned to shield the devotees from the poisonous flames from the breath of the snake God Vasuki.

Mythology:
Lord Subramanya is worshiped in the form of a Cobra in the temple of Kukke Subramanya.According to Hindu Mythology Lord Kumaraswamy killed the demon rulers Taraka, Shoorapadmasura and others in a war; and the Lord washed his Shakti Ayudha (Axe in the shape of a bayonet) in this river. Hence forth the name Kumaradhara was given to the river.

After the battle Lord Subrahmanya came to the top of Kumara Parvatha along with his brothers Lord Ganesha, Veerabahu and other aides. Lord Indra along with other Gods received him and prayed the Lord to be kind enough to marry his daughter Devasena. Thus Indra’s daughter Devasena married Kumaraswamy on the banks of Kumaradhara on 'Margashira Shudda Shashti'.

Lord Kumaraswamy also gave darshan to Vasuki the head of nagas, who was making a penance requesting him to be with the Lord permanently. Granting Vasuki’s wish the Lord has made his spiritual presence in this shrine along with his wife Devasena and Vasuki.

Every year a famous car festival is being held here on 'Margashira Shuddha Shashti' with special poojas to the Lord. 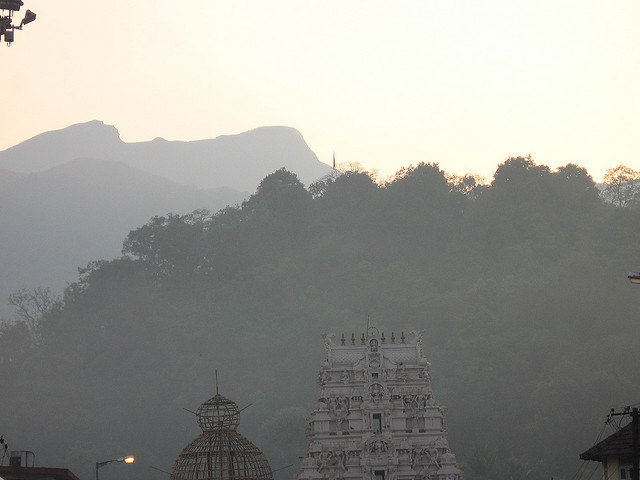 There are many interesting stories on how the village got its name. The village used to be earlier known as Kukke Pattana. According to one legend, the mythical Vasuki and other snakes took refuge from Garuda under Lord Subrahmanya in the village caves. Vasuki installed the linga of Lord Siva in a cave or kukke and hence it came to be known as Kukke Linga and the place as Kukkepura.
In the local language “kukke” means “basket” and the worship of linga in a basket led to the place acquiring its name. Lord Kumara (another name for Lord Subrahmanya) came to the river after killing the demon ruler Taraka and washed his weapon, the Shakti Ayudha, in this river. From then onwards, the river came to be known as Kumaradhara.

Rail: Nearest rail head is Subramanya Road railway station, which is nearly 7 km from Kukke in the Mangalore - Bangalore rail route. Auto rickshaws cost about Rs 50 and Taxi costs about Rs 150 from railway station to the Kukke temple.

Trekking: The adventurous tourists can trek in the terrains of Kumara Parvata and nearby forests. There are no roads leading to the mountains. To reach Kumara Parvata, one has to climb Sesha Parvatha.

There are some trekking trails in Kumara Parvata. Trek to the top of Kumara Parvatha which is 4000 ft above sea level and the trek will take you through dense green forest as well as some rocky terrain.

The railway tracks from Sakleshpur to Kukke Subrahmanya extend makes for a grand trek with its several tunnels and bridges, thick evergreen forests, streams and rivers. These treks are very challenging and the reminiscences will remain long after one has returned to the high-speed life of the large cities.