Konark is a small town, famous for the 13 th century Sun temple built in from oxidizing and weathered ferruginous sandstone by King Narasimhadeva I of the Eastern Ganga Dynasty. The Konark Sun temple is a World Heritage Site that takes the form of a chariot of Surya, the Sun God, and is heavily decorated with stone carvings. 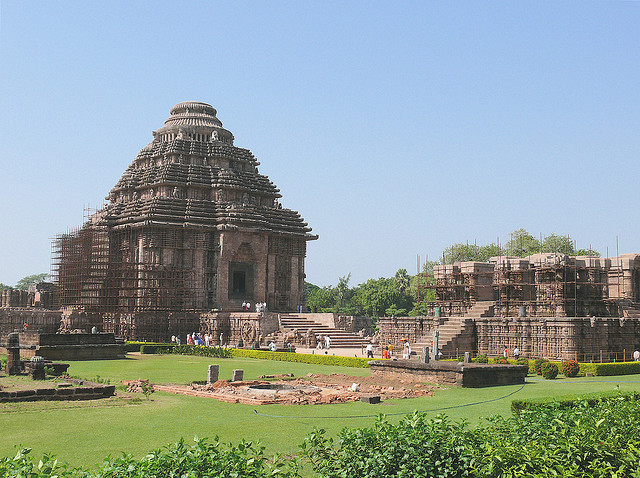 Konark derives its name from Konarka, the presiding deity of the Sun Temple. Konarka is actually a combination of two words, Kona (corner) and Arka (sun), which, when combined, means the sun of the corner. Konark was one of the earliest centres of Sun worshipping in India. The place finds mention in the Puranas as Mundira or Mundirasvamin, a name that was subsequently replaced by Konaditya or Konarka. Apart from the Puranas, other religious texts also point towards the existence of a sun temple at Konark long before the present temple.

On delving deep into the historical background of Konark, it is revealed that Konark owes its name to Konarka, the presiding deity of the Sun Temple. It would interest one to know that Konark is actually an amalgamation of two words, "Kona", meaning corner and "Arka" meaning Sun. The two when taken together, implies the sun of the corner. On leafing through the pages of Konark history, you would come to know that Konark was one of the earliest centers that practiced sun worshipping.

The earliest mention of the Konark in the history of Konark is in the Puranans when, the place used to be referred to as Mundira or Mundirasvamin. This name was later replaced by Konaditya or Konarka. One curious fact that one stumbles upon while flipping through the pages of the Puranas and other authentic religious texts is the fact that there already existed a Sun Temple at the place, way before the present temple came into being.

Konark happened to be a busy port that shared mutually beneficial trade relations with the South East Asian countries. The construction of the much renowned Sun Temple that exists now in Konark is credited to King Narashimhadev I belonging to the Ganga dynasty. The construction of this temple was the commemoration of his triumph over the Muslims. The temple later suffered the brunt of neglect and received the final blow when it was deconsecrated by the envoy of Jahangir, the Mughal Emperor.

There is more than one legend associated with the construction of the Sun Temple. According to one popular opinion, the Sun Temple was commissioned by Samba, Lord Krishna's son. Lord Krishna had cursed his son with leprosy. After undergoing a rigorous penance for twelve years, he was restored to health by the blessings of the Sun God and it was in his honor that the temple was constructed.

Air: The nearest airport is at Bhubaneswar, which is at a distance of 64 km away from Konark. The taxi cab charges about Rs 1400 to cover the distance from Konark to Bhubaneshwar. Bhubaneshwar is connected by regular flights to many major cities India including Chennai, Kolkata, Delhi and Hyderabad.

Road: Konark is connected to other cities in Orissa State Public Transport buses. Private Volvo bus services are available from Bhubaneshwar and Puri to Konark. Public buses charge about Rs 1.50 and private buses charges about Rs 3 per km travel.

Besides a temple town, Konark is a fascinating destination for shoppers as well. Konark is dotted with a number of shops dealing in various items including locally made items. The town is popular for its elegantly carved images of Hindu Gods and Goddesses, woodcarving and decorative items made of stone and horn. Patta paintings and the appliqué work of Pipli are other attraction of Konark. Another interesting buy include the marvelously embroidered umbrellas. If you are looking for some souvenirs, then visit the government emporium which have a fine collection of fabrics and handicrafts. For complete enjoyment of shopping in Konark take a leisurely stroll through the markets of the town. While exploring the markets on foot you will get an insight into the culture, lifestyle and eating habits of the local people.

Konark is famous for the exquisitely carved images of Hindu Gods and decorative items made of stone, horn and woodcarvings. If you are an art connoisseur, you should check out the Patta paintings and the appliqué work of Pipli.The brilliantly embroidered umbrellas make fascinating buys. If you are planning to buy souvenirs then the best option would be the government emporiums which stock fabrics and handicrafts items from across the state of Orissa.

Shopping in Konark is definitely a delight for shopping enthusiasts. The city is known for its exquisite handicrafts. One of the most popular shopping items of Konark comprises of the beautiful sculptures of Hindu Gods and Goddesses. Apart from that, there are a number of decorative items of stone and natural wood that sell like hot cakes in the market. For art lovers, the best buys in the city are Patta paintings. There is also a great demand for the appliqué work of Pipli, which is easily available here.

You can also buy beautifully embroidered umbrellas, to give as souvenirs when you get back home. The traditional fabrics of Orissa are also available in Konark and are definitely on the list of must-buy items. Now, we have an answer to ‘what to buy’ in Konark. As far as the shopping places in the city are concerned, the best place consists of Government run emporia, especially if you are looking out for some souvenirs or gifts for your near and dear ones. Along with that, there are a number of private shops also.

Though hotels in Konark have several guesthouses and tourist lodges the accommodation options are relatively limited. For those tourists who would prefer to travel from Puri or Bhubaneswar, then you will find a range of staying options at the hotels there.

Some of the prominent hotels in Konark are:

Festivals of Konark
Konark Music and Dance Festival is one of the most rocking festivities of Orissa, celebrated with much gusto and enthusiasm. It usually takes place in the month of December. The open-air auditorium of the Konark Sun temple serves as the venue of this wonderful festival. Konark Dance Festival is organized to promote the classical dances and music of India. It witnesses many exceptional performances by established performers as well as novices, who come here from the different parts of the country.

Accomplished as amateurs musicians come here to play various instruments, which include drums, cymbals, etc. It is a grand extravaganza that sets the mood of people with sounds of music. The dancing hall of the Sun temple is truly an architectural wonder. The designing of its wall, which is a reflection of the ancient times, is simply outstanding. Konark Dance Festival provides a golden opportunity to the newcomers to exhibit their talent.

One can witnesses almost all the classical dances of India in this festival, right from Odissi to Bharathnatyam to Manipuri to Kathak. Thus, it acts as a great platform for the dance connoisseurs and other performing artists to learn about different dance forms of the country. At Konark Music and Dance Festival, one can also see a Crafts Mela, displaying the ethnic craftsmanship of Indian artists. Then, there is the Food Mela, providing the most delicious delicacies of the country. The festival is gaining more popularity day by day, attracting a larger number of art lovers every year.

District
Puri
STD Code
06758
Best time to visit
October to March
Famous For
Famous throughout the world for its magnificent Sun Temple, which is dedicated to Surya, the Sun God.
Popular
Heritage