Kanyakumari is the southernmost point of peninsular India and the meeting point of three oceans-the Bay of Bengal, the Arabian Sea and the Indian Ocean. Besides its importance as a Hindu pilgrim center, it is famous for its beautiful views of sunrise and sunset over the waters. The multicolored sand is a unique feature of the beach here.

Kanyakumari weaves a magical spell over all those who visit this mesmerizing place blessed with nature's beauty in excess. Kanyakumari has that imposing splendor of striking sunrise and the soft sunset that simmer over the confluence of three oceans - the Bay of Bengal, the Arabian Sea and the India Ocean, whose every grain seems to seep inside your body, refreshing you to the core.

Kanyakumari is the southern most tip of peninsular India sprawling over an area of 1672 sq. km, occupying 1.29% of the total extent of Tamilnadu. With multi-colored sand on its beach, this exquisite land has a ringlet of majestic hills along with swaying coconut trees and paddy fields.

Vast and clear coasts with Azure Ocean lapping the shore, Kanyakumari is dotted with patches of red cliffs and valleys along with temples and churches that add to the resounding beauty of the place.

Kanyakumari is also known as Kanniyakumari in Tamil Language. As a major Hindu pilgrim center, devotees visit Kanyakumari from across the country. Delving into Kanyakumari's history, one finds the place to be onetime Alexandria of the east. The Cholas, the Cheras, the Pandyas and the Nayaks who contributed greatly to the architectural marvels of the region ruled Kanyakumari.

Apart from being a hub of art, culture, civilization, and pilgrimage for years, Kanyakumari is equally famous for commerce and trade. The architecture of this beautiful beach land is greatly inspired by religions like Islam, Christianity and Jainism.

Among the major tourist attractions in Kanyakumari is Kanyakumari temple dedicated to Parvati or Devi Kanya, who is also revered as the protector of India's shores. Kanyakumari is also home to Gandhi Mandapam that has oriyan architecture and built in memory of Mahatma Gandhi. There is also Vivekananda Memorial, about half a kilometer away from the mainland seated on a rock. The memorial has dhyan mandapam where you could sit and meditate.

Kanyakumari, lying on the southernmost point of peninsular India, is the meeting point of three oceans-the Bay of Bengal, the Arabian Sea and the Indian Ocean. Apart from being a famous tourist destination, it is also considered as an important Hindu pilgrim destination for the presence of some of the most sacred temples in south India like Kanyakumari temple. Famous for its beautiful views of sunrise and sunset over the horizons, Kanyakumari has been enticing tourists for ages because of its breathtaking location. The multicolored sand is a unique feature of the beaches here. The city is also blessed with almost all kinds of ecosystems that a tourist sets out to experience, one can see graceful beaches, gorgeous mountain valleys, evergreen forests and rubber and clove plantations in the deep interiors - all creates a perfect ambience to take-up a trip to Kanyakumari.
Kanyakumari is located at the southern tip of the Indian subcontinent. With an area of 1672 sq.km. Kanyakumari occupies 1.29% of the total extent of Tamil Nadu. The district name is spelled as ' Kanniyakumari ' in official records which are in tune with the spoken name of the district in Tamil language. The District is bound by Tirunelveli District on the North and the east. The South Eastern boundary is the Gulf of Mannar . On the South and the South West, the boundaries are the Indian Ocean and the Arabian Sea . On the West and North West it is bound by Kerala.
The small temple dedicated to Kanyakumari , or the youthful form of the primeval energy Shakti (Mother Goddess) is located on the seashore, in the town known by the same name. Kanyakumari was referred to by the British as Cape Commorin. Kanyakumari represents the site where the spiritual leader Swami Vivekananda spent days in meditation upon a rock off of the coast. A memorial built in his honor is accessible via ferry. There is also a recently built memorial to Tiruvalluvar, the author of the philosophical work Tirukkural - a treatise on the Indian way of life.
The Kanyakumari district was one of the worst affected districts in the Tsunami that ravaged the coasts of various countries in South and South East Asia, on 26th Dec 2004.
Situated by the shore, Kanyakumari enjoys a pleasant climate and can be visited throughout the year. During summers, the temperature can rise to mid thirties, while it can dip to a low twenty during winters. A tourist can indulge in a lot of adventure activities here like trekking, biking, swimming and surfing. So when you decide to spend your vacation in Kanyakumari, don't forget to pack your full traveling gear right from the swimming suit to trekking equipment all of which are sure to come in handy. 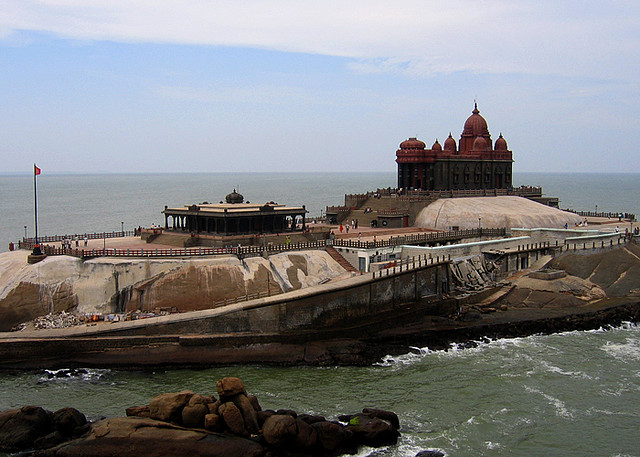 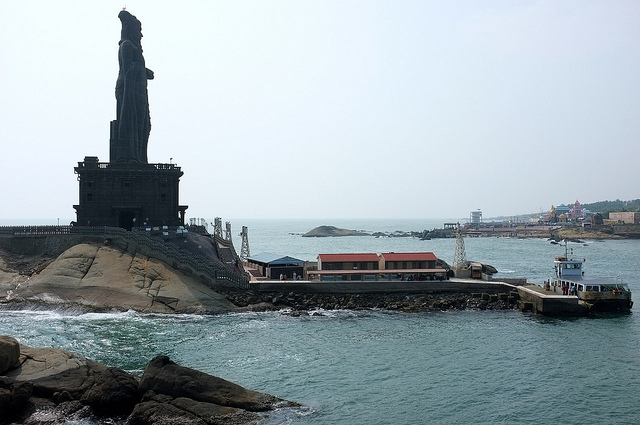 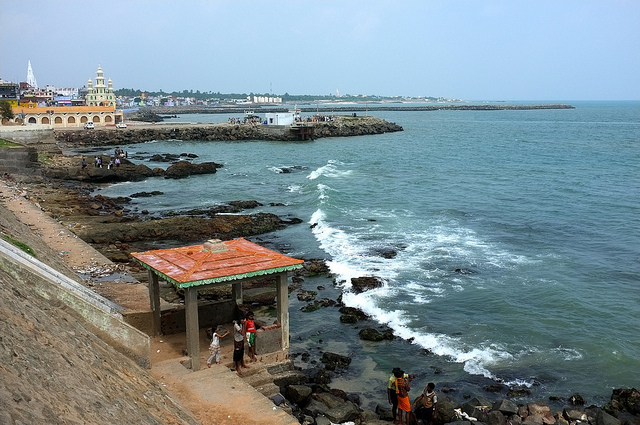 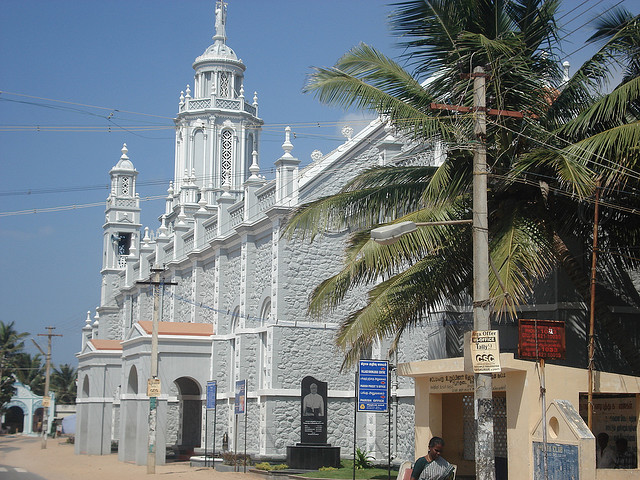 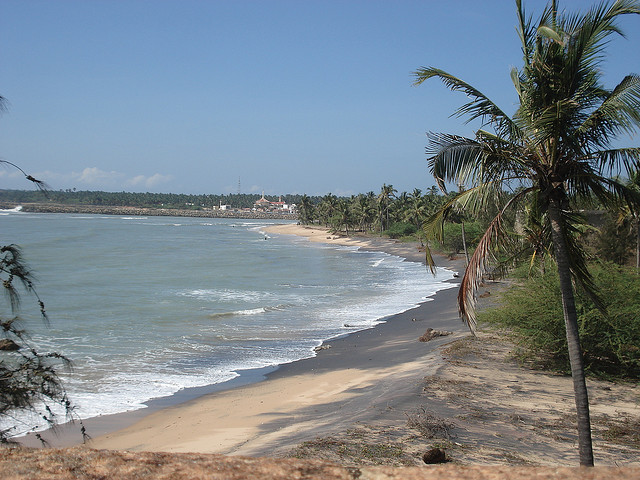 Kanyakumari was once referred to as the Alexandria of the east. This place has been a great center for art, culture, civilization, and pilgrimage for years. It was also a famous center for commerce and trade. During the early part of the eighth century AD Islam entered the southern part of India through the sea route with traders and missionaries. Through St. Thomas, one of the twelve Apostles of Christ, Christianity arrived in this area in AD 52. Islam, Christianity and Jainism have greatly contributed to the architectural wealth and literary heritage of this place. Kanyakumari was also under the control of the Cholas, the Cheras, the Pandyas and the Nayaks who were great rulers of south India. The architectural beauty of the temples is the work of these rulers.

During the British Raj, Kanyakumari was bestowed the dry title of Cape Comorin, necessitated perhaps by the Englishmen's inability to pronounce local names.

Legend has it that Kanya Devi, an avatar of Goddess Parvati, was to wed Lord Shiva, the destroyer in the Hindu trinity. But he did not turn up at the auspicious time and the wedding never took place. The rice and cereals meant for the marriage remained uncooked. Even today, one can buy stones there that look exactly like rice and cereals. Local folks believe that they are the leftovers of the legendary marriage that could not be solemnized. As for the princess Kanya Devi, she became a virgin goddess blessing pilgrims and tourists alike.

Air: Nearest Airport is Trivandrum International Airport which is at a distance of 87 km from Kanyakumari. Trivandrum airport is well connected with many major cities in India and abroad. Direct flights from many gulf countries are available from Trivandrum. Tourist taxi charges about Rs 1500 from Trivandrum to Kanyakumari.

Rail: The Kanyakumari Junction is just one km away from the central bus stand. The major railway station near Kanyakumari is Trivandrum Central, which is connected to all parts of India by rail. There are many staring trains from Kanyakumari, including trains to Delhi, and Bangalore.

Kanyakumari is not really a shopping destination. However in Kanyakumari, shopping for seashell items can be fun. What better gifts and souvenirs to carry home form this popular beach destination than beautiful trinkets made from seashells!
While shopping in Kanyakumari, you will come across beautiful decorative items made of wood and bamboo. Palmleaf drawings are also unique buys from Kanyakumari.

Kanyakumari is a famous Hindu pilgrim center besides being a popular beach destination, which offers beautiful views of sunrise and sunset over the waters. Some of the hotels in Kanyakumari, which face the sea, offer magnificent views of the sunrise and the sunset. You will enjoy the range of delicious cuisine especially if you are fond of seafood.

Some of the prominent hotels in KanyaKumari are: