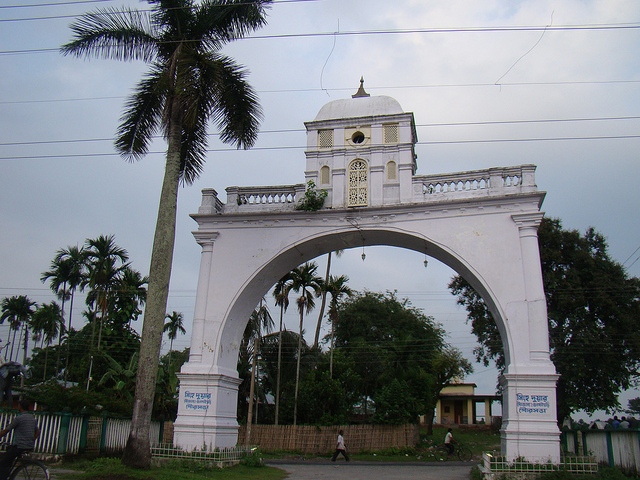 Jalpaiguri was initially founded as a trading centre, as the origins of its name suggests. The name Jalpaiguri comes from the Bhutanese term je-le-pe-go-ri, which means 'a place where warm clothes are bought and sold'. Some people attribute the name to the more common Bengali term jalpai, which means Olives and thus the name meaning the town of Olives.

The town was part of the Duars area of the old Kamarupa and later the Bhutanese kingdoms, which was later annexed by the British in 1864. They divided the captured area into two parts and merged the eastern half into the Goalpara district (now in Assam) and converted the western half into a new district of Western Duars and then in 1869, it was reorganised and renamed to Jalpaiguri, with Jalpaiguri town becoming the district headquarters.

The town saw its main boom period during the late 19th and early 20th century, when the British found the region northeast of the town (called the Dooars region), nears the foothills of the Bhutan hills very suitable for tea cultivation. Within a very small period the area was dotted with thousands of tea gardens, with Jalpaiguri town becoming the port-of-call for all going to those gardens. People flocked to the town to lay their hands on a part of the lucrative tea-trade. This resulted in the cosmopolitan nature of the town, with people from many parts of the country settling there. Business boomed and the town established itself as the premier commercial and cultural hub of the northern Bengal region. It also helped that the town was well connected with Kolkata (then Calcutta), as it lay on the main Railway link between Calcutta and Darjeeling (via the Hardinge Bridge and Parbatipur junction, now in Bangladesh).

The British had their own little spots in and around the town. The Jalpaiguri Club, the Race Course (now defunct), the beautiful bungalows along the banks of the Teesta and the Karala and the defunct airport at Panga, close to the town, bear testimony to this fact.

It is amazing how Jalpaiguri still retained most of its colonial character even fifty-plus years after independence. The core town possibly resembles more or less the same as it was during the end of the British rule. A walk along the Teesta beside the stately bungalows, built by the British, now housing the Government officials, would evoke the same feelings. A visit to the beautiful parks and gardens along the banks of the Karala gives peace to the strained city-dweller. This is colonial Bengal in all its glory.

By Air
Bagdogra airport is the nearest airdrome that connects Jalpaiguri district with the rest of India. Located 20 minutes away from Siliguri city, the airport is a major stop in the region, with flights connecting Kolkata, New Delhi, Chennai and Guwahati. Apart from this, the airport also extends helicopter services that connect it to the hilly terrains of Gangtok. Buses and hired taxis connect the place with the Jalpaiguri Township.

By Train
New Jalpaiguri Railway Station is the major railhead of the district, which links it to all the major cities in India. Famous as North Bengal's largest railway junction, it is located about 4 km from Jalpaiguri. The railhead comes under the administrative control of North East Frontier Railways. Apart from the regular rail services, the route also connects Jalpaiguri to Darjeeling, the legendary British hill station, by the world famous Darjeeling Himalayan Railways.