Fatehpur Sikri, situated amidst barren ridge, is actually a historical capital city made out of twin village of Fatehpur and Sikri. Emperor Akbar established this city, to serve jointly with Agra, as the imperial capital of Mogul empire. The surviving palace and mosque are a tourist attraction and a UNESCO World Heritage Site. The site itself is a ghost town. 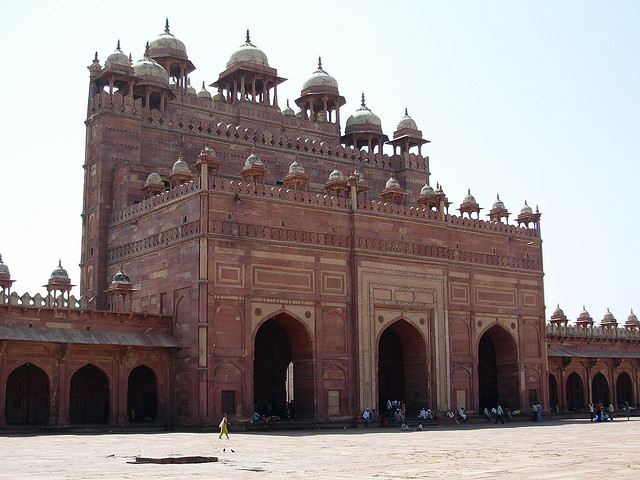 The History of Fatehpur Sikri dates back to the reign of Akbar, arguably one of the greatest and most charismatic rulers amongst the Great Mughals. Blessed with almost all the joys of life, the great Mughal emperor was, however, without an heir to the throne. It was this worry that led him to travel barefoot to Ajmer to seek the blessings of the great Sufi saint, Sheikh Salim Chisti, who eventually blessed the emperor with an heir to the Mughal throne in India, who was to be later known as Jahangir.

The entirety of the complex of Fatehpur Sikri was built as a kind of homage to this great Sufi saint, after whom the city was also named, an act that was a mark of gratitude shown by Akbar. According to modern historians, work on the construction of the complex began around the year 1571, a time when the prowess of the Mughals was at their peak. Once the construction of the fort was complete, the entirety of the complex of the Fatehpur Sikri began to serve as an additional capital to that of the Red Fort at Agra, which had till now been regarded as the only capital of the Mughal Rule.

The period of the Mughal rule with their capital at Fatehpur Sikri is regarded by modern historians as one of the most important periods in the annals of the History of India. It is said that many of the important administrative, financial as well as the military reforms of the Mughal era was conceptualized and implemented during this period.

It is said that the fort was abandoned at around the year of 1585, when a severe scarcity of water forced the people of the fort to look for a new settlement. Now one of the most popular tourist attractions of Uttar Pradesh, a trip to the Fatehpur Sikri in Uttar Pradesh in India is a definite must include since the monument is today a part of the prestigious World Heritage Sites as declared by UNESCO.

Rail: Fatehpur Sikri has a small railway station. You can catch one of those trains from Agra Fort station that goes via Fatehpur Sikri.

Road: Fatehpur Sikri is well connected by road. Agra is the nearest major town with bus, Rail and air connectivity. Another route is through Bharatpur, the town in Rajastan famous for the UNESCO World Heritage Site bird sanctuary.

There are some local shops and stalls near the city. But, since it is an abandoned old historical city, there isnt much to be had by way of shopping. Agra, only 40 kms away has a lot more to offer.

Agra has a wide range of hotels and rest houses. UPSTDC's tourist complex, Taj Khema near the Taj Mahal offers accommodation in tents and deluxe rooms.There is a UPSTDC Tourist Bungalow as well.