Yamunotri, one of the four holy places, is dedicated to Goddess Yamuna and is located atop the Bandhar Poonch Peak. It is the source of the river Yamuna and is famous for its thermal springs and glaciers, situated in the direction opposite to Gangotri and the road bifurcates and goes to Yamunotri from Dharasu, a place between Rishikesh-Uttarkashi. The route to this glacier is very arduous and so pilgrims generally offer their prayers at the temple itself. It can also be visited via Mussoorie and Barkot. 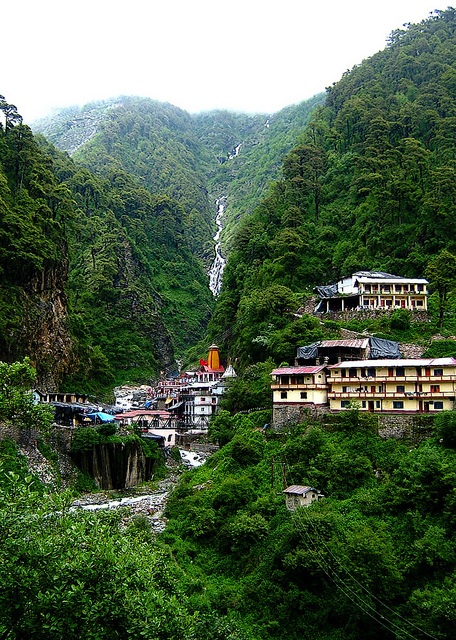 According to legend, holy Yamuna is the daughter of the Sun God, Surya and the Goddess of Consciousness, Sangya. Along with this, Yamuna is the sister of Yama, the God of death. This makes this place holy for any Hindu with a purpose that anyone who bathes in the waters of the river will never undergo a painful death.

Another legend says that the worshipped sage, Asit Muni, dwelled here in the ancient days.

According to the legend ancient sage Asit Muni had his hermitage here. All his life, he bathed daily both in Ganga and Yamuna. Unable to go to Gangotri during his old age, a stream of Ganga appeared opposite Yamunotri for him.

The temple and the place opens every year on the auspicious day of the akshya-tritya, which generally falls during the last week of April, or the first week of May.

The temple always closes on the sacred day of Diwali mid- Oct. - 1st week of Nov., with a brief ceremony, the temple staff return to their villages and for the rest of the time the valley is gripped in no man silence and covered with white sheet of snow. With melting of snow next summer, temple re-opens to blissful happiness of thousands of visitors again.

"The daughter of the Sun god, Surya and consciousness, Sangya the birth place of the Yamuna is the Champasar Glacier (4421 m) just below the Banderpoonch mountain. The mountain adjacent to the river source is dedicated to her father, and is called Kalinda Parvat. Kalinda being another name of Surya. Yamuna is known for her frivolousness, a trait that she developed because as per a common story - Yamuna's mother could never make eye contact with her dazzling husband.

By Air: Nearest airport is Jollygrant in Dehradun, which is 196 km away from Yamunotri. Jollygrant airport, Dehradun is connected to Delhi airport.

By Rail: Nearest railway station is Dehradun, which is nearly 172 km away from Yamunotri. This station is connected to all cities in India.

At an elevation of above 3000 mtrs, it reasonable not to expect markets. Untouched by man made structures this place promises free delights of nature and some basic utilities.

As the environment of Yamunotri is pious and religious, the visitors will find local markets selling the stuff for Puja and certain specialties. Apart from this, the visitors can also enjoy buying souvenirs and some holy dresses as a part of fashionable wears. Along with plenty of shopping options, the markets also have local restaurants that serve delicious and mouth watering food items. This will, definitely, make your journey quite enjoyable.

Yamunotri is a well known pilgrimage site in the state of Uttaranchal. Enjoy the benefits of wonderful accommodation in Yamunotri with a blend of charm and delight, you can choose to stay at any of the Yamunotri hotels. There are not many hotels and stay options in Yamunotri. The lodging here is limited to a few small ashrams and guest-houses. Pilgrims can find accommodation in the houses belonging to the 'Pandas' or the sole Dharamshala.

Hot Water Springs
The hot water springs at Yamunotri attracts many a tourists. It is believed that the waters of the springs has curative powers. Here you can see people preparing potatoes and rice in the boiling waters of the springs. One of the hot springs here, Surya Kund deserves mention as it is at this kund where devotees cook rice and potatoes to offer at the temple.

Trekking
A natural lake that happens to be the most enthralling spot in Yamunotri, Saptarishi Kund is regarded as the origin of Yamuna River. At an altitude of 4421 meters, this scenic spot is not easily accessible and it is considered as one among the most tedious treks in the Himalayas. A 10 kilometers awfully difficult journey covered with ice from Yamunotri. The exotic sight scenery of skating of the chirping flock through the snow covered ponds makes the trip a haunting memory.

Sapatarshi Kund offers an unruffled place on the backdrop of falcate glaciers, which holds the spectacular scenery of a partly visible peak of Banderpunch. With its murky bluish waters, pebbly banks and the rare display of Brahama lotus, Saptarshi Kund beholds delightful scenery. Before you venture your trip to Saptarsi Kund, it is necessary that you should familiarize with the climatic conditions of this region by staying a day at Yamunotri.

District
Uttarkashi
Location
278 kms from Dehradun
STD Code
01381
Termperature
Summer 6 to 20°C, Winter -7 to 5°C
Best time to visit
May-June, September-October
Famous For
One of the Char Dhams according to Hindu mythology, Yamunotri is the origin of the sacred river Yamuna.
Pilgrim
Popular Religious Sites
Char-Dham