Old Goa or Velha Goa ("Velha" means old in Portuguese) is a historical city in North Goa district in the Indian state of Goa. The city was constructed by the Bijapur Sultanate in the 15th century, and served as capital of Portuguese India from the 16th century until its abandonment in the 18th century due to plague. The remains of the city are a UNESCO World Heritage Site.

As the epicenter of Portuguese territory, Old Goa witnessed the profusion of magnificent churches and majestic buildings befitting the stature of the city. During its halcyon days, Old Goa became famous as the "Lisbon of the East." But soon recurring outbreaks of epidemics like cholera and malaria made the city highly inhospitable and the Portuguese moved their capital to Panaji in 1843.

With the patrons taking shelter elsewhere, Old Goa lost its pre-eminence and the awe-inspiring structures of the city were gradually reduced to ruins. Accorded the World heritage Site status by UNESCO, the opulent buildings and churches of Old Goa today reminds one of the grandeur of a bygone era.

What is today a World Heritage Site was once the capital of Portuguese Goa. Founded by Afonso de Albuquerque as his capital, Old Goa is dotted with an ethereal collection of churches, convents, chapels and a cathedral. Each more magnificent than the other. Historical evidences show that the architecture of Goa had striking similarities to the rest of the India during the pre-Portuguese era (fourteenth and fifteenth century). However, from sixteenth century onwards it took a different form altogether because of its colonial influence. Though the unique and harmonious Indo Portuguese blend is very visible in many aspects of Goa's culture but it is best depicted in the architecture of that period.

Nine kilometres east of Panaji, this site today stands reminding one of the golden years of Goa. It once had a population of two lakhs. The site was finally abandoned by Portuguese in 1843 when the capital was shifted from Old Goa to Panajm where it is till date. Old Goa is now maintained by Archeological Survey of India.

Old Goa is very important for Goans because of its churches. Especially the Basilica of Bom Jesus where the mortal remains of St. Francis Xavier are kept till date. Other attractions of Old Goa are Se Cathedral, Church of Our lady of Rosary, Chapel of St.Catherine. A trip to Old Goa will give you an interesting break from the beaches and give you a chance to peep in the rich history of the state. And Old Goa will come as a real treasure for those interested in studying historical architecture. 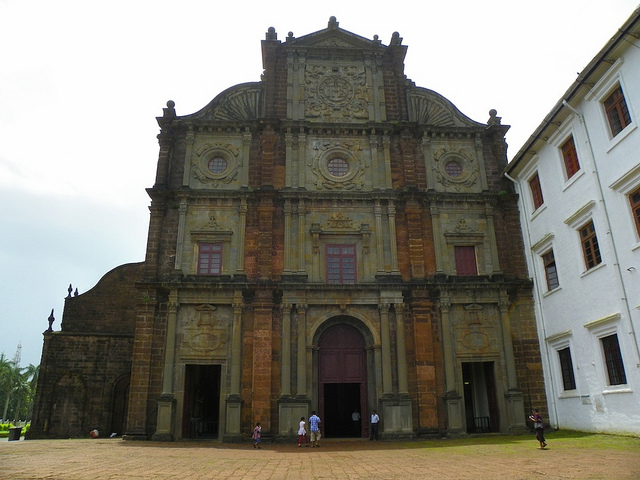 The city was founded in the 15th century as a port on the banks of the Mandovi river by the rulers of the Bijapur Sultanate. The city was built to replace Govapuri, which lay a few kilometres to the south and had been used as a port by the Kadamba and Vijayanagar kings. Old Goa was the second capital of Bijapur under the rule of Adil Shah. It was surrounded by a moat and contained the Shah's palace, and his mosques and temples. The city was captured by the Portuguese, and was under Portuguese rule from 1510 as the administrative seat of Portuguese India. The Viceroy's residence was transferred in 1759 to the future capital, Panaji (then Pangim), at the time a village about 9 kilometres to its west.
The population was roughly 200,000 by 1543. Malaria and cholera epidemics ravaged the city in the 17th century and it was largely abandoned, only having a remaining population of 1,500 in 1775. It was then that the viceroy moved to Pangim. It continued to be the de jure capital of Gôa until 1843, when the capital was then shifted to Pangim (Ponnjê in Konkani, Nova Goa in Portuguese and Panjim in English). The abandoned city came to be known as "Velha Goa" (in Portuguese, 'Old Goa'), to distinguish it from the new capital Nova Goa (Panjim) and probably also Goa Velha (also meaning "Old Goa"), which was the Portuguese name for the town located on the old site of Govapuri.

Velha Goa was incorporated into the Republic of India in 1961, together with the rest of Goa.

How to Reach Old Goa by Road
Buses run frequently from Panaji's Kadamba bus terminal to various locations of Old Goa. One can also hire auto rickshaws and taxis, which are costlier but more convenient.

How to Reach Old Goa by Rail
The Karmali railway station is the nearest railhead.

How to Reach Old Goa by Air
The Dabolim Airport is located 29 km from Panaji.

Shop for handicraft items and antiques in Old Goa as these are the best souvenirs that you can take back with you. Once you visit the local shops here, you will find plenty of exquisite artifacts encompassing bamboo work, trinkets made of stones and corals, brassware, artifacts made of papier-mâché, crochet etc. also don’t miss out on the local liquor, ‘Feni’, made of cashew nuts. You can also pick up a bottle of Port Wine, famous Goan liquor. Remember to bargain with the shopkeepers to have the best possible deals.

Visit Old Goa to buy yourself a antique, local wine called 'Fenny', cashewnuts or any traditional souvenier for your loved ones. Old Goa market looks very traditional and has got the best of Goan handicrafts and antiques.

Shopping in Old Goa is a virtual journey into the past of this erstwhile capital of the Portuguese rulers. Markets of Old Goa are just the right place for those looking for handicraft items and antiques to take back as memorable keepsakes. A vast array of exquisite artifacts encompassing bamboo work, trinkets made of stones and corals, Brassware, artifacts made of papier-mâché, crochet etc. would leave you mesmerized once you rummage through the local shops.

If you are a connoisseur of spirits and beverages, then don't miss out on the exotic Goan fare during your shopping in Goa. "Feni," a strong liquor made from Cashew nut, has assumed legendary proportions among the locals and tourists. You can also pick up a bottle of Port Wine, another famous Goan liquor. While one can shop till you drop, ensure that you bargain to your heart's content and clinch the best possible deal.

Accommodation is not available for tourists at Old Goa, you have to stay in Panaji which has good western style hotels and restaurants.
Deluxe Hotels : Goa Marriott Resort (Miramar, Panaji),