Diu is a city in Diu district in the union territory of Daman and Diu. It is a small island situated on southern east coast of Kathiawar, Gujarat separated from the mainland by a tidal creek. Diu is famous for being the location of the pivotal Battle of Diu in 1509 between Portugal and a combined force of Turkey, Egypt, Venice, Dubrovnik and the then Sultan of Gujarat, Mahmud Begada. The monuments are well maintained and beaches are uncluttered, gentle and serene making them perfect for sun bathing and swimming.

Diu is a city in Diu district in the union territory of Daman and Diu, India. It is famous for being the location of the pivotal Battle of Diu in 1509 between Portugal and a combined force of Turkey, Egypt, Venice, Dubrovnik and the then Sultan of Gujarat, Mahmud Begada.

Diu is a tiny island in the Arabian Sea, near the port of Veraval, connected by two bridges to the mainland. Chassi is its main river. It is an island lying off the south coast of Gujarat's Kathiawar peninsula, separated from the mainland by a tidal creek. The town of Diu lies at the eastern end of the island, and is famous for its fortress and old Portuguese Cathedral. It is also a fishing town. The village of Ghoghla, which lies on the mainland opposite the eastern end of the island, is also part of the union territory.

Pandavas during their fourteen years of exile are believed to have passed a few days at a place known as Mani Nagar (DIU) which was under the Yadavas led by Krishna Vasudeva during Mahabharata period. According to mythology, Diu was ruled by the great king Jallandhar who was a daitya (Demon) and was killed by Lord Vishnu with his Sudarshan Chakra. The temple of Jallandhar still exists in Diu. 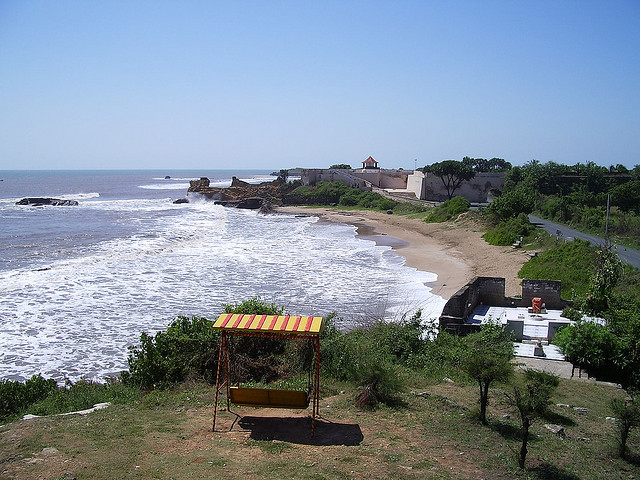 The Parsee community that fled religious persecution in Iran in the 7th century landed here before moving to the southern coast of Gujarat. Diu is a tiny little island in the Arabian Sea, comfortably and easily accessible on the sea route from West Asia to India and the Far East. The Sultans of Oman controlled the entire region during the 14th and 16th centuries and Diu became a flourishing trading post and naval base from where the shipping routes of the Arabian Sea could easily be controlled. Little wonder then that the Portuguese doggedly tried to gain control of this strategically placed enclave before finally succeeding in 1539, after almost twenty years. For the Portuguese, Diu and its counterpart across the Gulf of Cambay, Daman served as base for the lucrative opium trade with the east. Diu remained under Portuguese control till its independence in 1961, even though the mighty naval empire of Portugal had declined long ago.

Gujarat Airways is operating a daily flight between Mumbai and Diu

Nearest rail-head is Veraval, about 50 kms. From Diu train service is available from Veraval to Rajkot and Ahmedabad.

Shopping entails a lot of fun in Diu and it happens mostly on the beach where vendors sell handmade items and trinkets made of seashells and pearls. Other popular items sold here are leather slippers and handicrafts made of straw.