Rajasthan is among the richest states in the country as far as the field of arts and crafts is concerned. May be it was a result of the war-like lifestyle of the people of Rajasthan which sharpened the creative senses, artistic skills and inspired them to create the most opulent and richest of treasures.

Rajasthan is known for its traditional,colorful art. The block prints, tie and dye prints, Bagaru prints, Sanganer prints, Zari embroidery are major export products from Rajasthan. Handicraft items like wooden furniture and handicrafts, carpets, blue pottery are some of the things commonly found here. Rajasthan is a shoppers' paradise.

One of the richest states in terms of handicrafts - the skilled hands of the craftsmen of Rajasthan creates some beautiful treasures. Stone, clay, leather, wood, ivory, lac, glass, brass, silver, gold and textiles are transformed into works of art. From the colorful bandhani prints to the ornate meenakari and kundan jewelry - Rajasthan is a study in colors.

Shekhawati is Rajasthan's very own Open Air Art Gallery. The three districts of Churu, Jhunjhunu and Sikar form the mural-rich area of Shekhawati. The walls of the mansions owned by Marwari traders are adorned with some of the most exquisite frescoes, depicting a cavalcade of elephants, horses and camels.Get galvanized to explore the exquisite cities of Rahasthan, this is the charm and power that city of Rajasthan hold.

The culturally rich state of Rajasthan is also famous for its amazing arts and crafts. Be it stone or wood or lac or leather and a number of other items, each one of them is worked upon and given exquisite forms. Rajasthan arts and crafts are in the blood of the people of the state. They have existed as far back as the 10th century. Along with the passing time, more and more contribution was made to the creative pursuits of the rajasthanis. An arts & crafts tour of Rajasthan will make you fall in love with the rich handiwork of the Rajasthanis.

The former kings and nobles of Rajasthan provided the main patronage to the craftsmen of the state. Right from the elephants to the palaces to the mud huts, everything was decorated with the same details. This encouragement given at that time slowly and gradually contributed to the arts and crafts of Rajasthan in their present form. Even the clothes were given special attention. The clothes of the warriors were exquisitely designed and their armor was bejeweled and intricately carved. For the womenfolk, there was a wide variety, ranging from tie and dye fabrics, to enameled jewelry to embroidered jutis.

As the rulers kept on changing, more and more art forms were added. The artisans of the Rajput rulers were even encouraged to set up schools of their crafts. All this led to the Rajasthan arts crafts, as we know of them now. 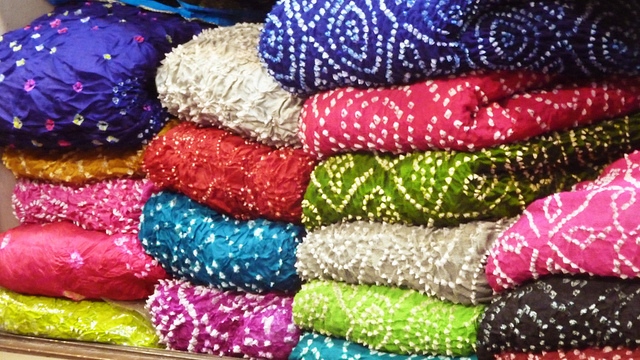