Cut into the sandstone hill, six km from Vidisha and 3 km from Sanchi are a group of rock-cut cave sanctuaries. . This archaeologically important site of antiquity is between the rivers Bes and Betwa. The site is mainly known for its ancient rock-cut temples excavated in an isolated stand stone hill and the numerous Buddhist remains in its neighbourhood. This isolated hill extends from North-West to South-East and is about a km. long, rising to a height of about 110m above the plain. Traces of some ancient buildings were also found here. These temples are known as Udaigiri. Some of these contain inscriptions, dated and undated, of considerable importance. The caves are mostly small chambers, enshrining idols or images of various dynasties carved into the rock of the hill. The caves and the other remains found at the site show that the site has passed through the influence of Buddhism, Jainism and Hinduism in those days. An inscription in one of these, states that it was produced during the reign of Chandragupta-II (382-401 AD), thus dating these caves to 4-5 AD.

The caves possess all the distinctive features that gave Gupta art its unique vitality, vigour and richness of expression: the beautifully moulded capitals, the treatment of the intercolomination, the design of the entranceway and the system of continuing the architrave as a string-course round the structure.

They have been numbered probably according to the sequence in which they were excavated, beginning with Cave 1, which has a fontage adapted out of a natural ledge of rock, thus forming both the roof of the cella and its portico. The row of four pillars bear the 'vase and foliage' pattern, of which the eminent art historian, Percy Brown, so eloquently says: "the Gupta capital typifies a renewal of faith, the water nourishing a plant trailing from its brim, an allegory which has produced the vase and flower motif, one of the most graceful forms in Indian architecture."

Characterised by richly carved facades and doorways, the shrines are progressively more spacious and more ornate. Cave No. 9 is remarkable for its large cell and massive, 8 feet high pillars, its long portico and pillared hall. Throughout, there is evidence that master craftsmen of Besnagar practiced their art with skill and artistry under the Guptas, four centuries later. Cave No. 5 is awe-inspiring in the sheer magnificence of the vision of its builders: here, a massive carving depicts Vishnu, in his Varaha (Boar) incarnation, holding the Earth Goddess Prithvi aloft upon one tusk. Yet another stupendous sculpture is of the reclining Vishnu. 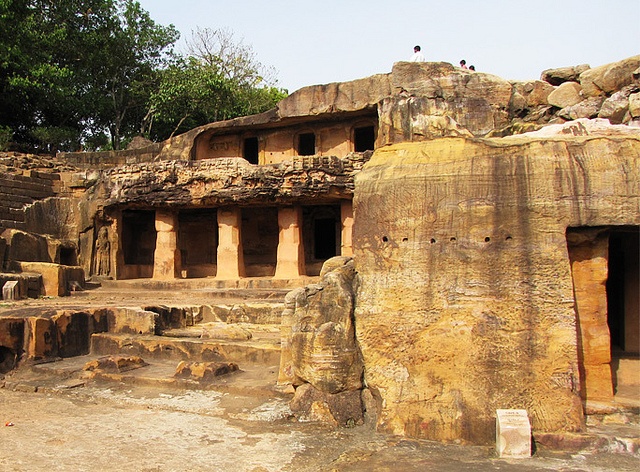