Built in the year 1851, Rangji temple in Vrindavana is a typical example of South Indian temple architecture. Its impressive gopuram and the high walls exhibit characteristic features of a classic south Indian temple. This imposing façade was the contribution of the seth family of Mathura and it showcases Lord Sri Ranganatha or Rangaji as the principal deity. Rangji is one of the personifications of Lord Vishnu and it is depicted in the form of Anatha sayanam (the lord retreats on the celestial serpant Anatha).

Rangji temple is one among the biggest temples in Vrindavan and its dravidian style construction especially the fifty feet dwajasthambha needs special mention. This temple is quite famous for the ten days Brahmotsava that usually falls in between the months March-April. Thousands of devotees come to participate in the ratha yathra, which is marked by the pulling of the lord’s chariot by them to the adjoining gardens. Another auspicious occasion in the temple is the annual Jalvihar festival in which the deity is accorded a regal bath in the near by kund. The rituals and customs in the temple are in accordance with the precedents set forward by Andal, one among the famous Vaishnava Saints of South India. 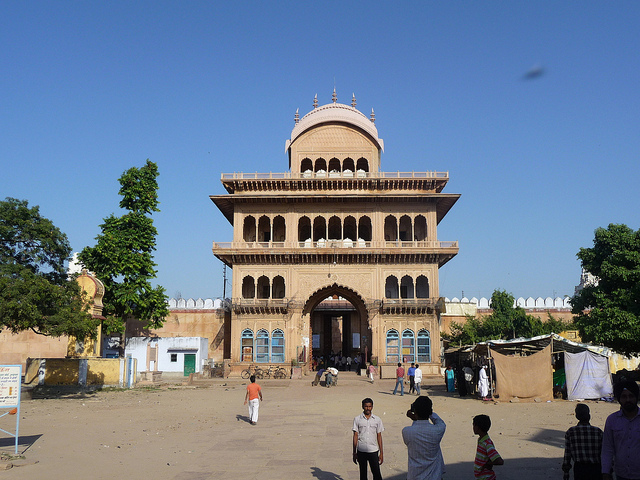