Panaji is the capital of the Indian state of Goa. It lies on the banks of the Mandovi estuary, in the district of North Goa. With a population of 65,000 (a metropolitan population of 100,000 if suburbs are included), Panaji is Goa's third largest city after Vasco da Gama and Margao.

Panaji means “Land that never floods”. Panaji is the capital of Goa and headquarters of North Goa District, a small and charming city on the left bank of the Mandovi River, with red-roofed houses built in Latin style, also has modern houses, well laid gardens, statues and avenues lined with Gulmohar, Acassia and other trees. The church on the main square, the Baroque architecture, pretty villas, cobbled streets and interesting buildings give Panaji a Portuguese ambience. The city lies along the left bank of the Mandovi River - piled up against terraced hills, a jumble of concrete buildings with whimsical balconies and red-tiled roofs, bleached clean churches and a riverside promenade.

Goa’s capital, Panaji is an exquisite tiny city with the river Mandovi flowing along one side of the town. It has retained its old world charm as you can still find in some of the areas having red-roofed buildings, and also a Latin Quarter at the eastern part of town. This city offers panoramic views of the surroundings and it is strewn with the well-laid gardens, impressive statues and avenues. There are many things about Panaji that have drawn tourists not only from the domestic but also from the international circuit. There are several places to visit in Panaji such as Miramar beach, Marine Biology Museum and Taxonomy Reference Center of the National Oceanography Institute. Besides, don’t miss out the mouthwatering dishes of Panaji that would titillate your taste buds. Touristplacesinindia.com is the site you can browse through for the important inputs about Panaji that would be of great help to those who are planning a tour to Panaji.

Located along the banks of River Mandovi, Panaji is the capital of Goa. Once a nondescript fishing village, Panaji started to gain prominence during the second half of the 18th century when the erstwhile power center of Old Goa gradually faded into oblivion. On March 22, 1843 Panjim was conferred the status of a city and was rechristened `Nova-Goa' or New Goa.

As the Portuguese strengthened their hold over Goa, Panaji developed into a vibrant city bustling with commercial and tourism activities. The Christian rulers built some of Goa's most majestic churches here. The quaint villas and pretty houses with red roof tiles present an enchanting spectacle in Panaji. Most of these buildings bear the hallmark of Portuguese architecture.

As the state capital, Panaji figures prominently in Goa's tourism scenario. It houses some of the prominent government offices and educational institutions. The 15th century palace of Sultan Adil Shah, now housing the government passport office, is a major landmark of the Panjim city. Other major tourist spots include the Dona Paula beach, a bevy of ancient churches and the Braganza Institute.

Panjim, the capital city of the State of Goa, welcomes the tourists with its twin arms, the two bridges which adorn the highway leading towards Panjim. The capital is the central place for moving across Goa. Replete with Old Churches and Villas Panjim has carefully stored its historical heritage while warming up to the new culture and advancements. The river Mandovi flowing through the city provides an additional opportunity for enjoyment.

Panjim was made the capital by the Portuguese after an epidemic forced them to abandon the old capital. The entire city including the buildings and monuments was shifted to Panjim. The capital city, now boasts of an Interstate Bus network as well as a well oiled state machinery in service of the tourists.

Panaji, built on the south bank of the Mandovi River, is one of India`s smallest and most pleasant state capitals. It became the capital of Goa in 1843 when Old Goa was finally abandoned.

Each year on Sabado Gordo (Fat Saturday), a colourful carnival is organized with attractive floats. The carnival begins with the arrival of King Momo, who orders his subjects to forget their worries and have a good time.

Panaji is worth a visit, though most travellers just pass through the city on their way to the beaches or to Old Goa. 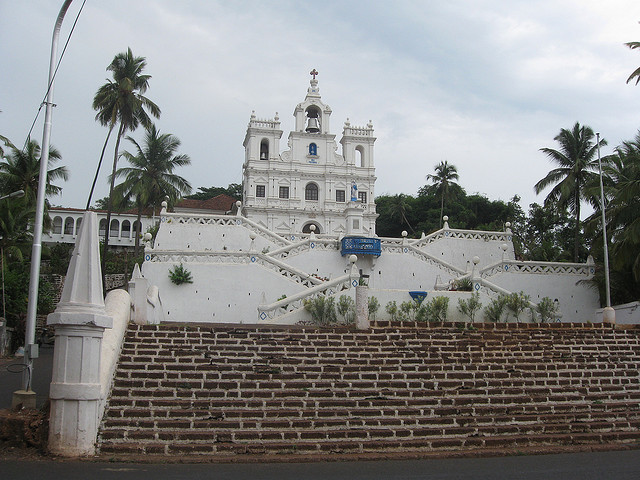 The history of Panaji goes back to the olden days of Purta Dharmas when the Kadamba king, Shasthadeva (1007-1050) entrusted Kalapa with the administration of Panajim. The inscriptions gathered from here reveal that Panajim was earlier known as Pahajani Khali - Pahajani from which Panajim allegedly got its name and Khali possibly refers to the creeks and backwaters flourishing in the area.

The Portuguese after the conquest of Goa, called Panajim as Panaji or Ponji. The Viceroy Dom Manuel de Saldanha de Albuquerque on December 1, 1759 took his residence from Panelim to Panajim. The old castle of Adil Shah was completely refurbished and a palace was built where the Government Secretariat stands at present.

After the collapse of Old Goa in the 19th century, Panajim was elevated to the position of a city on March 22nd 1843 and was renamed `Nova-Goa' (New Goa). After Goa became independent from the rule of the Portuguese in the year 1961, it came to be known as Panajim.

How to Reach Panaji by Road
Buses of state transport corporations of Goa and the neighboring states ply from the Kadamba bus stand, Panaji's main bus terminal. Private operators also run bus services to different destinations of the state.

How to Reach Panaji by Rail
The Panaji railway station is part of the Konkan Railway network. Trains run between Panaji and prominent cities such as Mumbai, Bangalore, Hyderabad and New Delhi. The Vasco Da Gama railway station is 30 km away from Panaji.

How to Reach Panaji by Air
The Dabolim Airport is located 29 km south of Panaji. Domestic flights operate between Dabolim and major cities such as Mumbai, Bangalore, Kochi, Delhi, Chennai and Thiruvananthpuram.

Shopping in Panaji is an exciting affair. Untouched by the advances in technology and development, you can find a range of handicrafts and traditional Goan items. For branded shopping, head to colourful MG Road and the 18th June markets. You can shop branded clothes - cottons, denims, salwar kameezs, kids wear and sarees, shoes - leather, sport shoes, rainwear and jewellery in these markets. In these markets you will also find the liquor and wine shops.

Browse through the Panaji Corporation market where you will get everything, from local and exotic fruit and vegetable to fresh and dried fish. People come here to buy tiger prawns, mackerel, kingfish, squid, crabs, pomfret, mussels and oysters. The market also has stalls selling cloths, bags, shoes, electronic gadgets, spices, flowers and sweets.

Goa is a shopper's haven and the capital city of Panaji is one of the most exciting shopping destinations in the state. The shopping experience in Panaji is a blend of the exotic and the modern. While the local markets are a treasure trove of indigenous handicrafts, the upscale shopping malls teem with designer boutiques and international brands.

Scour the markets of Panaji for a wealth of artifacts including brassware, terracotta, shell work, Curios and old coins, carved furniture and a lot others. The Miramar beach, located 3 km away from the city, is another shopping hub thronged by locals and tourists alike. Local fisherman turned vendors would fall over each other too the potential customers. The ideal place to shop for trendy beachwear and hammocks.

Apart from the local markets, the government emporia in Panaji also do brisk business. The Goa Handicrafts Industries Development Corporation Emporium at Tourist Hotel in Panaji draws a number of shoppers with its offering of handicrafts.

In Panaji you will find a number of good hotels that will suit your budget. Make your selection from a wide range of hotels in Panaji that include five star and three star hotels, inns, guest houses and lodges.
5 Star Hotels : Goa Marriott Resort, The Majestic Goa.