252 kms from Bangalore and 1525 m above sea level lies Madikeri, the district headquarters of Kodagu. Coorg or Kodagu (originally called Kodaimalenadu) means 'dense forest on steep hill'. Dubbed as the Scotland of India, this town has a lot to offer to the tourist. Misty hills, lush forest, acres and acres of tea and coffee plantation, orange groves, undulating streets and breathtaking views are what make Madikeri an unforgettable holiday destination.

Formerly known as Dwarasamudra, Halebid is also referred as the Gem of Indian Architecture. Once the capital of the Hoysala Empire after Belur, Halebid is famous for the remnants of the glorious Hoyasala period and has one of the finest Hoysala temples.

Coorg is on the Western Ghats. Set amidst verdant valleys, imposing mountains and teak wood forests, this is one of the most beautiful hill stations you can visit. It lies on Karnataka's southwestern end, covering an area of 4,102 sq km.The river Cauvery originates here at Talacauvery and is worshipped by the locals.

The Kodagu district comprises different communities - Kodava, Tulu, Gowda, Moplah out of which the largest is the Kodava community, both economically and politically. The economy depends on agriculture, coffee plantations, foretry and tourism.

There are many versions behind the origin of the name Kodagu. According to the Puranas, Kodava is the redifned name of Krodhadesa, meaning 'Land of Anger', said to have been inhabited by the Kodava tribe. While for some, it is believed to hve been named after the River Cauveri, where 'kod' means 'give' and 'ava' means 'mother' - which means Cauvery is the 'mother to the people'. Few believe the name originated from the Kannada kudu which means 'dense forest' on a steep hill. It is said that the history of Coorg dates back to as early as 888 AD.

The kingdom was ruled by many dynasties, starting with Gangas of Talakad, Kadambas, Cholas, Kongalvas, Changalvas, Hoysalas and Nayakas. Information on its early history has come primarily from the various inscriptions on stone and copper plates of 9th - 10th century.

The Haleri dynasty was the last noteworthy dynasty to rule the whole of Kodagu. It came into power around mid-16th century and was founded by a young price from Ikkeri. It was the first dynasty in the history of Kodagu, whch spanned 234 years and ruled the entire region. 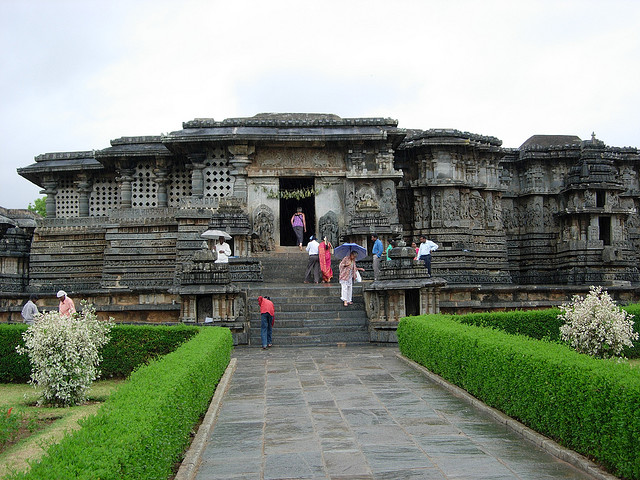 The construction of the Hoysaleswara Temple was completed in 1121 by King Vishnuvardhana. During the early 14th century, Halebidu was looted by Muslim invaders from Northern India, Malli Kafur (of the Delhi Sultanate), and the temple fell into a state of ruin and neglect. However, enough of the temple complex remains to showcase the greatness of the artistry of the site.
Sadly, while the Hoysala empire is very much part of Karnataka's historical consciousness and the sculpture and dancing of that era are still commemorated in the state, there is very little beyond the temples in Belur and Halebidu that remains in terms of the archaeological legacy of the Hoysala era.

Rail: The nearest railway station is Hassan, which is 27 km from Halebid. It takes about Rs 400 for taxi to reach Halebid from Hassan. Hassan is connected to many cities in Karnataka and neighboring states.

Road: Halebid is well connected by KSRTC bus services. It is connected to all major cities nearby, including Bangalore, which is 222 km away from Halebid. Private buses are available from Bangalore majestic bus station to Halebid, costing about Rs 600.

Halebid, the temple town in Karnataka is a must see place for the spiritual tourist. Shopping in Halebid can be fascinating for tourists looking for stone idols, sculptures and terracotta items. Hassan enroute to Belur is also a good place for shopping for curios, which are typical of the state of Karnataka.

Karnataka has a rich tradition of handicrafts and silk sarees, sandalwood, ivory brassware and wooden toys that you can buy in Bangalore from the government-sponsored emporia or from the numerous shopping malls in Bangalore.