Badami is an ancient town in the south Indian state of Karnataka. Formerly known as Vatapi, it was the capital of the powerful Badami Chalukya Empire that controlled the entire region from 450 A.D. to 750 A.D. Badami is built in a ravine at the base of a red sandstone ridge, which encircles a beautiful body of water called the Agastya Lake.

Badami is well known for its rich history and ancient architecture. It was the ancient capital of the early Chalukya kingdom. A number of richly carved monuments and caves belonging to Chalukyas, dating back to the 6th and 7th centuries can be found here. The Chalukyas laid the foundation of a unique style of architecture, which is a fine blend of North Indian Nagara style and the South Indian Dravidian style of architecture. The architecture and sculptures created in Badami during the time of the Chalukyas inspired later-day architectural and sculpting traditions. A number of places of historical importance are situated near Badami.

Badami is located in the northern part of the state of Karnataka, in the southern region of India. It is situated near a red sandstone ridge. The climate of Badami is temperate with summers (April-June) being moderately hot while winters are cool and pleasant (November-February). It is 550 km from the city of Bangalore. It experiences southwestern monsoon rains in the months of June and July.

Badami, the one time capital of the Chalukyas , is noted several temples, some structural & other rock-cut, of the 6th & 7th Centuries. The foundations of Badami, or Vatapi as it was called, were laid by Pulakeshin I (535 - 566 AD), his son Kirtivarman the Ist (567 - 598 AD), beautified the town with temples & other buildings.

Mangalesha (598 - 610 AD), brother of Kiritavarman I completed the construction of the cave temples & endowed the temples with the village on the occasion of the installation of the image of Vishnu. The greatest ruler of the dynasty was Pulakeshi II (610-642 AD) who among others defeated the Pallava King Mahendra Verman I. The Pallavas later captured & destroyed Badami to avenge their defeat. Badami was also in the possession of the Vijayanagar Kings, The Adil Shahis of Hyderabad, The Savanur Nawabs, The Marathas, Hyder Ali of Mysore & finally the British who made it part of the Bombay Presidency. 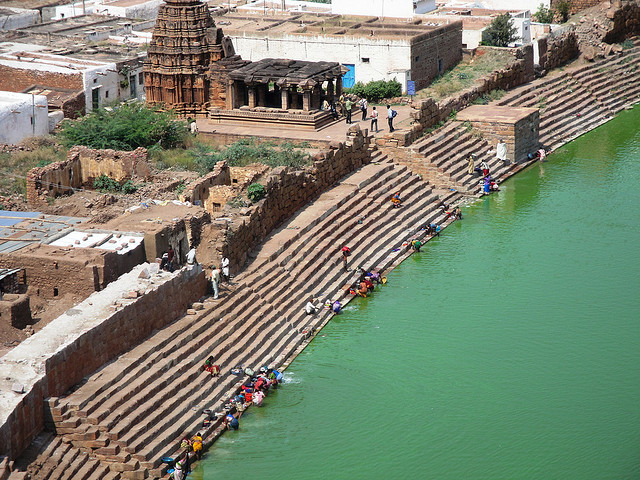 Badami was the regal capital of the Chalukyas from 540 to 757 AD. The Chalukyas, constructed several beautiful buildings in the traditional Dravidian architectural style associated with the temples of South India. The location of the town in the northern extreme of Karnataka exposed the rulers to north Indian architecture, and they soon blended the two in many of the subsequent constructions. Following the decline of the Chalukya Empire, subsequent rulers added their own different styles to new constructions. These include the Rashtrakuts, Kalyan Chalukyas, Kalachuryas, Devangiri Yadavas, Vijayanagar Empire, Adil Shah of Bijapur, and finally the Marathas in the 19th century. Subsequently it was under British control till India gained independence.

Air: The nearest airport to Badami is Belgaum, which is about 190 km away. Belgaum is connected to Mumbai by domestic flights. From Belgaum to Badami, taxi charge is about Rs 3000/-. Bangalore is the nearest International Airport, from where it requires about 12 hours travel (about 500 km) to reach Badami by Taxi/ buses.

Rail: Nearest major railhead is Hubli, which is about 100 km away. Hubli is well connected to all major cities. There is a small station near Badami which is about 5 km from the heart of the city. It takes about Rs 25 by three wheeled rickshaw and Rs 100 for taxi.

Road: Badami is connected by state transport KSRTC to Hubli and Bijapur. Tourist buses are available from Bangalore to Badami daily. This costs nearly Rs 1500 by tourist bus.