Located at a height of 17,500 feet, Gurudongmar Lake is popular as one of the highest lakes in the world. The lake lies adjacent to the Tibetan plateau on the northern side of the Khangchengyao Mountain in North Sikkim. In ancient times, the lake remained frozen all the time and hence, there was no source of water in the area.

According to legend, once Guru Padmasambhava, who brought Tantric Buddhism to Tibet in the 8th century, passed through the region. On his arrival, local residents pleaded him to provide them with a source of water. As Guru Padmasambhava touched certain portions of the lake, the snow melted. Till now, the portions touched by him do not freeze even in extreme winters. Since then, the water of the lake is considered sacred by Buddhists and Hindus.

The main attraction near the lake is Sarva Dharma Sthal, which is a place of worship for people of all religions. Gurudongmar Lake can be visited by only tourists of Indian nationality. Lachen, which is about 120 km away from Gangtok, forms the base for Gurudongmar Lake. Tourists can reach Lachen by taxis from Gangtok or by buses from Mangan.

Additionally, Gurudongmar can also be visited as a part of a North Sikkim Package Tour, which is organised by authorised travel operators. The best time to visit this lake is from March to June and again from November end to December. 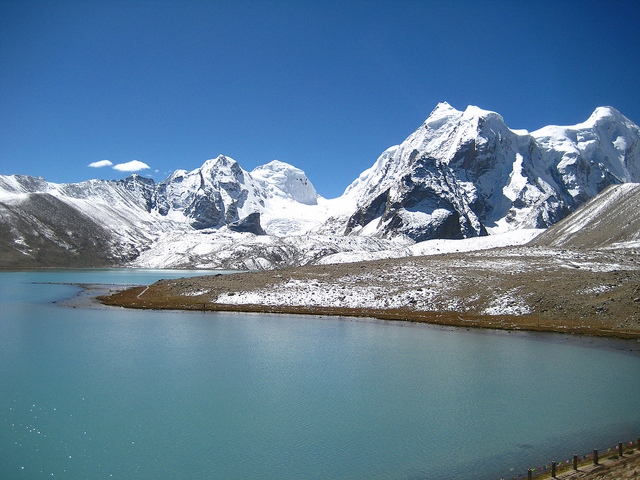