Omkareshwara temple was built by Lingarajendra in 1820. It is located very near to the heart of the Madikeri. The temple has both Islamic and Gothic style of architecture. There is a tank in front of the temple and a footpath leading to a small "Mantap".

It is said Lingarajendra killed an honest and pious Brahmin to fulfill his political ambitions. That Brahmin became a "Brahmarakshasa"and started troubling the king. The king got rid of him only when he brought a Shivalinga from Kashi and installed it after building a temple. The Shivalinga was named as "Omkareshwara" and regular rituals were performed.

The bars of the windows of the temple were made of Panchaloha and an alphabet lim has been placed in between the bars.

With a dome in the middle of a square lake and minarets at each corner, this is a catholic mix of Keralite, Gothic and Islamic architectural styles. Built in 1820 by King Lingarajendra. Built by Lingaraja in 1820 AD and dedicated to Lord Shiva, this temple is a quaint mix of Islamic and Gothic styles.

The gold leaf inscription atop, accessed through a narrow flight of interesting steps used by the king to survey his Kingdom, the fishes in the pond which leap in symphony to gobble food offered to them, are all worth noticing. The annual 'Teppothasava' or "Boat Festival" is a memorable event. 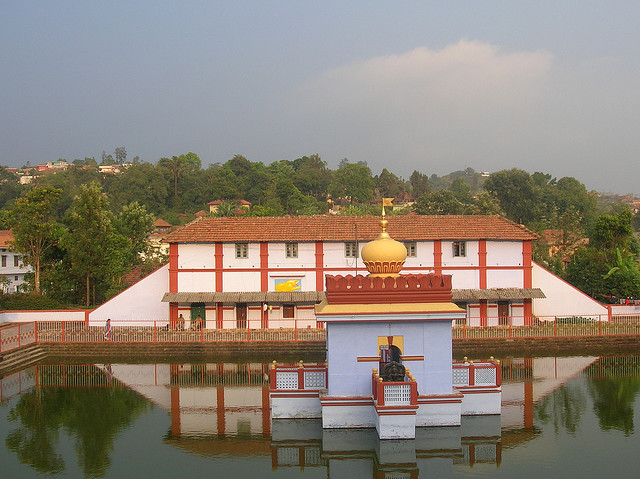