Located northwest of the Chaugan, the Hari Rai Temple in Chamba was built in the 11th century by Salabhana. The temple is dedicated to Lord Vishnu in the form of Chaturmurti. This stone temple built in the Shikara style stands on a stone platform and has beautiful carvings.

There are structures like the Gandhi Gate and the Fire Station Building right in front of the temple, blocking and hiding much of the temples appeal from the outside. However the Gandhi Gate built in 1900 to welcome Lord Curzon is the easiest landmark to find in Chamba because of its saffron color.

This temple is dedicated to Lord Vishnu and dates back to 11th century. Salabahana probably built it. This temple lies in the northwest corner of the main Chaugan, which had become the official entrance to the town by the end of 19th C. A steep path leads to the old Shitla Bridge, which was constructed in the year 1894. The temple is built in Shikhara style and stands on a stone platform. The Shikhara of the temple is finely carved. This is one of the major old temples, which is away from the old township and the only one near the Chaugan.
Much of this temple is hidden behind some unimaginative structures of the British period behind the Gandhi Gate and the Fire Station Building. The Gandhi Gate was built in the year 1900 to welcome Lord Curzon, Viceroy. It is the only structure that has been coated with saffron colour and stands out because of its prominent colour.
The temple enshrines a marvelous bronze image of Lord Vishnu in the form of Chaturmurti. The temple of Hari Rai is believed to be of great antiquity and legend affirms that the Ravi once flowed in a shallow stream across the Chaugan and the temple had to be approached by stepping-stones. 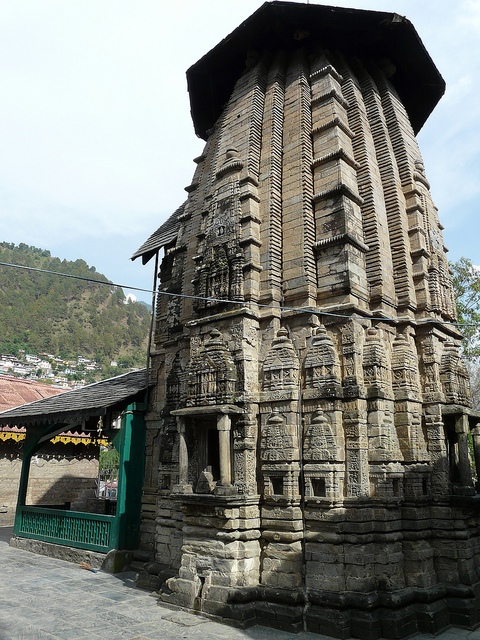