Punjab has a rich tradition of its colourful handicrafts and richly embroidered hand woven textiles. Silk, woolen and cotton fabrics are used for the purpose.

The crafts in the Punjab are of two types: the crafts produced in the rural areas and the royal crafts which flourished in the urban centers particularly in Lahore. The former include cotton textiles, basketry, embroidery etc. while the latter are tile and woodwork skills, ivory, silver and gold work, naqqashi and architectural crafts.

Certain families in Punjab have been dedicated to the development of folk art. The carpenters while making doors, cots etc have been enriching them with various designs in wood carving. Goldsmiths have been making ornaments in almost a hundred different designs. The common fountain of inspiration has always been their innate urge-for artistic creativity. Punjabi women are very fond of jewellery. The designs of jewellery and the motifs carved on them have undergone many changes. Before the coming of the Muslims images of the sun, the moon and various gods and goddesses were engraved on gold and silver ornaments. The Muslims replaced gods and goddesses with floral motifs. The folk art of the Punjab is essentially a synthesis of all the traditions which the various incursions and racial elements brought with them.

Punjab has a rich tradition of arts and crafts. The richness of the land is reflected in its handicraft. The people of Punjab lay much importance on their artistry and the minute details of their work. You get to see their skill woven even into the footwear, daily dresses, carpets and almost every other thing. The artistic creations of Punjab are acclaimed all over the world. The skilled and dexterous artisans of the state produce a variety of handicrafts and even the rural women have a major contribution in the production of these fascinating art works. Mud work is a famous rural practice in Punjab, prevalent from the ancient times. It is a trend in Punjab to mud-plaster the walls of the house and then, create motifs and designs on the mudded walls.

Metalwork is also very popular in Punjab. Utensils made of metals are used in households, as also for religious purposes. Carpenters in the state make Peeras or Peerians, decorative boxes, pidhis and toys of wood, which are very popular in the whole of North India. Thin straws of glass are used for basketry works, which is another Punjabi craft that is immensely popular. Mats, rugs, carpets, curtains and hand fans are woven using these straws. Embroidery is another extensively followed work of art, known in the state by various local names. Phulkari, an intricate needle work, is extremely popular and is mainly taken up by village girls. There are many other handicrafts specific to the place, with the most popular ones being described in this section. 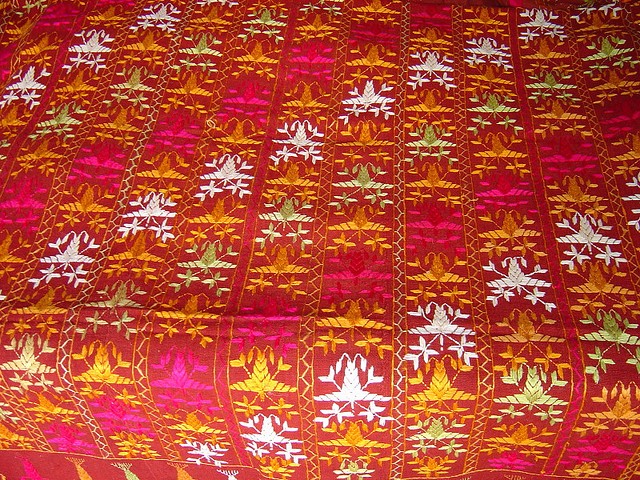