Uttar Pradesh is the land of art and artisans. The state boasts off some of the most popular centers of art tradition in India. The state has patronized art forms since the days of Moguls. Emperors like Akbar, Shah Jahan, Dara Sikoh and Farrukhsiyar were the great patrons of art and promoted various traditions during their reign. Nawabs of Awadh and other nobles later carried the tradition forward. This is the primary reason why from Benaras to Agra, every small or big town is famous for some or other craft in Uttar Pradesh.

The arts and crafts in Uttar Pradesh are not famous only in India but all over the world. Right from the silken saris to the earthen pottery, carpets weaving to chikankari embroidery, Uttar Pradesh are always on the forefront in artifacts. Specific region deal with the specific art or craft such as Varanasi for its silken saris, Mirzapur and Bhadoi for it carpets, Agra and Kanpur for their leather craft, Moradbad for its metal ware, Lucknow for its cloth work and embroidery, and the entire state for its pottery.

Uttar Pradesh is famous for its rich heritage of art and craft. Most famous centres are the following:

 Bareilly boasts for its Zari work, (a type of fabric decoration), Surma (Kohl) and intricate ear-rings or ear-pendants called 'Jhumka'.
 Firozabad, the city of bangles, is also a hub for crafting many glass accessories. The glass artifacts produced in its factories are of high value and are exported all over the country and around the world.
 Kannauj is well known for oriental perfumes, scents and rose water and also for traditional tobacco products.
 Kanpur is internationally known for its leather craft; shoes and other leather items are made here for the Indian market and exported to foreign countries as well. Kanpur is also known as Leather City of the World.
 Khurja is famous for its ceramics pottery; in fact, the entire state is famous for its pottery not only in India but also around the world.
 Lucknow, the capital, boasts of its cloth work and embroidery (chikan) work on silk and cotton garments.
 Bhadohi is known for carpets and also known as dollar-city; beside this, it is one of the highest revenue generating districts of UP.
 Moradabad is well known for its metal-ware, especially brass artifacts.
 Pilibhit is known for its wooden footwear (locally called Khadaon) and also for flutes made of wooden pipes. Flutes are exported to Europe, America and other countries.
 Saharanpur is known all over India and abroad for its wood-carving items produced there.
 Varanasi is famous for its Banarasi saris and silk. A banarasi sari is an essential part of any marriage in the state. 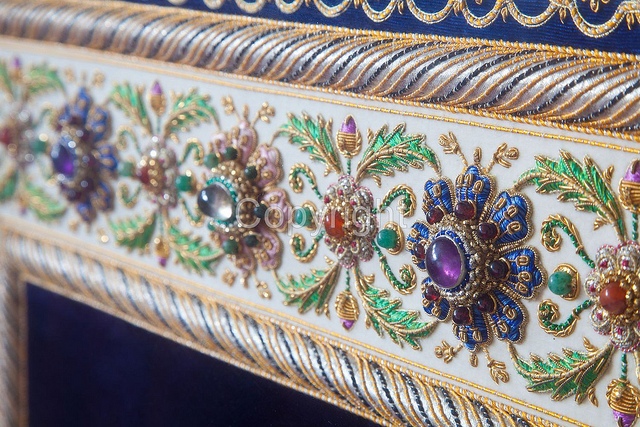