An epitome of sanctity that is Tungnath temple at the height of 3680 meters atop the Chandranath parvat. One among the Panch Kedars, Tungnath temple houses some of the most captivating vistas in the entire Himalayan region. The summit of Tungnath is the source of awesome waterfalls, which gives a rejuvenating vigor to the beholder.

As per the popular belief, Shiva’s hands were fallen of here at Tungnath during his struggle with Bhima, one of the Pandava brothers. The temple is set in the midst of a bewitching ambience where the Chandrashila peak guards the nature with its majestic allure. Unsurpassed beauty of the surroundings like the meandering paths flanked by rhododendron coppices and lush alpine meadows attributes the grandeur of the shrine furthermore.

The plain and dismal granite temple is not visible until you reach very close to it. Believed to be 1000 years old, this shrine gives you a feeling that you are with in the close proximity with the lord. Though smaller in comparison with the other temples of the Himalayan region, Tungnath temple houses all the structures of a typical Shiva Temple. The gushing kund, which bubbles up with sound waves are a fascinating allure to all.

Since the temple is located in the innermost regions of the Himalayas, a holy visit of the shrine demands a strenuous trek through dense forest and rocky terrain. Tunganath temple assumes a powerful and a stronger appearance like that of its chief deity, Lord Shiva. Along with the Shivalinga, one can also see a huge statue of Adisankara, Kalbhairav and Vyas. Temple premises also holds five smaller temple of 1.5 meters in height symbolizing the Panch Kedar.

Be you are a devotee or note it is quite sure that the holy premises of the temple would take away all your mental agonies and stresses. 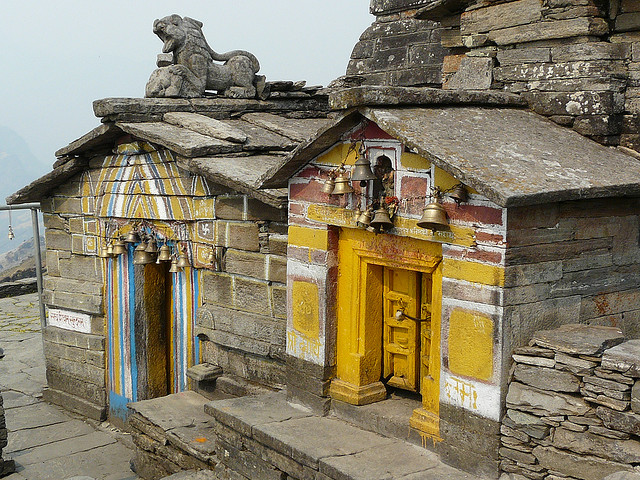