About 1700 years ago, Nagarjunakonda used to be a prosperous Buddhist town in Andhra Pradesh. What had been a successful centre in earlier times, has been preserved in the form of an island at present. Infact, it is one amongst the 20 major Buddhist sites in India. If you are traveling to Guntur, this place definitely warrants a visit. The island is to be found amidst Nagarjuna Lake, a man-made lake emerging from the Dam. Named after the Buddhist scholar Nagarjuna, the island is a replica of the ancient town of Nagarjuna Konda.

In 1926, this place was discovered by A.R. Saraswathi, who was a researcher in the Archaeological Survey of India (ASI). Further excavations carried out by ASI in the valley uncovered ruins of a university, viharas (monasteries), sacrificial altars, royal baths, marble carvings and sculptures. The prime attraction on the island is the museum that was designed as a Buddhist monastery in 1966. This museum houses all the collected works, which have been meticulously found. It embraces an omnibus of relics, friezes, jewellery, coins, statues and tools, from Paleolithic and Neolithic times.

At the time of dam's construction too, many artifacts were revealed. To save this site from submersion beneath the Nagarjuna Sagar Dam, all relics were collected brick by brick to contour the similar town. The remnants were relocated to the island and 'Anupa', a place on the banks of the lake. Anupa embraces a fort that dates back to the 14th century. You can also see stupas, monuments and temples like Sriparvata and Vijayapuri. Here, the stupas have dainty frescoes that depict scenes from life of Buddha.
A statue of Buddha that is somewhat ruined is the main attraction at Anupa. 'Mahachaitya' or the Great Stupa is an uncased stupa having plastered brickwork. It was renovated in the 3rd century by Chamtisiri, the Ikshvaku princess. This 'Chaitya' has sacred relics, like a tooth and an earring of Lord Buddha. During the 2nd century, Acharya Nagarjuna - a Buddhist Sage, who was the founding father of Mahayana Buddhism, lived here and propagated the philosophy of Shunyata (the void) in the Vijayanagar kingdom. 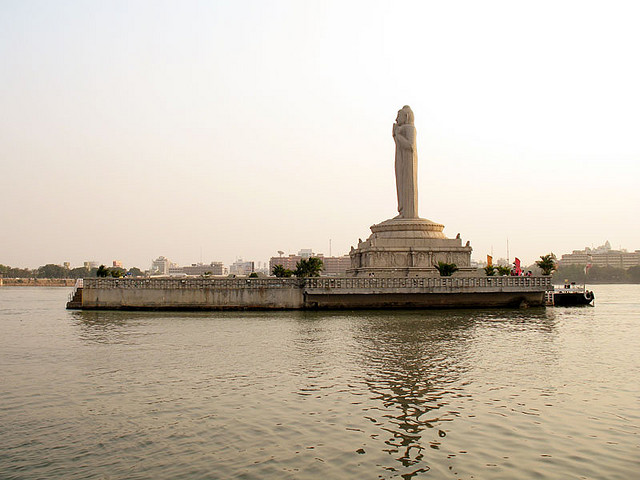