Rajasthani cooking was influenced by the war-like lifestyle of the Rajput and Brahmin inhabitants and the availability of ingredients in this arid region. Food that could last for several days and could be eaten without heating was preferred. Scarcity of water and fresh green vegetables have all had their effect on the cooking.Rajasthan is known for tough people and tough food.

Each region in India has its own traditional dishes and specialities. In the royal kitchens of Rajasthan, as well as most other states, food of Rajasthan is a very serious business and raised to the level of an art-form. Rajasthani cooking was influenced by the war -like lifestyle of its inhabitants and the availability of ingredients in this region.

Rajasthan is not only famous for its famous Palaces and Forts, its also has the traditions food and dishes to offer. They also had a large variety of delicious foods items which is really yummy for the visitors along the parts of the world.

The cooking style of in Rajasthan is somewhat been styled to a war-like lifestyle of the mediaval era of Rajasthan where the dishes are particualy depend on the availability of ingredients in the region. The food at the same time can last for several days and could be eaten without heating. Just like in the Desert of Jaisalmer, Barner and Bikaner, the dishes are prepared and cooked with a little amount of water. As the cooks use more milk, buttermilk, and clarified butter that makes the food remains eatable after several days. his style also known as the Maheshwari cooking uses mango powder and asafoetida as substitutes for ingredients not abundant in the desert like tomatoes, garlic and onions.

One of the best known Rajasthani dishes is the mixture of dals (lentils), ati (baked wheat ball) and churma (powdered sweetened cereal). Another distict local Rajasthani dish is their curry. The color of their is brilliant red and not the usual brown or gold in color. Despite its red color, it is not as spicy as the curries we know. Each region too in Rajasthan is known for their sweets. In Jodhpur, Mawa Kachori is a favorite; in Pushkar, there are Alwar Ka Mawa and Malpuas; Rasogullas in Bikaner and Ghevar in Jaipur.

Most of the eating style habbits of Rajput are influenced from Mughals. Thay have a simple grilled meat which is served on leaves, curries, kebabs and pulao that are served on silver platters for the royalty. (Pulao is a rice dish prepared with clarified butter, spices, meat and vegetables.). Another dish is the Chapatti. Chapatti is flat unleavened bread looking like a spoon because it is used as a scoop for various foods. The next dish is called the Puris. These are tasty fried wheat bubbles that can be eaten as snack, scoops for food and as complement to spicy foods. During the summer time they used Lassi or Buttermilk as beverage made by churning the natural yogurt and removing the butter content of the drink.

Land of Princes, as Rajasthan is called, shows off, many a fine gastronomic both within the palaces and outside. The royal kitchens of Rajasthan, the preparation of food was a very complex matter and was raised to the levels of an art form. Thus the 'Khansamas' (the royal cooks) worked in the stately palaces and kept their most enigmatic recipes to themselves. Some recipes were passed on to their descendants and the rest were passed on as skills to the chefs of semi states and the branded hotel companies.

Rajasthani cooking was inclined to the war-like lifestyle of the medieval Rajasthan and the availability of ingredients of the region. Food that could last for several days and could be eaten without heating was preferred, more out of necessity than choice. Scarcity of water, fresh green vegetables have had their effect on cooking.

In the desert belt of Jaisalmer, Barmer and Bikaner, cooks use a minimum of water and prefer, instead, to use more milk, buttermilk and clarified butter. A distinct feature of the Maheshwari cooking is the use of mango powder, a suitable substitute for tomatoes, scarce in the desert, and asafoetida, to enhance the taste in the absence of garlic and onions. Generally, Rajasthani curries are a brilliant red but they are not as spicy as they look. Most Rajasthani cuisine uses pure ghee (clarified butter) as the medium of cooking. A favourite sweet dish called lapsi is prepared with broken wheat (dalia) sautéed in ghee and sweetened. 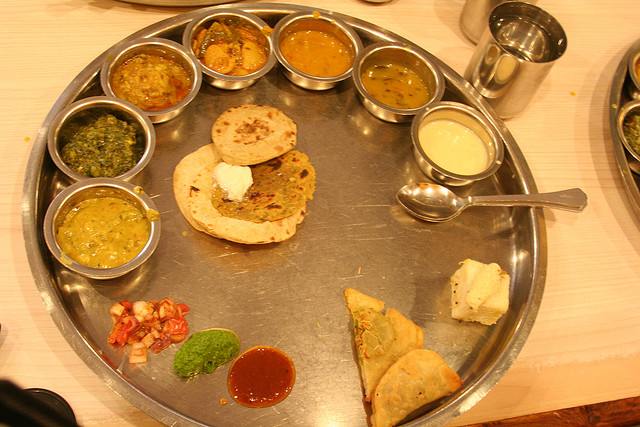