Warangal, also known as Orugallu, and Ekasila Nagaram, is bounded on the Northern part by the mighty Godavari River. It is a bustling city known for its dhurrie-weaving techniques. The place was the heart of Hindu Kakatiya Kings, who dominated the region until the beginning of the 14th century. The city is a cluster of three towns Warangal, Kazipet and Hanamkonda. 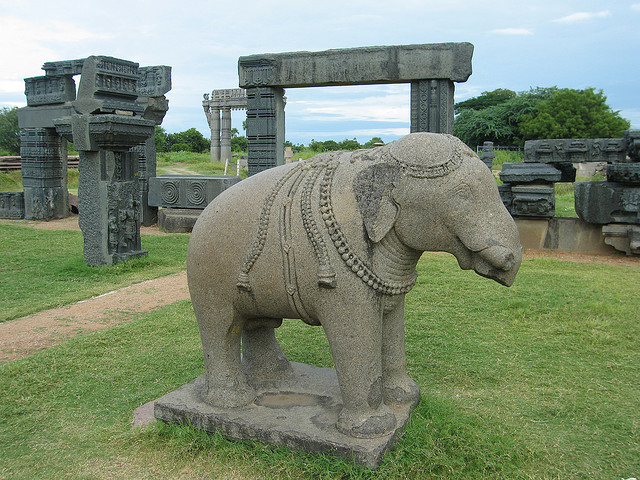 Warangal was the capital of a Hindu Shaivaite kingdom[citation needed] ruled by the Kakatiya dynasty from the 12th to the 14th centuries. The old name of this newly formed city is Orugallu. Oru means one and Kallu means stone. The entire city was carved in a single rock, hence the name Orukallu meaning 'one rock' (Ekasila nagaram in Sanskrit). The Kakatiyas left many monuments, including an impressive fortress, four massive stone gateways, the Swayambhu temple dedicated to Shiva, and the Ramappa temple situated near Ramappa Lake. The cultural and administrative distinction of the Kakatiyas was mentioned by the famous traveller Marco Polo. Famous or well-known rulers included Ganapathi Deva, Prathapa Rudra, and Rani (queen) Rudrama Devi. After the defeat of PratapaRudra, the Musunuri Nayaks united seventy two Nayak chieftains and captured Warangal from Delhi sultanate and ruled for fifty years. Jealousy and mutual rivalry between Nayaks ultimately led to the downfall of Hindus in 1370 A.D. and success of Bahmanis. Bahmani Sultanate later broke up into several smaller sultanates, of which the Golconda sultanate ruled Warangal. The Mughal emperor Aurangzeb conquered Golconda in 1687, and it remained part of the Mughal empire until the southern provinces of the empire split away to become the state of Hyderabad in 1724 which included the Telangana region and some parts of Maharashtra and Karnataka. Hyderabad was annexed to India in 1948, and became an Indian state. In 1956 Hyderabad was partitioned as part of the States Reorganization Act, and Telangana, the Telugu-speaking region of Hyderabad state which includes Warangal, became part of Andhra Pradesh.

By Air:The nearest airport to Warangal is Hyderabad located 140 kms away. Flights of Indian Airlines are available from Mumbai, Bangalore, Bhubaneswar, Calcutta, Delhi and Chennai.

By Rail: Nearest convenient railhead is at Kazipet 6 km. Warangal also has direct rail connections with all important cities of India. It lies on the Vijayawada-Hyderabad section of the South Central Railway.

Shopping in Warangal is a delightful experience and one should not miss it during the trip to the town. Warangal is known mainly for Lepakshi handicrafts, dharries, khadi items, brass materials, cheriyal scroll paintings and many other local items. Some of the famous shopping centres of Warangal are Khadi Gradmodyog Bhandar, DWRCA Bazaar and Hanamkonda.

You can visit the Lepakshi Emporium to buy handicrafts of the region…they are just so amazing and make great souvenirs too!

Limited but fine accommodation options are available at Warangal. All the hotels of Warangal provide a comfortable stay to guests. Some of the popular hotels of Warangal include Hotel Ashoka, Hotel Ratna, Hotel Shankar, Vijaya Lodge, Maheshwara Lodge, Radhika Lodge, Broadway Lodge etc.

Accommodation is limited here - government tourism hotels and private lodges here. The Hotel Ashoka in the city centre is the best in accommodation you will get in Warangal.