Shivanasamudra is a small town in the Mandya District of the state of Karnataka. The Shivanasamudra Falls is on the Kaveri River after the river has wound its way through the rocks and ravines of the Deccan Plateau and drops off to form waterfalls. The island town of Shivanasamudra divides the river into twin waterfalls. This creates the fourth largest island in the rivers course. A group of ancient temples are located here and there likely was a village.

Shivnasamudra which literally means “Shiva’s Sea” is a little hamlet situated amidst nature and is poupularly called as Bluff. Here the River Cauvery falls from a height in a deep rocky gorge in the form of two waterfalls collectively called as Shivanasamudra Falls which are the second highest waterfalls in India.
This tiny hamlet is surrounded by the dense forest of the Cauvery Wild Life Sanctuary and close to the 700 acre Shivanasamudra Island, the River Cauvery divides to form two falls- which during the monsoons swell to about a 1000 feet wide. The western branch of the river forms the Gaganachukki Falls and eastern branch forms the Barachukki Falls.

The Shivanasamudra Falls is a segemented waterfall where the water flow is broken in two or more channels before dropping of a cliff which results in multiple waterfalls, falling side by side at distances.
Shivanasamudra is the fourth largest island on this river course.

Shivanasamudram''s claim to fame is its magnificent waterfall which is truly spectacular. The River Cauvery splits into to two cascades here which flow into the same pool the western cascade is known as Gaganachukki and the eastern cascade is known as Bharachukki. The vista of so many cascading torrents of water will leave you spellbound, their mighty roar silencing all other sound and revealing natures immense power and beauty. The water, falling from such a great height creates a fine spray that is very refreshing. The coracle ride in the pool at the bottom of the Barachukki fall promises to be an unforgettable experience as the oarsman twirls the boat around, you can hear your heart pounding in your ears. 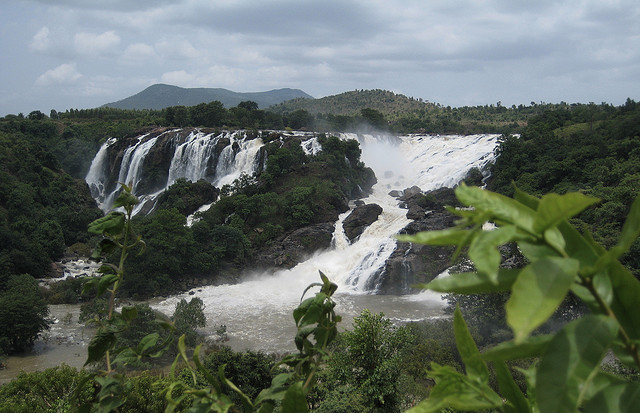 Air: The nearest airport is Bangalore international airport which is nearly 130 km away from Shivanasamundram. Bangalore is well connected to most of the airports in India and also is connected to many important cities abroad. Call taxi facilities and A/C tourist taxi facilities are available from Bangalore airport to Shivanasamndram. Call taxi charges about Rs 1200 and A/C tourist taxi charges about Rs 2000.

On your way to Shivanasamudram via Bangalore Mysore Expressway, you''ll pass through Channapatna, the town famous for wooden toys.

Accommodation here is limited to the Georgia Sunshine Village, with its homely and charming four cottage located on the estate of the Hatherell family.

Fishing: One can go out for fishing in Shivasamundram waterfalls, which is a paradise for travelers. The fishing locations in Shivasamundram are popular as home to the great 'Mahseer', the finest and the biggest tropical sporting fish known to man.

Other place here suitable for fishing is Georgia Sunshine village located in Shivanasamudram shirking the Cauvery Wildlife Sanctuary. A large number of fascinating water birds are attracted towards the tanks connected to the canals. These water bodies, teaming with various varieties of fish such as carp, snake fish, small masher and many such kinds, provide a nice opportunity for tourists to have fun fishing.

Trekking: Trekking through the banks of the most majestic and sacred river of South India - the Cauvery, meandering through the woody landscape amidst the forests of Karnataka, is an excellent experience for any of the trekkers. The river offers both adventure and opportunity for nature lovers.

Trekking is enjoyed in the rugged terrains covering Kaveri basins and around. This place is as isolated, rocky and as primitive as any place could be. An adventurous trekker can reach Georgia Sunshine Village, to have physically challenging treks, in the shrub jungles among tedious hills converged with farmlands of coconut and other seasonal crops. This very rugged terrain makes it a true paradise for the adventurous trekker.