Sariska, nestled among the Aravalis, is the closest place from Delhi where one can hope to see a Tiger in it's natural surroundings. It was once the hunting grounds of the Maharajas Sariska was made into a forest reserve in 1955 and declared a National park in 1982. It is the heritage of the former rulers of Alwar. 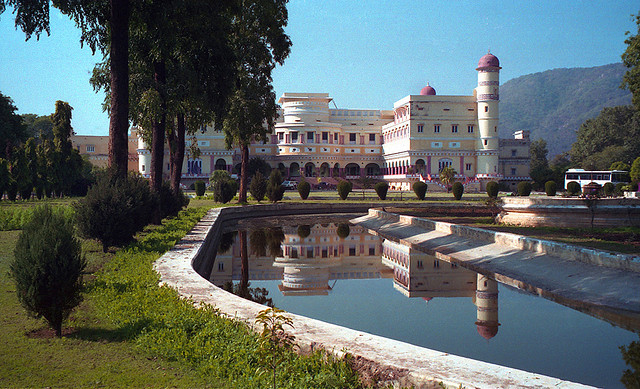 The history of Sariska goes back as early as the 5th century BC as Hindu sacred texts mention Sariska as the region where the Pandavas took shelter during their years of seclusion. In the middle ages, it was under the Mughal rule and Aurangzeb used the Knakwari Fort to imprison his elder brother.

Originally said to be a part of the Mewat region, the brave Mewat warriors were always at war to preserve its sovereignty because its strategic location made it a prized conquest for many rulers. Later During the 8th - 12th century many of Sariska's rulers and wealthy residents constructed a huge number of Jain and Hindu temples, some of which retain their old splendor even today. Early 20th century saw attempts to convert the region into a protected area and the campaign was led by none other than Maharaja Jai Singh. The campaign bore fruit and in 1958, a government notification declared Sariska a wildlife sanctuary and by 1979 it became a part of the Tiger Project that was recognized as a national park.

Road: Sariska is connected by regular bus services to other cities in and around. Many public transport buses connecting Sariska with Jaipur (100 km) and Alwar (36 km). Private bus services are available from Sariska to Delhi (240 km).

Sariska is one of the best wild life sanctuaries in India. Shopping is not really on the itinerary of tourists heading for this tiger reserve. However for those who would want to take home souvenirs and curios typical of India, the ideal place to shop would be the city of Jaipur.

Jaipur is famous for its jewelery made of precious and semi-precious stones. Also known are Jaipur textiles especially the bandhej (tie and dye print), brass work, antiques and marble carvings.

The metro city of Delhi would also be a good shopping destination where you can stop enroute to Sariska. Alwar, which is the nearest city to Sariska, is also a good stopover to pick up typical ethnic stuff from Rajasthan.

Hotels in Sariska are comfortable and reasonably priced. Sariska offers a range of accommodation from forest lodges and government tourist bungalows to heritage hotels, which were once the residence of the Maharajah of Alwar.

Some of the prominent hotels in Sariska are:

* Hotel Sariska Palace, the former royal residence of the Maharajah of Alwar

# Hotel Tiger Heaven
Budget accommodations can be found at Alwar, which is about one hour away from Sariska.

Jungle Safari: The mornings and evenings are the busiest periods in a day and the same holds true even in the forests. The Jungle Safari organized for groups from the guest house or from the entrance is a thrilling ride full of amusement and trepidation throughout. It's the dawn and dusk period when the wildlife ventures out of compulsion towards one of the many water holes scattered around the Park. The Game is not the correct word to describe these extremely beautiful creatures that roam fearlessly in their own domain thus providing the tourists the best chances of an awe inspiring spectacle. A few of these watering holes also cater for reserving the hides (screened places) located snack in the middle of the best spots of activities or the best traversed routes. It is possible to view various carnivores viz. Leopard, Hyena, Jackal, and of course the Tiger. The mincemeat for these carnivores such as Sambar, Chital, Chausingha and Wild Boar are also visible. A Jungle Safari is bound to return at least a view of the bird kingdom with Pea fowls, Grey Partridges, Tree Pies, and Golden backed Woodpeckers, etc in abundance. October to April is considered the best part of the year to visit here however the park offers the goodies throughout the year.

Indulge in Bird Watching
Apart from a large variety of wild animals, Sariska also offers you a rich variety of birds, resident as well as migratory. Golden-backed woodpecker, tree pie, peafowl, crested serpent eagle, sand grouse, the great Indian horned owl, grey partridge, and bush quail, are some of the species that you can easily spot inside the national park.

Explore the Heritage
In the past, Sariska served as the home of the rulers of Alwar and has witnessed some royal times. Serving as a testimony to this fact is the Kankwari Fort, where Mughal emperor Aurangzeb imprisoned his elder brother, Dara Shikoh. Apart from that, there is a palace in the sanctuary, along with an ancient Shiva temple, both of which are worth having a look at.