Situated in the center of Madhya Pradesh, Omkareshwar sits pretty at the union of Narmada river and Kaveri river. The island derives its name from the holiest Hindu symbol 'Om'. The island has two soaring mountains which are divided by a steep valley. The division is in such a way that the shape of island resembles the shape of 'Om' when seen from above. The place is a must visit for any devotee of Lord Shiva as one of the 12 Jyotirlingas is present here in the Shri Omkar Mandhata Temple. Nature also has been quite generous on Omkareshwar. On the south and eastern side of the island there are cliffs of over 150 m that perfectly compliments the architectural charm of the many temples.

Omkareshwar, the sacred island, shaped like the holiest of Hindu symbols, 'Om', has drawn hundreds of generations of pilgrims. Here, at the confluence of the rivers Narmada and Kaveri, the devout have gathered to kneel before the Jyotirlinga (one of the twelve throughout India) at the temple of Shri Omkar Mandhata. And here, as in so many of Madhya Pradesh's sacred shrines, the works of Nature complement those of man to provide a setting awe-inspiring in its magnificence.

Omkareshwar is formed by the sacred river Narmada. This is one of the most sacred of rivers in India and is now home to one of the world's biggest dam projects.

Being on the banks of a river, the climate here is generally pleasant, though the temperature can be a bit high during peak summers. Shopping is a major activity that you can indulge in here. An array of shops line the streets around the temples. You can buy locally made handicrafts and many religious items too. 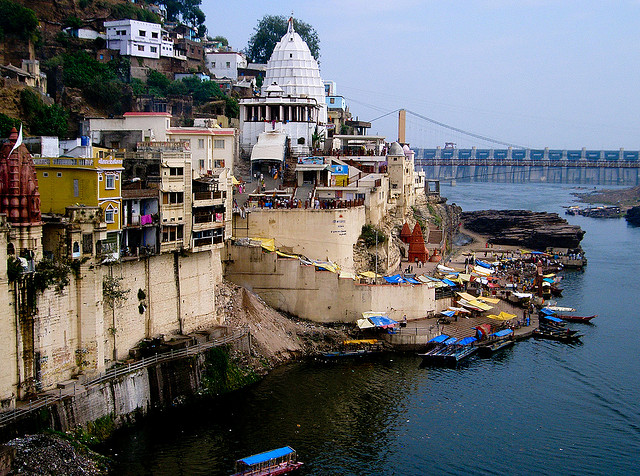 Omkareshwar is the result of the diversion in the river Narmada which caused it to branch its flow into two. The shape of the island is in the form of the sound Om sound of Omkara. According to legends, Lord Vindhayas had prayed to Lord Shiva, and they got the town of Omkareshwar as a present. In another mythological fable, the Shivalingas on request of the Devas, were broken into two parts. One was the Omkareshwar temple and the other being the Amareshwar.
Raja Mandhata of the Ishvaku clan is believed to have been worshipping on the very land. The cave here is supposed to have been the abode of Govinda Bhagavatpaada, the guru of Sankaracharya. These are some of the most popular legends of the town. However, every person will tell about his own set of beliefs and mythology.

Air: Indore airport, which is 77 km away from Omkareshwar, is the nearest airport. Indore is connected to major airports in India including Mumbai, Kolkata and Delhi. Taxis are available from the airport to Omkareshwar, it takes about 2 hours journey and fares about Rs 1800.

Road: State owned bus services are available to Omkareshwar from major cities like Khandwa (60 km), Ujjain (133 km) and Indore (77 km). Omkareshwar is situated at distance of about 884 km from Delhi. Many private luxury buses are available on this route.

Omkareshwar Parikrama: As per Hindu mythology, walking around any sources of positive energy would proffer one with the same positive energy. So from time immemorial, walking around in a clockwise direction of something, which has positive energy, is a well-acclaimed practice.
The popular belief is that circumambulating the sacred temple of Omkareswar would fetch boons and wipe out all the sins of those who had undertaken such parikrama. Apart from the jyothirlinga, the presence of holy river Narmada adds the parikrama a worthy affair. Narmada is believed to be the daughter of Lord Shiva and regarded as the purest of all other rivers. Since it is a customary practice of a Shiva devotee to take a parikrama of Narmada.

Omkareshwar is situated on the holy banks of this sacred river and hence walking around the shrine would proffer dual benefits to the devotee. It is rather a testamentary custom than an alluring attraction. Most of the people who prefer a parikrama here at Omkareshwar would definitely give preference to its religious aspect than the scenic ambiance through which they walks around.

Apart from its spiritual facets, Omkareshwar parikrama would provide an enthralling experience with its picturesque settings.