Situated in the northern part of Madhya Pradesh, the town of Khajuraho has been recognized as a world heritage site by UNESCO. The town is famous for its imperial temples. The temples were built by the rulers of Chandela dynasty between 10th and 11th century. The construction of the temple just took around 100 years to complete. There were around 85 temples in the area but now only 22 exist. Rests are nothing more than ruins. They sure have gained popularity due to the erotic sculptures carved on the walls. However such sculptures cover only a small portion. The major share of sculptures are depicting the daily life of people in the rural India.

Known as the Temple city of India, Khajuraho is world famous for its intricately carved, beautiful temples in stone. A symbol of India's glorious past, heritage and culture, the temples symbolize an immortal saga of Hindu art and culture.

Situated south east of Delhi, modern day Khajuraho was a large city of the Chandelas in the ancient age. Legend has it that Hemvati, the daughter of Hemraj, the Royal priest of Kashi, got a son from the Moon God, who came to be known as Chandravarman and became the King of Khajuraho.

Khajuraho was considered to be a seat of religion and learning by the Chandelas and hence this place is the guardian of some of the most exotic temples in the whole of India. Among the 85 original ones only 22 have survived the ravages of time. 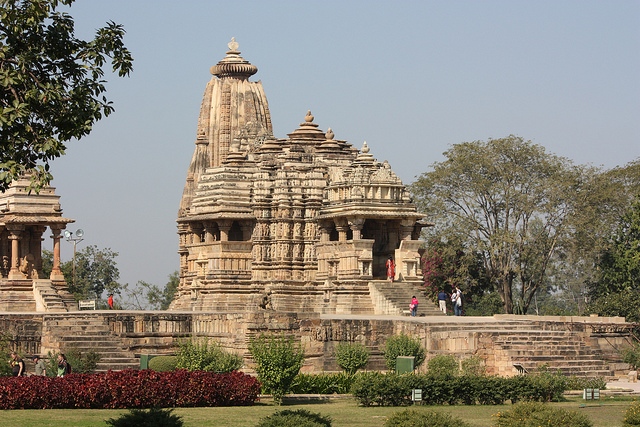 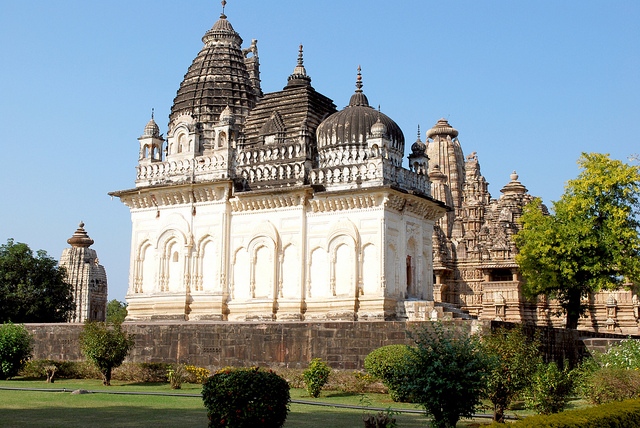 Once the capital city of the powerful Chandela Rajputs, a clan, who claimed their ancestry from the lineage of the Lunar powers, the various temples in and around Khajuraho were constructed over a period of 100 years, a period which stretched between the years 950 to 1050.

After their initial spell at this beautiful city, the Chandelas moved their capital to the neighboring city of Mahoba, a move which, however, failed to put a stop to the rise of the city of Khajuraho, though, however, for some time.

At her peak, Khajuraho consisted of around 80 Hindu Temples, most of which are today, however, sadly in ruins. The 22 temples, which even today stand strong, as a poignant message from the age of past, however, manage to convey to us, the grandeur which has caused the complex to be certified as an UNESCO World Heritage Site.

Air: Khajuraho airport is well connected to many cities in India, like Delhi, Mumbai, Varanasi, Bhopal, Indore, Allahabad and Mumbai. All air service providers have flights from Khajuraho to other cities. International travelers can get connection flights to Khajuraho from Mumbai or Delhi.

Rail: Nearest railway station to Khajuraho is Mahoba which is located at 63 km from Khajuraho. Harpalpur is another nearby major rail head, which is connected to most of the railhead in India. It is nearly 90 km away from Khajuraho. Pre-paid taxis cost nearly Rs 1200 from Mahoba and Rs 2000 from Khajuraho.

Road: Khajuraho is one of the cities well connected by public and private buses. Private tour service operators arrange deluxe AC and Non AC buses to Khajuraho from various cities including Jhansi (172 km) and Delhi (596 km). Tourist deluxe buses will charge about Rs 3 to Rs 4 per km.

As regards shopping, there is nothing specific for which Khajuraho is popular. Yet, the place is a good one to buy souvenirs and exquisite handicraft items of local artisans. There are a number of small stalls outside temple gates selling interesting souvenirs. Tourists interested in buying attractive silver and brassware can make a trip to Rajinagar at a distance of 5 kms from Khajuraho town. A weekly market is held in the place on Tuesdays.

There are metal wares, dhokra pieces of art, jewelry, bamboo articles and artifacts that reflects a traditional chromaticism. The tribal artifacts are the best here. Look for the unique textile fabrics and potteries that will sure make your eyes go wild with desire. You should always buy the small stone images of the gods and goddess. Ethnic weaving style and printed dress material of Khajuraho are also renowned all over the world.
Since it is not a big town, but a small village, so the bazaars are mainly located in the heart of the village. There are basically local shops that display the selling items and there is not a better option than buying it from them.

Khajuraho is a prime destination in India, which draws a huge number of tourists every year from across the world.

The city is small and the shopping areas are few.

 The major one being in opposite the temple complex near the Gole Market.
 Also hang out at Oswal Complex and City Center for shopping in Khajuraho. Both are located close to the city center.
 Apart form the government emporia, numerous private outlets where you would also find usual assortment of various crafts from all parts of Madhya Pradesh.

As a tourist destination, Khajuraho has gained tremendous popularity all over the world. There are a number of hotels in Khajuraho. Majority are private run hotels, along side a few government run properties. In all budgets, hotels in Khajuraho offer a range of options.

If you miss the most important event of the town then there is no way you can repent. So visit this town during the month of February and March, when the whole town is flooded with the preparation to hold the biggest dance festival of the nation. This annual week long celebration involves dance and music performances by the revered classical dancers and singers. The major dance styles that are displayed are Kathak, Bahratnatyam, Kathakali and Odissi. Besides these performances there are also workshops and seminars organised by the artisans of the country. An open market held here displays the local handicrafts. Do not miss buying these local artifacts that are native to Khajuraho and will not be available anywhere else.

Maha Shivratri that clashes with the Khajuraho festival, is also a very important festival of the people. This festival marks the marriage of Lord Shiva with Maa Parvati and during this festival the 2.5 m tall lingam in the Kandariya Mahadeo temple and it is appareled as a bridegroom, with white and saffron dhotis, and a huge, conic, silver paper crown is placed. The overnight ceremony is performed by the son of the chief priest who consecrate the lingam with sacred water. The chanting of hymns continues throughout the night, until the Brahmins stand and throw leaves and flower petals over the lingam. This ritual of throwing the leaves and petals is the sign that the wedding is complete. This celebration is aberrant to anywhere else in India, so you must see it being performed with your own eyes.