Kanha is know world wide for its national park and is ideal for spotting the wild animals. Apart from this Madhya Pradesh store lots for the tourists. The town is famous for its varied wildlife and various historical sights. The historical items are displayed in the museum which gives the detailed background of the place and its significances. The green vegetation of sal teak and other forest trees explain the lush green atmosphere of the national park. Kanha is a tourist friendly place which pampers the tourists and gives them all the opportunity to spend their time in the pure nature.

Apart from the Kanha National Park there are other tourist attractions in Kanha . As history lies in every corner of the country so Kanha is not the exceptional one. The people and its natural beauty stay in its innocence. There are other places like Kanha museum and Bamni Dadar. 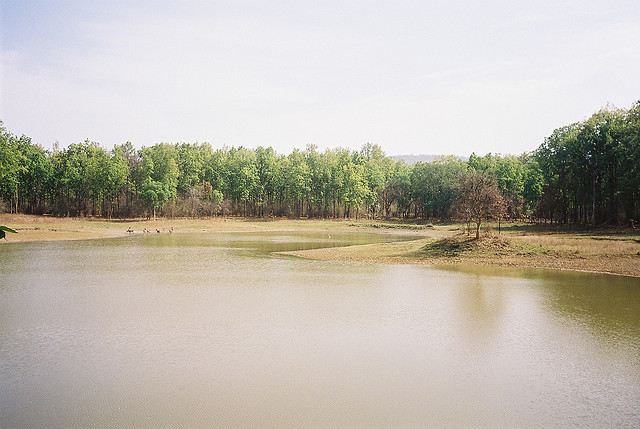 During the last years of the 19th century, the dense forests of the Maikal hills were a favorite hunting ground of British officers and local rajas. Surrounded by the River Narmada, the Hallon and Banjar valleys were rich in tigers, swamp deer or Barasingha, deer and leopards. However, unmindful hunting and rampant deforestation led to a near wipeout of the regions wildlife. In 1931, the British administration declared a moratorium on hunting in this region and declared is a wildlife sanctuary in 1933, limited to an area of 250 square kilometers. Two years later, 300 square kilometers of the Hallon valley were added to this sanctuary and conservation methods stepped up.

Post-independence, the Government of India notified the Banjar sanctuary as a National Park in 1953, and renamed it Kanha covering an area of 253 square kilometers. In subsequent years, more parts of Mukki valley and Kisli were added.

In 1973, Kanha was one of the original parks to be enlisted with Project Tiger at its launch in 1973 CE. A powerful predator, tigers are at the top of the food chain and efforts for their conservation encompass the entire eco-system of the region. Of the 28 parks now a part of Project Tiger, Kanha has done particularly well. Based on the tiger census figures of 2007, Kanha’s tiger population stands at 131.

Following the success of Project Tiger, the government added more of the surrounding areas to the park and handed the management of the park to a centralized Kanha Tiger Reserve in 1983. However, a period of decline followed and the animal population of the reserve started to go down. In 1995, the park adopted a core-buffer strategy: wherein 940 square kilometers of the park were designated as the core area to be surrounded by a buffer zone.

Besides the protected animals of the reserve, the region was home to two indigenous tribes: the Gonds and Baigas. Originally residents of the park’s core area, these tribes practiced subsistence agriculture. But rising population put pressure on the forest brought them in frequent interaction with the tigers. This had an adverse affect on the animals, and since 1960, these villages have been relocated out of the core are to the buffer zone.

Air: Nagpur airport which is about 265 km away is the nearest airport to Kanha. Nagpur is connected by air to Mumbai, Pune and Chennai. Major international airport near to Kanha is Mumbai airport, which is connected to all major cities in India and many cities in abroad. Nagpur to Kanha cost about Rs 4500 by Taxi.

Rail: Nearest main railway stations is Jabalpur, which is 169 km away from Kanha. Jabalpur is a major station connecting to all railheads in India. Cab charges about Rs 3000 from Jabalpur to Kanha

Shopping in Kanha can only be for basic goods. However shopping can be done in the old markets at Jabalpur on the way to or from Kanha.Shopping can also be done at Nagpur where your shopping spree can be as wide ranging as in local markets like Sita buldi or Itwari or at branded stores and shopping malls like Pyramids or Westside.

For souvenirs of your tiger safari, you can stop at the the gift stores near the gates. Items of interest include tiger keychains, portcards, calendars, wildlife books, and other local handicraft.

The hotels in Kanha have a range of accommodation to offer the tourist who comes to Kanha on a tiger trail. Kanha is famous for its adventure tourism with its world-renowned population of tigers. The hotels also have tour packages, which provide the tourist excellent opportunities for observing the magnificent tiger in the wild.

Some of the prominent hotels are:

Jungle Safari: An enthralling wild life experiences that is what the Jangle Safari in Kanha offers to the visitors. Watching the wild animals in their natural habitat provides a rejuvenating feel to every body. Gazing through the park in an open vehicle offers the imposing and passable sight of the beautiful setting and to grab hold of every species that may just slink into the meadows and to pay attention to the jingle of the natural world.

The vehicles are prettily designed to suit the ambiance of the park so that it would not make any alarm to the peaceful life of the inhabitants. A stride through the meandering pavements is a memorable extravaganza that would provide some of the beautiful sceneries of the jungle world. Jungle Safari in the Park allows the visitor a two-fold option to have a ride. Park provides the service of an expert guide.

Jungle Safari in the morning time lasts for 4-5 hours and the duration is slightly reduced by one hour in the evenings. The experience of seeing the wild animals in their normal environment would be an unforgettable and a rare feeling. Through out the safari, your ears would be echoed with the roaring and deafening sounds of different animals.

The lodge in the safari path offers an all-embracing library with wildlife books, videos and magazines. With nature walks, bird watching, and village walks and Tribal dances jungle safari in Kanha would be a worthy watch spectacle which would be experienced at least once in a lifetime.