It is the longest bridge in southern India. It connects Rameswaram Island to the main land. It's constructed over the bay. It is 7 kms away from Rameshwaram and is also called the Pambam Bridge as it is located beside Pamban, the sacred place where Rama could quench the thirst of Sita by throwing an arrow in the place where they could actually retrieve cool water.

The British built the bridge in 1913-14 across the Palk Strait dividing India and Sri Lanka for a regular train service when they decided to hire workers from Tamil Nadu to tea plantations in the island nation.

The Pamban Bridge connects Mandapam at the edge of south India to Pamban Island on the Bay of Bengal where Rameswaram thrives. Until 1911 people crossed by boat to visit an ancient Ram temple at Rameswaram, 600 km south of Chennai.

At Dhanushkodi, the Indo-Ceylon Express and the Rameswaram Express disgorged thousands, and they took a 20-km Irvin and Goschen steamer ride to and from the emerald island for work and marriages.

A railhead at Thalaimannar, on the Sri Lankan side, took the labourers to the highland estates.

The rail track also brought to Rameswaram trains full of pilgrims from Gujarat, Uttar Pradesh and Bihar - almost entire villages travelling together to make that once-in-a-lifetime trip to the Ram temple at the very place from where the Hindu god is said to have launched his battle against Ravana.

A cyclone in 1964 washed away the track from Rameswaram to Dhanushkodi as well as a train full of people. Several grids of the Pamban Bridge were broken. 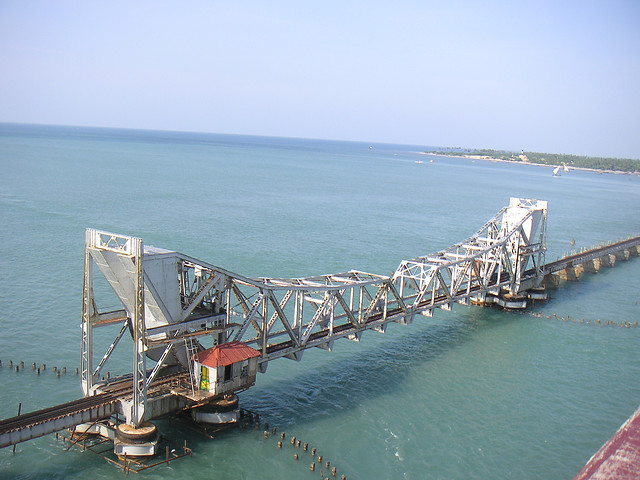