Dance culture of Assam also represent another facet of Assam rich culture. There are two well known dance form in Assam, namely the Bihu Dance and the Sattriya Dance. Bihu dance is mostly performed during the Bihu festival and Sattriya Dance is a classical form of dance often termed together with the most popular classical dance of India like Kathak, Bharatnatyam etc.

Heritage of Classical dance in Assam is of remote origin. In Assamese dances, Hastas (hand gestures), Shirokarma (movement of the head), Padachari (foot work), Karana (posture), etc are performed after the manner of Natya Shastra or Sanskrit treatises on dance. The foot-work in an Assamese classical dance is extremely intricate and is called "Gati" or "Belan". It always reflects the theme of the dance in its infinite variation, speed and pattern. There are "Hasti Bulan", i.e. the slow majestic steps of the elephant, "Ghora Bulan", i.e. the swift galloping steps of the horse, "Maira Bulan", i.e. the majestic steps of a peacock and so on. There are several kinds of "Karanas" or "Bhanges", i.e. poses of the body in an Assamese dance. They are expressive of meaning and require to be mastered by long practice. Those postures of the body accompany the movements of the head, neck, eyes and feet. The mastery of the movements is a matter of long practice under expert guidance. The hand gestures is called "Hasta", commonly known as Mudras. They are performed either with a single hand (Asanguta Hasta) or with both the hands (Sanjuta Hasta). Those gestures that are expressive of meaning are called "Shree Hastas" and those performed only for the sake of beauty and rhythm are called "Nritta Hastas". The combination of all the Hastas will be nearly one hundred.

The indigenous classical dance forms of Assam or Asamiya Margi Nritya has been classified into; 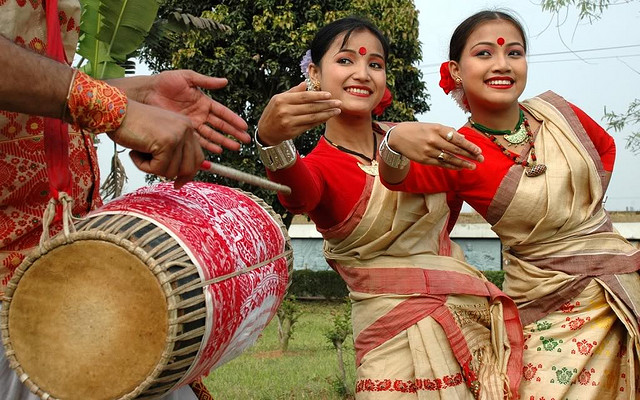