The dances, performed by the tribes of Arunachal Pradesh, have been broadly divided into four groups. The first group is the ritual dances which may again be divided into five sub-groups. The first sub-groups includes those dances which form part of the various rituals performed to secure prosperity, good health and happiness of the dancer, his family, village or the whole community. The second sub-group comprises of those dances performed in ceremonies related to agriculture and domestication of animals to secure a good harvest and increase of domestic animals respectively. The third sub-group is associated with the funeral ceremony when the soul is guided by a priest to its abode in the land of the dead and to prevent it from haunting its old residence. It is generally believed that if the soul returns to its old home the bereaved family suffers diseases and deaths. The fourth sub-group consists of the fertility dances. These are magical in the sense that the imitation of the movements of coition is believed to promote fertility. War-dances make the fifth sub-group, which are on the decline with the stoppage of internecine feuds and raids. In the old days, when an expeditionary party was successful in killing an enemy or more, the victors used to perform a ceremony on return, so that the spirit of the slain could do no harm to the slayer. Only among the Idu Mishmis, the victim's family also used to perform rites praying for success in taking vengeance. Dance formed a part of this ceremony. The war-dance used to be prevalent among almost all the non-Buddhist tribes. 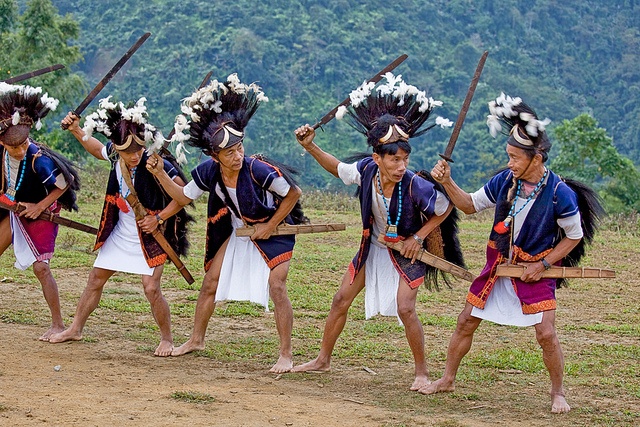