The people of Rajasthan live life to the hilt. After hard work in the harsh desert sun and the rocky terrain whenever they take time off they let themselves go in gay abandon. There is dancing, singing, drama, devotional music and puppet shows and other community festivities which transform the hardworking Rajasthani into a fun-loving and carefree individual. Each region has its own folk entertainment, the dance styles differ as do the songs. Interestingly enough, even the musical instruments are different.

Rajasthan is culturally rich and has extensive tradition in art and culture, which reflects Indian way life. The dance, music and art forms have been watchfully cultivated and patronised by the erstwhile courts. An equally rich and varied folk culture from villages is both fascinating & mesmerising.

The music is of uncomplicated innocence and songs depict day-to-day relationships and chores more often focal around bring of water. Rajasthan's cultural tapestry takes in simple folk to highly cultivated classical music and dance in its own distinct style.

Of considerable significance are the devotional songs and the communities who render these songs. Professional performers like the Bhaats, Dholis, Mirasis, Nats, Bhopas and Bhands are omnipresent across the state. They are patronised by the villagers who participate actively in the shows put up by these travelling entertainers. 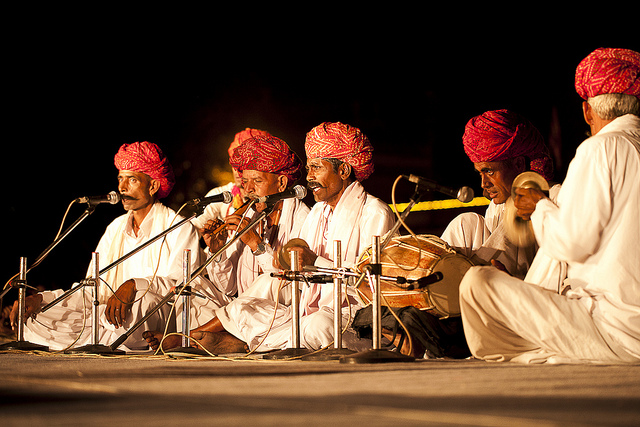