Gujarati cuisine refers to the cuisine of the Gujaratis from India, who are predominant in western-India. It is primarily vegetarian. The typical Gujarati Thali consists of Roti (a flat bread made from wheat flour), daal or kadhi, rice, and sabzi/shaak (a dish made up of different combinations of vegetables and spices, which may be stir fried, spicy or sweet). Cuisine can vary widely in flavor and heat, depending on a given family's tastes as well as the region of Gujarat they are from. North Gujarat, Kathiawad, Kachchh, and South Gujarat are the four major regions of Gujarat that all bring their own style to Gujarati food. Many Gujarati dishes are distinctively sweet, salty, and spicy at the same time. They can also be very oily.

Staples include homemade pickles, Khichdi (rice and lentil or rice and mung bean daal), and chhaas (buttermilk). Main dishes are based on steamed vegetables and daals that are added to a vaghaar, which is a mixture of spices sterilized in hot oil that varies depending on the main ingredient. Salt, sugar, lemon, lime, and tomato are used frequently to prevent dehydration in an area where temperatures reach 50C (120F) under the shade. It is common to add a little sugar or jaggery to some of the sabzi/shaak and daal. The sweet flavour of these dishes is believed to neutralize the slightly salty taste of the water.

The cuisine changes with the seasonal availability of vegetables. The spices used also change depending on the season. Garam Masala and its constituent spices are used less in summer. Regular fasting, with diets limited to milk and dried fruits, and nuts, are commonplace.

In modern times, some Gujaratis have become increasingly fond of very spicy and fried dishes. There are many chefs who have come up with fusions of Western and Gujarati food.

A very healthy[citation needed] meal popular in the villages near Saurashtra during the cold winters consists of thick Rotis, termed Bhakhri, made of Wheat flour, garlic chutney, onion pieces and Buttermilk. It is a good[citation needed] source of energy which suits low-income villagers working on their fields in the cold days.

Sweets (desserts) made from such ingredients as local sugar cane, jaggery (a solid made from unrefined cane sugar), milk, almonds, and pistachios were originally served at weddings and family occasions as an instant energy booster for relations travelling long distances to attend.

With so much variety in vegetarian food, the Indian British cookbook writer Madhur Jaffrey has termed Gujarati cuisine as "the haute cuisine of vegetarianism" in 'Flavours of India', one of her TV shows about Indian food. 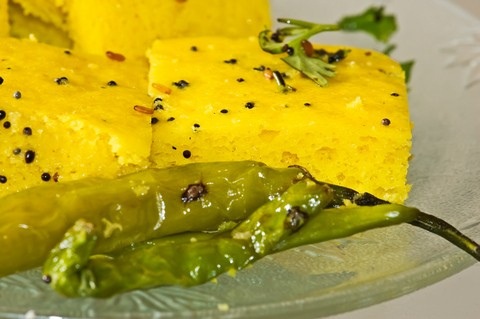